On the day following the elections, President Obama urged policymakers not to forget about climate change. While he ideally would like to get help from the Congress in enacting legislation aimed at curtailing greenhouse gas emissions, he seems willing to let EPA do the heavy lifting in the absence of Congressional action. He is also looking to the states that the United States citizenry does not want to have done collectively.

In his post-election press conference last Wednesday, November 3, 2010, the president gave some clues about what his future aspirations are for a climate/energy policy. It was most obvious in his response to a question put to him by the Wall Street Journal’s Laura Meckler, and indicates that his Dream Green Team playbook is still alive and well.

Thank you, Mr. President. You said earlier that it was clear that Congress was rejecting the idea of a cap-and-trade program, and that you wouldn’t be able to move forward with that. Looking ahead, do you feel the same way about EPA regulating carbon emissions? Would you be open to them doing essentially the same thing through an administrative action, or is that off the table, as well?

With respect to the EPA, I think the smartest thing for us to do is to see if we can get Democrats and Republicans in a room who are serious about energy independence and are serious about keeping our air clean and our water clean and dealing with the issue of greenhouse gases—and seeing are there ways that we can make progress in the short term and invest in technologies in the long term that start giving us the tools to reduce greenhouse gases and solve this problem.

The EPA is under a court order that says greenhouse gases are a pollutant that fall under their jurisdiction. And I think one of the things that’s very important for me is not to have us ignore the science, but rather to find ways that we can solve these problems that don’t hurt the economy, that encourage the development of clean energy in this country, that, in fact, may give us opportunities to create entire new industries and create jobs that—and that put us in a competitive posture around the world.

So I think it’s too early to say whether or not we can make some progress on that front. I think we can. Cap and trade was just one way of skinning the cat; it was not the only way. It was a means, not an end. And I’m going to be looking for other means to address this problem.

And I think EPA wants help from the legislature on this. I don’t think that the desire is to somehow be protective of their powers here. I think what they want to do is make sure that the issue is being dealt with.

Clearly Obama seems hopeful that Congress will step in and do the dirty work, but the threat of using the EPA to carrying the entire load is only thinly veiled.

However, going the EPA route is not going to be any easier than going the Congressional route.

A just-issued report by the Deutsche Bank Climate Change Advisors (DBCCA) summarizes the many climate-related lawsuits in the U.S. court system and highlights a large uptick in the number of lawsuits brought against the EPA in 2010.

The DBCCA provides these key points in summary of their analysis:

• The number of climate change lawsuit filings doubled between 2006 and 2007. They then reached a plateau for three years, but already in 2010 are on a path to triple over 2009 levels.

• The largest increase in litigation has been in the area of challenges to federal action, specifically industry challenges to proposed EPA efforts to regulate greenhouse gas emissions.

• From 2001 to date, 24% of total climate change-related cases were filed by environmental groups aiming to prevent or restrict the permitting of coal-fired power plants.

• Approximately 37 states have joined, or have stated their intention to join, either side of the EPA litigation challenge.

Figure 1, taken from the DBCCA report, shows the number of climate change lawsuits brought each year, divided into categories. The big jump in 2010 is obvious. While the filings have been dominated by activists groups in prior years, the tables were turned this year as industry groups have responded with their own lawsuits—mostly against the EPA and its subsequent rulemaking. 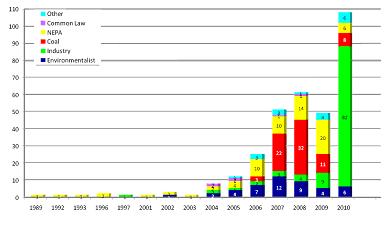 Figure 1. Climate litigation with time (through October 8, 2010) (taken from the DBCCA report).

And this is probably just the beginning of lawsuits against the EPA. As the DBCCA report puts it:

Every further move taken by the EPA is likely to be challenged in court by industry.

Therefore, is little wonder why Obama would like Congress to take up the issue.

Hanging energy legislation around the neck of climate change should be a losing proposition, as I have argued many times previously, and thus far it has been. And as others have argued here at MasterResource, the other ‘benefits’ of a ‘clean’ energy policy also seem vaporous.

So while Obama seems resigned that the cap-and-trade horse is dead (although there is still a possibility that the lame-duckers may take a few additional swipes at it), he obviously is eager to start another round-up. Whether what he manages to harness proves to be a stakes winner or a claimer remains to be seen, but it is important to remember that we all have a horse in the race, and thus the actions of the race organizers bear close watching.