“[The plan] is a sign to the industry that the Obama administration is serious about exploration.”

The subtitle to Ms. Dlouhy’s piece was “Environmental groups and GOP are critical, while oil patch is wary.” Pouring over the 300 comments on this article, Chronicle readers know a bait-and-switch and Trojan Horse when they see it (energy-savvy Houston, after all). Maybe some of these same readers fear what I do: a wishy-washy editorial from the Chronicle on how Obama’s drilling plan is a ‘good beginning’ and ‘reasonable compromise’.

Now to Dr. Yergin, the industry expert and author who seemed to have come a long way from Energy Future (1979)  to The Commanding Heights (1998). And to his credit, Yergin has been very good on the “peak oil” issue, bringing into play a lot more knowledge and facts than possessed by the peak-oil community (including Matthew Simmons). (Our Michael Lynch has blogged regularly on this issue at MasterResource and is still waiting for acceptance of a related bet with the slippery Joe Romm of ClimateProgress.)

Yergin, however, has always been very politically correct when it comes to the company in power (Enron) or the government in power (Obama). He is an influence- and profit-maximizer, in the final analysis, and sometimes that can interfere with the intellectual side of things.

I remember from my Enron days how CERA was making money off of its climate consulting services where alarmism and policy activism were not to be questioned. (I participated in their conference calls.) The annual CERA conference–easily the most important event of the year for the energy industry–would feature alarmists and influence peddlers (such as Eileen Claussen of the Pew Center on Global Climate Change) but nary a skeptic.

CERA, in fact, has never hosted a debate on climate science in front of an energy audience eager to know. I cannot recall a representative from a free-market think tank (Cato, CEI, IER, etc.) ever addressing the CERA throngs. This does not speak well for Yergin intellectually or as a trusted consultant. Truth bats last in public policy.

Returning to the opening quotation of this post and Obama’s drilling plan: It is possible that Dr. Yergin was quoted out of context. That can happen in interviews where a lot is said and the reporter grabs a sentence to complete the spectrum of views.

But if this is what Yergin meant, then I have another data point of the esteemed energy analyst and author being way too middling and politically correct for my taste.

The real story of Obama’s new offshore drilling has come out from the “Facts & Maps on Obama Administration’s Plan to Lock Up the OCS” released by the House Natural Resources Committee Republican Press Office. Compared to the status quo, Obama’s plan is a clear step back from a pro-resource strategy for oil and gas.

Here are the facts–and illustrative maps in that release.

· Under the President’s Outer Continental Shelf (OCS) plan, over 360 million acres are now under a new “Obama Moratorium” that blocks American energy production.  This represents nearly 60% of the OCS in the Lower 48 States.

· In total, the new Obama OCS plan puts 13.14 billion barrels of oil and 41.49 trillion cubic feet of natural gas under lock and key.

· The plan includes only two actual lease sales – Virginia and Cook Inlet –both are delayed from 2011 to 2012.

· The Administration will only study the other areas (Mid-Atlantic, Southern Atlantic, Chukchi and Beaufort Sea).  It has NOT actually planned lease sales for these areas. There is no guarantee that drilling will ever occur there.

· Drilling in a small portion of the Eastern Gulf of Mexico can only happen if Congress lifts the ban that is in place until 2022.  The Administration has not sent proposed language to make this change to Congress yet.

· The entire Pacific Coast is now off limits. The Pacific Coast alone holds an estimated 10.5 billion barrels of oil—almost 75 percent of the total amount available off the U.S. coastline in former moratoria areas – and 18 trillion cubic feet of natural gas.

· The Eastern Gulf of Mexico mileage restrictions specifically exclude the “Destin Dome” area.  This area contains enough natural gas to supply gas to a million American families for 30 years.  It is located close to infrastructure and could be quickly developed, creating jobs and wealth for the American people.

Slide 1: The old world before the U.S. OCS moratoria was lifted in September 2008 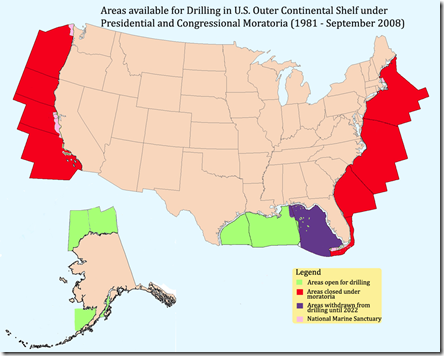 Slide 2: The old world after the U.S. OCS moratoria was lifted in September 2008 (the new status quo pre-Obama plan) 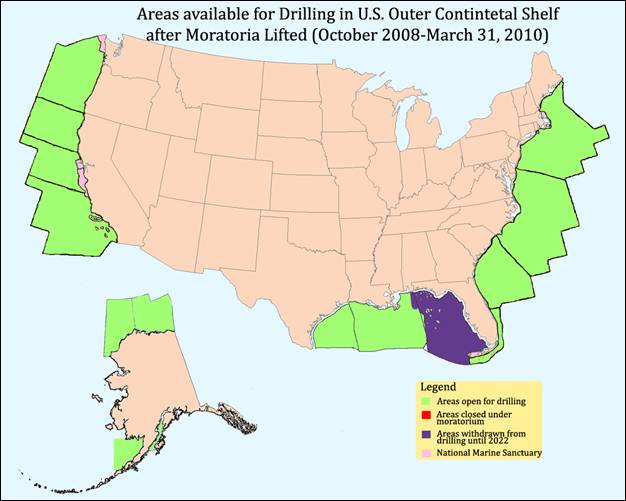 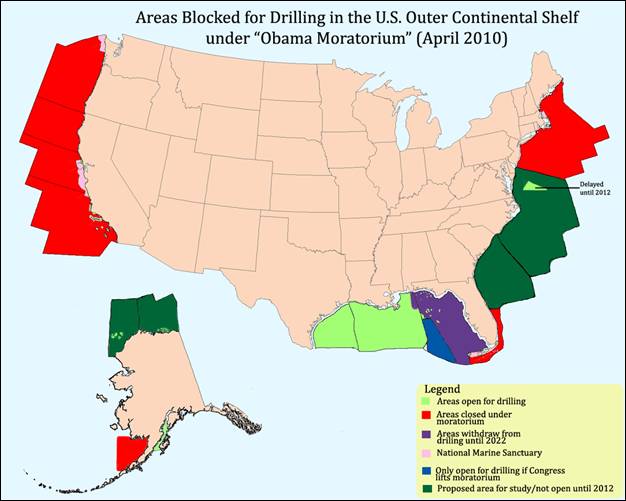 Here is my challenge to Daniel Yergin and IHS/CERA. Please correct the above analysis if it is wrong.

And if it is not wrong, how Dr. Yergin, is Obama’s plan “a sign to the industry that the Obama administration is serious about exploration”?