How Much Will Obama’s Oil-and-Gas Tax Policy Cost Us? We Can Stop Guessing Now

Impacts of Restrictive Government Policies on Oil and Gas Production

Previous estimates of the impact of a Windfall Profits Tax on domestic oil and gas output have varied by assumptions on cost of production, oil prices in the future, and even the presence and size of secondary impacts from oil and gas production. One “clean” estimate (no secondary impacts) published last year gave probable 20-year impacts of a Windfall Profits Tax in the range of $300-800 billion, depending on the price of oil and how much production is reduced, among other assumptions. Another analysis, with greater scope and ambition, estimated the fiscal impacts of restrictions on oil and gas production at more than $1.7 trillion, including the economic impacts on communities.

Now that a “sort of” Windfall Profits Tax is back on the table, in the form of a $31.5 billion (over ten years) tax increase on oil and gas production, it is useful to figure out what the costs and benefits are from different approaches. Fortunately for us the EIA has done most of the heavy lifting. They have produced 20-year production and price forecasts with and without production incentives. Moreover, they have even taken away from us analysts the arbitrary element of price by providing a “consensus” price forecast for both oil and gas.

The EIA forecasts of “trend” (without restrictions) and “low” (with restrictions) oil and gas output shows that by 2015, about the time current investments in production could be expected to start showing results, show that current administration policies will probably lower oil output by some 700,000 b/d (roughly 10%) and gas output by 4%, 2.3 billion ft3/day. Such reductions in output are virtually locked into place given the time required to bring upstream investments to fruition. Indeed, by the end of President Obama’s current term in office, restrictions put in place by this administration will likely reduce future oil output about 1.32 million b/d (15.4%) and gas by 8.9% (4.6 billion ft3/d) annually.

By 2030, restrictive policies, if carried forward, will have the effect of lowering oil production in the US by just over 3 million b/d (~28%) and gas by 30% (15 billion ft3/d). In case you are wondering: The gas-production reduction number is equivalent to about 25 gas liquefaction trains (LNG), and to replace the production would require about 35-40 LNG receiving terminals in the United States. In other words: About twice as much LNG as is currently produced or planned for in Qatar, the world’s largest source of LNG, would be needed to replace the fall in U.S. domestic gas output. And just think what that will do to the price of LNG!

So, How Much Is This Great Future Going To Cost Us?

Just as the EIA has given us a set of production forecasts to work with, so have they given us some price projections. Moving from current price levels, oil is projected to reach $130/bbl in 2030, certainly a modest projection given some of the more histrionic forecasts of the recent past. Gas movements are not as great, since transport costs are more important for natural gas than for oil. The projected year 2030 Henry Hub price is $8.17/mmbtu.

With no changes in federal tax policy for corporate profits (you have to start somewhere), and with royalty rates staying at current levels (but paid in money, not in kind), federal receipts from upstream oil and gas operations should fall by $118 billion by 2019 ($87 billion if the tax increases on oil gas are fully effective). By 2030 the cumulative reduction in federal take from the oil and gas industry will be more than $780 billion under current administration policies. In fact, the loss of federal revenue in 2020 alone will be more than 10% greater than the total expected take from the administration tax increases over its ten year lifetime. By 2030 the annual loss of federal revenue will fall into the range of $70 billion.

This analysis is extremely conservative in its assumptions. Losses to states, probably in the range of $100 billion through 2030, and the beneficial economic effects of job creation and expanding supply chains in the upstream industry have been ignored here (but not in the ICF study). 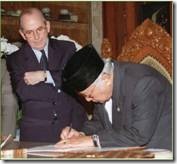 Even in the EIA’s unrestricted forecast, domestic oil production does not quite get to 60% of projected 2030 demand. So the idea that dressing in the barbed wire of production restrictions could be good for us, even if we are broke and running unsustainable trade deficits, seems to run counter to the common sense of reasonable cost oil supplies for domestic markets. For gas, the justification for additional production restrictions is even more absurd; given that gas is certainly the cleanest transition to high tech energy sources of the future. Restricting its availability not only costs money, about $19 billion through 2019, but also puts our energy supply at the mercy of every neighborhood organization in the country that fears an LNG regasification plant in the county. There are only so many such facilities that we can plant on the Baja “energy farm” in Mexico.

At some point our creditors will also pipe up – suggesting gently or not, that we effect an attitude change about extractive industries given our burgeoning national debt, a great deal of it attributable to restrictions on domestic oil and gas production. Perhaps before we get the full IMF (International Monetary Fund) treatment from China and other creditors demanding a loosening of restrictions on oil and gas output (and perhaps suggesting that the creditors’ companies be the ones to undertake those activities), we should think a little more about funding our own nights out in New York.