“Unreliable wind and solar made very little contribution to sustaining the grid…. Oil provided the fuel that saved New England from a grid disaster this past January. On January 6, it supplied 36 percent of the electricity for the New England grid.”

During the coldest days this past January, the New England grid was on the brink of disaster. Only pre-planning by New England Independent System Operator (ISO-NE), emergency actions by the Coast Guard, and luck kept the lights on.

The pre-planning by the New England Independent System Operator consisted of ensuring there were sufficient duel burning, i.e., oil and natural gas power plants, with oil stored on site, available for extended periods when natural gas would not be available for meeting increased demand for electricity.

Homeowners have first call on natural gas and power plants could not be sure of having adequate supplies when cold weather resulted in increased loads. Their natural gas supplies could be interrupted since homeowners came first.

Oil was to provide the fuel needed to keep the grid up and running. But as the cold weather worsened, oil supplies were rapidly depleted, and resupply was necessary. But the waterways were frozen and the Coast Guard was called upon to open them using ice breakers so that refueling vessels could reach the power plants in need of replacement oil.

Bridges were raised during rush hour to allow these vessels to pass so the oil could reach its destination in time.

Luck asserted itself as the weather finally broke, just in time to allow normal operations to resume. Power plants were scraping the bottom of the barrel of their oil supplies.

The following charts from ISO-NE report shows what happened. 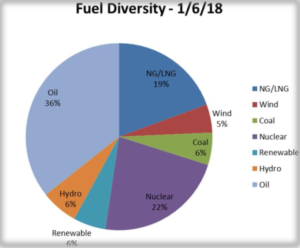 Figure 1. Chart from IS0-NE showing fuel use on January 6, 2018. These conditions prevailed from December 28 through January 9.

Oil provided the fuel that saved New England from a grid disaster this past January. On January 6, it supplied 36 percent of the electricity for the New England grid. 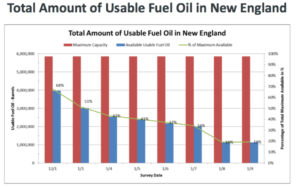 But luck stepped in as fuel oil supplies were being depleted. By January 9, only 19% of total possible supply in New England was remaining.

While the days of remaining supply at a typical power plant, as shown by ISO-NE, was down to about one day on January 9. 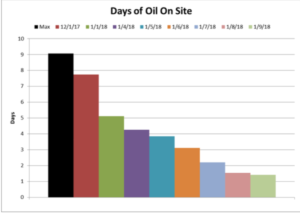 This is a success story. But what about next time?

There are some general conclusions that can be reached from this experience.