“The combination of the federal PTC and state RPS policies has shielded wind developers from the basic supply and demand forces present in a healthy competitive market. As a result, we are fast-tracking the construction of expensive renewable resources that are variable, operating largely off-peak, off-season and located long distances from where the energy is needed.”

As IER’s recent study found, the wind Production Tax Credit (PTC) disproportionately benefits States with renewable energy mandates by distributing the high cost of their policies to taxpayers at large. And the benefit is enormous — at $23/MWh, the PTC’s pre-tax value of $35/MWh equals or exceeds the wholesale price of electricity in many parts of the country.

No traditional source of electric generation receives a federal subsidy as generous and condition-free as the PTC.

Since most of the wind deployed in the US is located in, or adjacent to states with RPS mandates, project owners are also eligible to earn significant out-of-market revenues in the form of renewable energy credits.

The combination of the federal PTC and state RPS policies has shielded wind developers from the basic supply and demand forces present in a healthy competitive market. As a result, we are fast-tracking the construction of expensive renewable resources that are variable, operating largely off-peak, off-season and located long distances from where the energy is needed.

Wind energy proponents appear blind to the economics and justify the subsidies by insisting that adding renewables to the grid reduces the market price of electricity through a mechanism known as “price suppression” where resources with no fuel cost displace more expensive power. But such claims fail to fully consider wind’s behavior relative to electricity need and market rules.

One persistent example of this occurs when wind floods the system with energy well in excess of demand. When there is a surplus of electricity and no opportunity to channel the energy to other load regions, prices will drop and could go negative.

Negative pricing is not the goal of any healthy economy. Rather, negative pricing serves as a practical tool for encouraging generators to voluntarily curtail operation during excess-gen conditions.

Most generators respond to negative prices, and the situation usually resolves itself quickly. However, since wind project owners receive substantial federal and state subsidies outside of the energy market, they can afford to produce at below-market prices. The wind industry has grossly misrepresented the concept of negative prices by insisting that they benefit ratepayers. This is flatly false.

When resources on the grid drive market prices into the negative range, this is an indicator that the power plants are either built in the wrong location (no transmission) or producing at the wrong time (low demand).

Proponents also insist that long-term power purchase agreements (PPAs) benefit ratepayers by protecting them from fuel price volatility.  Not so!

Such claims ignore our historical experience under the Public Utility Regulatory Policies Act (PURPA) which demonstrated decades ago that long-term fixed price contracts at above market prices do not lead to lower costs for ratepayers. In fact, with PPAs in place, it’s wind developers that are shielded entirely from market price fluctuations – fluctuations that they might create — while the full risk is borne by the ratepayer.

Since Purchase agreements are essentially ‘contracts for difference’, the ratepayer ultimately pays the delta between the contract price and the market value. If energy prices are negative, ratepayers could be paying significant prices for wind.

Wind proponents insist, without qualification, that wind is just as dispatchable as more reliable technologies. That is not the experience in California or anywhere in the US.

As the percentage of intermittent resources like wind are added to the fuel mix, grid operators like the California ISO have identified the need to add substantial quantities of new fast-ramp, flexible generators that have the ability to start and stop multiple times per day to address sharp changes in net electricity demand as the sun sets and the winds die down. 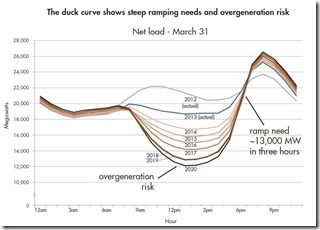 Consider a recent Synapse study which modeled the costs and benefits of doubling the current RPS mandates within PJM by installing wind up to 65,400 megawatts. The models concluded that to address the intermittency of wind, 58,000 MW of less-flexible coal capacity would be retired (76% of what exists today) and 73,000 MW of flexible gas-fired combined cycle added – in other words, adding more gas than the installed wind!

It doesn’t end there. Transmission policy in most of the country is based on a FERC-approved Standard Market Design (“SMD”) which, in part, uses energy market prices to discourage the building of power plants that produce off-peak and are sited long distances from load.

However, generous governmental subsidies are skewing the market such that on-shore wind energy facilities can afford to operate despite time of day, year and locational price penalties. As a result, rather than trying to keep the deployment of transmission to a minimum, renewable energy facilities are fueling the race to build thousands of miles of new transmission capacity where none was needed before. New power lines are now proposed nationwide with costs forecasted well into the tens of billions of dollars.

If the PTC is permitted to expire, REC prices in states with mandates will likely go up until the industry is forced to implement cost-cutting measures and increase efficiencies. RPS states will experience the full price burden of their mandates and respond by examining ways to rein-in costs.

We will also likely see the industry shift their business plans away from those based on tax avoidance to plans based on energy production – as they should be. American taxpayers, ratepayers and the wind industry would be better served.

Still, given the latest amendment to the wind PTC and the commence construction provision, we may not know for another few years how much the PTC “status quo” will continue – even if the tax credit expires. Unlike Section 1603, there is no application process that will determine a project’s eligibility prior to being built. Nor is there an in-service date to gauge development. The IRS will be relying on the audit process to validate PTC eligibility.

According to the IRS, it may not be until 2017 before the agency issues determinations on projects. In other words, after the projects are erected and investors apply for the credit. Unless the law is changed, we may be looking at PTC-related costs for a long time even if the PTC expires this year.