When it comes to climate, are all fossil fuels equal?

“No,” the answer has been until very recently. In terms of how much carbon dioxide (the major force behind the human alteration of the atmospheric greenhouse effect) is produced when burning various fossil fuels to produce a unit amount of energy, there is a definite ranking. From the most CO2 produced to the least, the list goes coal worst, oil next worst, and natural gas least worst.

While it would be stretch to call natural gas the sweetheart of climate-change-fearing environmentalists, many have considered it to be the lesser of the reliable-energy-source evils. Of course, they rally behind the wind and the sun, but even renewable energy idealists understand that there needs to be a bridge between where we are now and where they would like us to be—and that bridge is envisioned to be constructed primarily from natural gas (a foundation furthered by the nuclear problems in Japan).

But a new study out of Cornell University makes the natural gas bridge out to be another Gallopin’ Gertie rather than a secure pathway to the future—at least when it comes to being a climate-change mitigator/savior.

The Climate Impact of Natural Gas

So, on the face of things, numbers like these are what make natural gas the darling of climate change mitigators. They see that a switch from coal to natural gas could cut global-warming CO2 emissions by more than 40%. This number falls quite a bit short of the long term goals of reducing greenhouse gas emissions by more than 80%, but nevertheless it is a big step in the right direction. Thus, natural gas is viewed as a “bridge” to a largely carbon-free energy production—that is, it is a construct which buys time for other technologies to mature and/or be developed.

One of the biggest drawbacks with using natural gas as a bridge fuel are doubts as to whether or not there exist ample supplies of natural gas to adequately serve the world’s growing power needs, while waiting for carbon-free energy technologies to become viable. It had seemed that the gas was in relatively short supply—that is, everywhere except in Russia—a situation much to the chagrin of Western Europe (and its attempts to reduce CO2 emissions as obligated under the Kyoto Protocol).

But all that changed in the last couple of years with the development of a method of hydraulic fracturing (“fracking”) of deep shale beds to release huge amounts of methane stored in the geologic formations. The fracking processes involves drilling deep vertical wells to reach the natural gas-rich shale beds, and then extending the wells horizontally through the layer of shale. A flow of water (mixed with a proprietary cocktail of other chemicals) is forced into the shale bed under very high pressure which fractures the shale thereby releasing natural gas which can then be collected through the well.

Fracking has the potential to open up huge domestic gas supplies and produce jobs. It has already done so in parts of Wyoming, Louisiana, Texas, and most notably, Pennsylvania where it has been estimated that the Marcellus Shale formation which underlies a large portion of the western half of the state can produce enough natural gas to supply the U.S. needs for two decades.

But, despite its potential to supply large amounts of low-CO2 producing energy, the enthusiasm for the rapid deployment of fracking technologies is not universally shared.

If you own the mineral rights over prime shale beds then you are ecstatic, because the potential cash flow is large. If you live atop (or near) those same shale beds and don’t own the mineral rights, then you probably fear any potential contamination of the water (both ground water and surface water) and increased heavy equipment traffic on previously quiet country roads (or course your outlook may change is you are a purveyor of goods and services that the gas miners may require such as hotel rooms, apartments, restaurants, bars, etc.).

And if you are like most of the rest of us—far removed from the local impacts (be they negative or positive), you are probably quite happy to have a new fuel source that is relatively inexpensive, apparently in high supply, non-radioactive, and produced in the good old U. S. of A. Throw in mitigating climate change, and it seems like you have the perfect fuel (less some local nuisances).

But now comes word that perhaps natural gas from fracking isn’t as good for the climate as has been postulated—and thus its inherent advantage over coal and oil isn’t as great as advertised.

A new analysis that tracks the global warming potential of hydraulic fracturing has just been published by a group of researchers at Cornell University led by Dr. Robert Howarth and has this unexpected result:

“Compared to coal, the [greenhouse gas] footprint of shale gas is at least 20% greater and perhaps more than twice as great on the 20-year horizon and is comparable when compared over 100 years.”

Better read that again—the warming influence on the earth’s climate from shale gas is “perhaps more than twice as great” as that from coal, at least on the timescale of decades. And even after a century, the impacts may be equivalent.

If this result holds up, gone would be the inherent advantage of shale gas over coal. After all, coal is also a fuel source that is relatively inexpensive, apparently in high supply, non-radioactive, and produced in the good old U. S. of A.

But how can the Howarth et al. finding be true if burning natural gas produces only about half the carbon dioxide as does burning coal? Well, it seems the early stages of fracking operations releases a lot of methane—the primary constituent of natural gas and a greenhouse gas that is a more powerful warmer than is CO2.

On an equal mass basis, the “global warming potential” of methane has been calculated to be about 100 times that of carbon dioxide over a 20-year period, and about 33 times that of CO2 on a 100-yr period. The difference comes in because the atmospheric lifetime of methane is much shorter than that of CO2 as there are active scrubbing agents (primarily the hydroxyl radical (OH)) that act to break down methane in the atmosphere, and so an equal amount of methane stays in the atmosphere for a much shorter period of time than does carbon dioxide. But while it is there, methane is very good at trapping outgoing long-wave radiation that would otherwise escape directly to space.

According to Howarth et al., whose calculations are based on admittedly few available observations, a fairly high percentage (3.6% to 7.9%) of the total natural gas that is recovered from a fracking well is lost to the atmosphere. This “fugitive” methane escapes from the well during the initial stages of setting the well, fracturing the shale and removing the water/chemical mixture from the well. 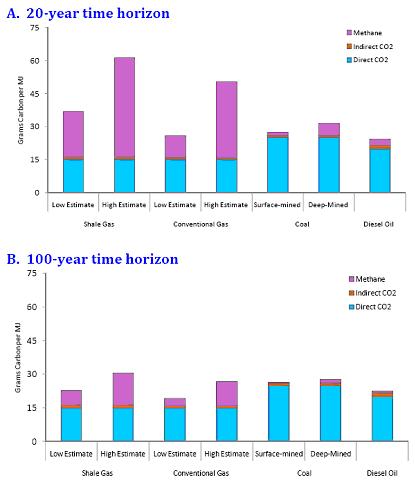 Surely the Howarth et al. study is not the final word on this. And in fact, right out of the gate is has been met with a lot of resistance. Complaints have surfaced, among others, as to the true global warming potential of methane (Howarth et al. use values that are somewhat larger than reported by the IPCC), the reliability of the little actual data from fracking operations on which the conclusions were based, and whether the “fugitive” methane from the drilling operations actually escapes directly to the atmosphere or whether it is flared at the site (this turns out to make a big difference because if the methane is flared (i.e. burned), CO2 is released to the atmosphere rather than methane).

And, on top of this, since fugitive methane is lost profit, there should be financial incentives to keep it to a minimum (and improvements are anticipated as the fracking methodology matures). And if the market is deemed unsuccessful at reducing the direct methane loss, then in theory regulations could be applied.

At the very least, the Howarth et al. study is swaying the natural gas climate bridge a la Gallopin’ Gertie. Whether or not it suffers the same fate as Gertie and crumbles into the abyss only to be rebuilt with a different foundation and design, or whether it manages to stabilize itself and serve as a major pathway to a low(er) carbon future remains to be seen.

In any case, the Howarth et al. study should act to slow the civil war within the fossil fuel family (between natural gas and coal in electricity; natural gas and oil in transportation) while a more thorough examination of the potential climate impact of the full life-cycle of fossil fuels and their production methods are undertaken.

The climate playing field for fossil fuels is possibly a lot more level than it is generally considered to be.