“Rhode Island Department of Health, the Department of Environmental Management (DEM) director Janet Coit met with and expressed sympathy for the pipeline protestors’ cause. Remember, this is the state that will be hosting the first offshore wind energy project that will have the highest cost electricity in the continental United States at 24.4 cents per kilowatt-hour.”

“The governors of the states seem to have awakened to the economic benefits of utilizing more clean-burning, low-cost natural gas. Let’s hope they don’t cave into the politically expedience of bowing to more high-cost renewable energy.”

New England’s just-ended abnormally cold winter sent electricity and heating demand skyward, bringing into focus the battle over expanding natural gas pipeline capacity to the region. While there are two significant proposed pipeline expansions seeking FERC approval, environmentalists have become more militant. This, after all, is a war against upstream hydraulic fracturing and pipelines in general.

The New England governors are backing these pipeline expansion projects with the hope that by having more natural gas flowing into the region utilities will be able to restrain increases in electric power costs that have become a significant burden on local residents and businesses.  New England has some of the most expensive electricity costs in the nation, which is cited as a partial explanation for the weak economic performance of these states in recent years, and especially in their effort to fully recover from the 2008/9 financial crisis-induced recession.

One of the pipeline expansion projects is the Northeast Energy Direct Project sponsored by Tennessee Gas Pipeline, a company owned by mid-stream energy powerhouse, Kinder Morgan (KMI-NYSE).  This project would bring additional gas from the Marcellus producing region in Western Pennsylvania into the markets of New Hampshire, Massachusetts and Connecticut.  This project is conducting its open season solicitation to determine the volume of gas demanded and whether producers will commit to ship their gas on the line.

The more advanced pipeline expansion project is that of Spectra Energy’s (SE-NYSE) Algonquin Gas Transmission subsidiary, which has proposed expanding its pipeline’s capacity into the Boston metropolitan area primarily by increasing the pumping capacity at several of its existing compressor stations. One of those stations is located in Burrillville, Rhode Island.

In the past year it has become the symbolic target of emotional protests against the gas pipeline expansion project following 60 years of operation without any incidents or complaints from local residents. Now, however, based on the protests, one would think it is the noisiest and dirtiest compressor station in the nation.

The Burrillville compressor station expansion proposal has sparked numerous protests, beginning last fall when an environmental organizer arrived in the community, that increasingly have turned ugly. Ironically, the same day that the Federal Energy Regulatory Commission (FERC) gave its approval to the project, was the start of the most recent protest, which involved a three-day march from the Boston area to Providence and was organized by the activist group Stop the West Roxbury [Massachusetts] Lateral Pipeline and joined by members of Fight Against Natural Gas (FANG) and Burrillville Against Spectra Energy (BASE).

According to the protest leaders, FERC’s approval was predetermined, but the project still needs additional permits, including at least two from Rhode Island agencies, thus explaining why the protesters came to the state.  The goal of the protest movement is to hopefully derail the Algonquin project, but it is truly hoped that the movement will stop four other pipeline projects proposed for New England.  As part of its protest efforts, on February 28th, FANG interrupted a speech by Senator Sheldon Whitehouse (D-RI) at the Yale Law School in New Haven, Connecticut.

The group also staged protests in Sen. Whitehouse’s office in Providence and Senator Jack Reed’s (D-RI) office in Cranston.  The interesting thing is that Sen. Whitehouse is the Senate’s leading climate change promoter and he has been making almost weekly speeches on the subject on the floor of the Senate.  Senator Reed, a Northeast liberal, is also a leading environmental promoter.  Arrests were made in ending each of these protests.

The most recent protest march finished in the Rhode Island capitol and the office of Governor Gina Raimondo (D). The activists also rallied in the offices of the Rhode Island Department of Health, the Department of Environmental Management (DEM) and Senator Whitehouse.  While neither Gov. Raimondo nor any of her staff would meet with the activists after they entered the outer chamber of her office, the group did hold a brief protest there.

DEM director Janet Coit sat down with the group, and according to the activists, expressed sympathy for their cause. Remember, this is the state that will be hosting the first offshore wind energy project that will have the highest cost electricity in the continental United States at 24.4 cents per kilowatt-hour (See Exhibit 1) with an annual increase guaranteed, or nearly twice the average cost for the nation and nearly as expensive as power in Guam.

It is important to understand the dramatic shift in power supplies in New England to understand both the opportunity for pipeline companies to expand their delivery capacity and the need for these additional supplies of low-cost natural gas to help hold down electricity cost increases in the region.  A table (Exhibit 2) published by EnerKnol shows how New England’s power supply has changed over the past 15 years, with natural gas’ share now nearly three times what it was in 2000.  Importantly, with the closure of the Vermont Yankee nuclear power plant at year-end 2014, nuclear’s share of the power market will decline. 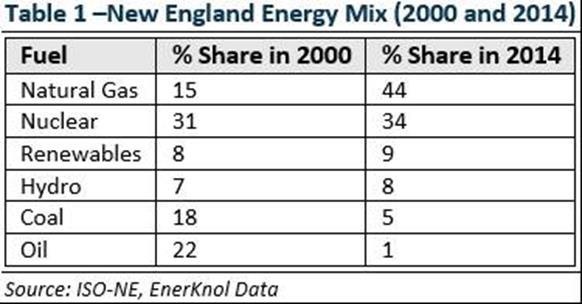 Surprisingly, for all the push by environmental groups and politicians, the market share of renewables has barely increased over this time period.  The clear message from the table is that natural gas has displaced coal and oil, meaning that pollution has been reduced in the region.  The big problem for the region is that without additional gas transportation capacity, when seasonal demand surges, power companies need to restart oil- and coal-fired plants, which tend to be more expensive and dirtier.

One thing we have observed about the region is that its consumption of natural gas has continued to grow as homeowners switch from fuel oil to gas for home heating and new power plants favor using gas over other fossil fuels.  So far this winter, gas demand has surged to a new high of 43.1 billion cubic feet on February 16th, a 3% increase compared to the highest level of demand experienced during last winter’s polar vortex.  It will be interesting to see not only what peak demand ends up being (it may have exceeded that February peak in the most recent cold snap) but also what the average winter demand is this year.  The chart in Exhibit 3 shows the trend in gas consumption for the prior nine years. 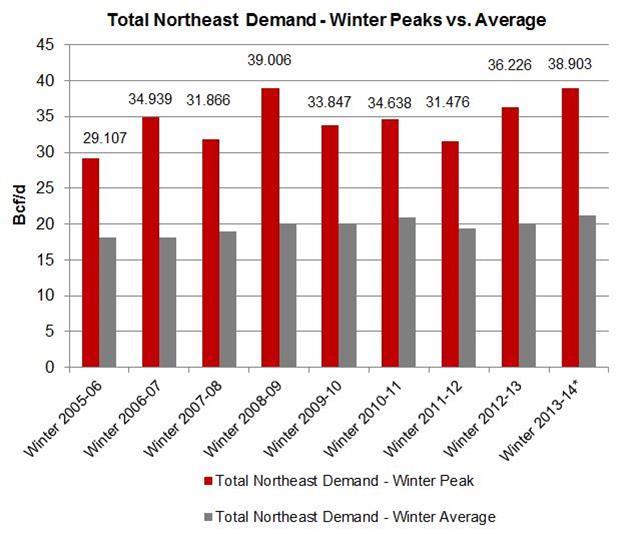 The impact of the pipeline capacity shortage in the face of growing demand in the region is demonstrated by the cost of day-ahead prices for natural gas.  While the data in the chart in Exhibit 4 (Source: FERC) below reflected mid-January pricing, the key point is that the Algonquin city gate and Transco Zone 6 pricing, which are reflective of natural gas prices in the New England consuming market, is considerably higher than the prices reflected in the Marcellus (Columbia Appalachia) and national (Henry Hub) markets.  The ability to bring more gas into the region should allow utilities to enter into more long-term gas supply contracts and reduce city gate prices.  It is unlikely that these price disparities will completely close, but they will certainly narrow. 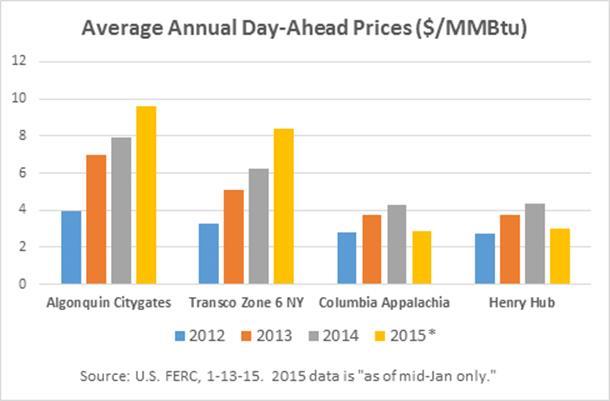 More natural gas pipeline capacity in the New England region should lower home heating and electricity bills for residents.  That should be a positive for economic growth in the region.  These pipeline expansions will only come over the opposition of anti-gas protestors and green-energy proponents. The governors of the states seem to have awakened to the economic benefits of utilizing more clean-burning, low-cost natural gas. Let’s hope they don’t cave into the politically expedience of bowing to more high-cost renewable energy.