“Economists have long argued that these [national security] claims are based on economic misunderstandings, yet they are still cited as political justifications for military deployment of U.S. forces in the Middle East. These policies along with past military interventions are at the root of international terrorism directed at the United States.”

Military generals are charged with managing national security, which has included ensuring access to “needed” natural resources. U.S. military goals have been further stretched to securing access to resources “needed” for economic security.

The first U.S. overseas seizure concerned bird guano, a fertilizer like no other at the time. If Peru insisted on getting a lot of money for this valuable product, the only solution was invasion. The U.S. Congress, in response to public opinion, passed the Guano Islands Act of 1856, which authorized Americans to take any guano deposits they discovered.

Over the next half-century, U.S. merchants used the law to claim 94 islands, cays, coral heads, and atolls. The long, strong arm of the U.S. government joined with business interests to create a crony foreign policy.

Economists have long argued that these claims are based on economic misunderstandings, yet they are still cited as political justifications for military deployment of U.S. forces in the Middle East. These policies along with past military interventions are at the root of international terrorism directed at the United States.

What resources are “needed” for national security can be hard to identify. Oil and uranium to power U.S. ships, tanks, and jets, along with rare earth minerals needed for military uses seem good examples.

But there is now plenty of oil produced and refined in the U.S., and plenty of uranium stockpiled and available worldwide. Rare earth minerals are available in the U.S., though major mines have been closed due in part to environmental regulations.

Claims of overseas natural resources like oil being “needed” for economic security are even harder to defend as U.S. oil and gas production have surged over the last five years. This November 2012 NPR segment on oil and U.S. Middle East policy gives a nice overview of the issues. (The claim at the end from the head of the Sierra Club is confused; environmental groups continue to argue for more government subsidies of wind and solar power.)

Oil from Canada, the U.S., and other Western Hemisphere locations plus new offshore fields in West Africa, continue to reduce “dependence” on Middle East oil, and therefore further undermine the case for deployment of military resources to defend Mideast oil production and sea lanes.

I put quotation marks around “dependence” and “need” because economists further argue that the U.S. never “needed” oil from the Middle East nor was the U.S. “dependent” on Mideast oil imports. Instead, it would be more accurate to argue Saudi Arabia and other Mideast countries are dependent on cash from oil exports to purchase food, clothing, housing, and to fund the opulent lifestyles of their ruling elites.

The U.S. has always been able to ramp up alternate supplies of oil and gas, as well as stockpile supplies and develop oil fields elsewhere around the world.

Supply disruptions of Mideast oil would cause turmoil, much as hurricane Katrina did when it slammed the Mississippi and Louisiana coast and knocked out major oil production and refineries. Oil and gas prices rose dramatically, and U.S. consumers and industry, guided by high prices and profit opportunities, quickly and adroitly adapted to reduce use in the short term, and then bring in oil and gas from nearby locations.

The U.S. has such a powerful and dynamic economy that even before the shale oil revolution of the last five years, there was limited economic or strategic justification for deploying military forces to the Middle East. (This is a debatable claim of course, but one that economists have rigorously researched and documented. This 2007 Independent Institute study (pdf) by economist David Henderson of the Naval Postgraduate School makes the case for markets rather than military forces, as does this 2013 post on the 10th anniversary of the U.S. invasion of Iraq. ) 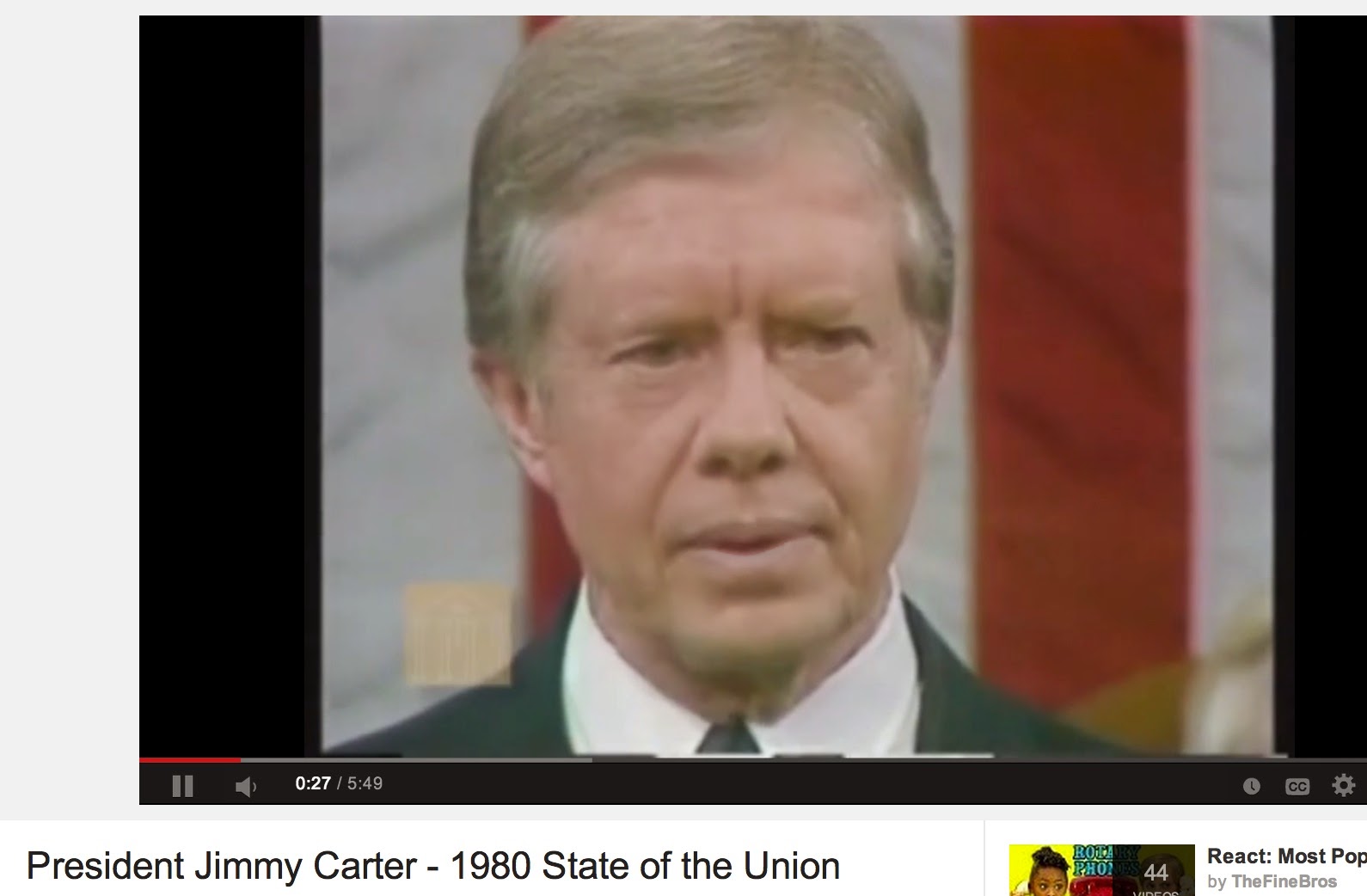 An attempt by any outside force to gain control of the Persian Gulf region will be regarded as an assault on the vital interests of the United States of America, and such an assault will be repelled by any means necessary, including military force.

There is much mixed-up economics in this State of the Union Address (though that’s not unusual for such speeches). The address begins by deploring “terrorism and anarchy” in the Middle East:

At this time in Iran, 50 Americans are still held captive, innocent victims of terrorism and anarchy. Also at this moment, massive Soviet troops are attempting to subjugate the fiercely independent and deeply religious people of Afghanistan. These two acts—one of international terrorism and one of military aggression—present a serious challenge to the United States of America and indeed to all the nations of the world. Together, we will meet these threats to peace.

For students considering topics on changing Middle East policy and international terrorism policy, it is interesting to see both policies front and center in 1980, some 34 years ago.

Justifying U.S. military intervention in the Middle East, according to President Carter was the: “overwhelming dependence of the Western democracies on oil supplies from the Middle East…” 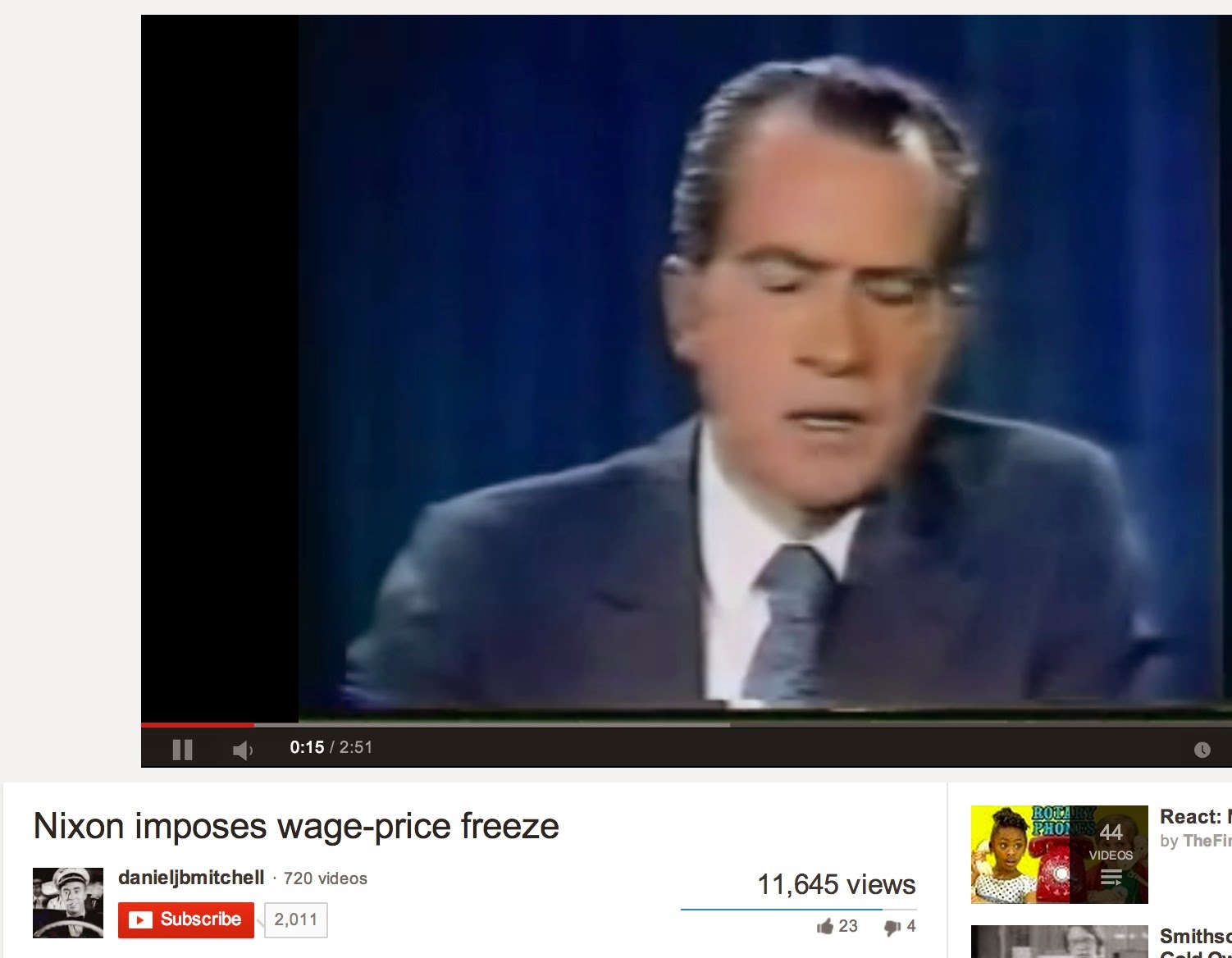 How did this happen? How did the U.S. become so “dependent” on oil from the Middle East? A significant cause was wage and price controls declared by President Nixon in 1971, and kept in place for domestic oil prices through the decade. Here is the story from The Commanding Heights:

Only one segment of the wage-and-price control system was not abolished — price controls over oil and natural gas. Owing in part to the deep and dark suspicions about conspiracy and monopoly in the energy sector, they were maintained for another several years. But Washington’s effort to run the energy market was a lasting lesson in the perversities that can ensue when government takes over the marketplace. … The oil-price-control system established several tiers of oil prices. The prices for domestic production were also held down, in effect forcing domestic producers to subsidize imported oil and providing additional incentives to import oil into the United States. The whole enterprise was an elaborate and confusing system of price controls, entitlements, and allocations. [Source.]

There is much more to the story, which involves loose monetary policy, the IMF, and leaving the gold standard. When President Nixon took the U.S. the rest of the way off the gold standard (by closing the “gold window”), the Federal Reserve was able to expand money creation to cover increasing government deficits funding the war in Vietnam as well as expanded welfare state spending and new environmental programs.

Creating money faster than the expansion of goods and services causes inflation. Prices were rising and rather than fix monetary policy or reduce spending, Nixon tried a dramatic intervention to freeze all wages and prices. Inflation continued to push nominal costs up across the economy, including for oil exploration, drilling, transportation, processing and retailing. But the prices oil companies could charge was first frozen and then tightly regulated. Oil companies responded by reducing exploration and slowing production when their costs were higher than the prices they were allowed to charge. So more oil was imported from the Middle East to make up the difference.

Looking back a bit further, students can look at the last decades of colonial policies in the Twentieth Century, and the Japanese efforts after World War I to develop its own empire and push colonial powers out of Asia.

When the Roosevelt Administration blocked oil exports from the Philippines (then a U.S. territory) to Japan, Japan responded by bombing Pearl Harbor. The U.S. oil embargo was a response to Japan’s military expansion into Indochina which threatened rubber and other raw material exports to the (soon to be) allies in Europe.

Japan’s aggression in China, military alliance with Hitler, and proclamation of a “Greater East Asian Co-Prosperity Sphere” that included resource-rich Southeast Asia were major milestones along the road to war, but the proximate cause was Japan’s occupation of southern French Indochina in July 1941, which placed Japanese forces in a position to grab Malaya, Singapore, and the Dutch East Indies. Japan’s threatened conquest of Southeast Asia, which in turn would threaten Great Britain’s ability to resist Nazi aggression in Europe, prompted the administration of Franklin D. Roosevelt to sanction Japan by imposing an embargo on U.S. oil exports upon which the Japanese economy was critically dependent. Yet the embargo, far from deterring further Japanese aggression, prompted a Tokyo decision to invade Southeast Asia. [Source.] 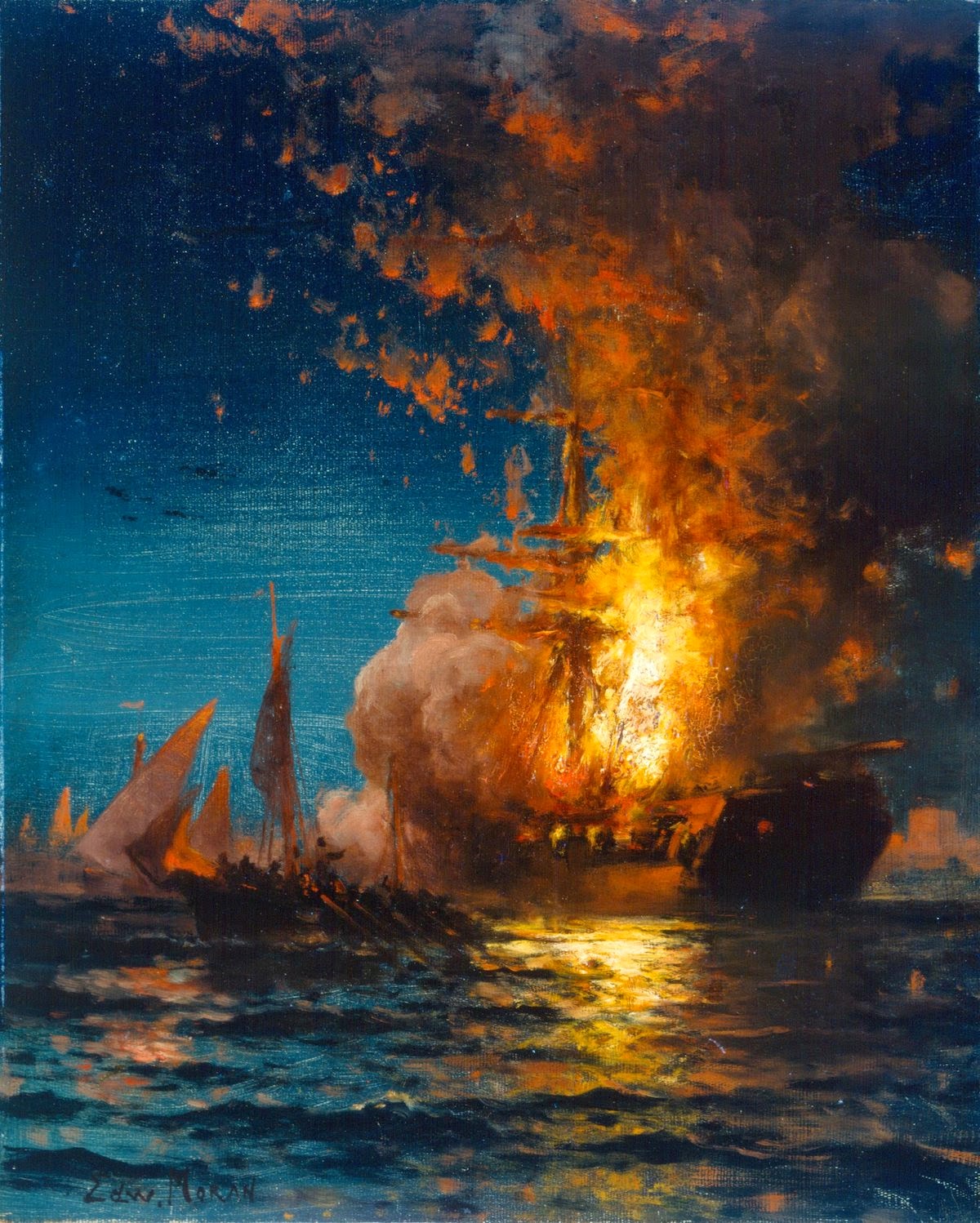 And… stepping back still further we can review the United States first military involvement in North Africa as President Jefferson refused to continue making payments to the Barbary Pirates and sent the U.S. Navy over instead. That turned out to be an explosive project, as have so many U.S. interventions in the Middle East.

Mr Rehmke has directed similar programs at the Center for the American Idea, The Reason Foundation, and the Foundation for Economic Education. Since the 1980s, Mr. Rehmke has published annual study guides and held workshops on the economics of annual high school debate topics.