“The opportunity is for the next president to get the military focused on national defense, not climate alarmism and forced energy transformation.”

A nation that uses more than 20 percent of the oil that is produced globally every single year, that sits on (at best estimates) 3 percent of the known reserves, cannot drill its way out of the situation of energy insecurity that we’re in.

This quotation demonstrates shortsightedness and narrowness of thinking, similar to the Malthusian thought that has been disproved countless times. Today, the United States has the potential to become self-sufficient in oil, or, if not sufficient alone, then in conjunction with its strategic partner Canada.

McGinn also said: “At home, military bases that are self-sustaining are cheaper and more secure than those dependent on, say, natural gas pipelines or the local utility.” Wrong again, because the United States has also become self-sufficient in natural gas, with at least a 100-year supply. Natural gas is also the cheapest method for generating electricity … bar none.

Yesterday’s fallacies with oil have given way to politicizing national defense in the name of climate change. Executive Order 13514, issued by the President in 2009, established marching orders for the Department of Defense (DOD) to embrace alternative energy, with an emphasis on cutting CO2 emissions. The stated goal of EO 13514 (as reported at FedCenter.gov) was “to establish an integrated strategy towards sustainability in the Federal Government and to make reduction of greenhouse gas emissions [GHG] a priority for Federal agencies.” (Emphasis added throughout)

In August 2010, DOD issued a Strategic Sustainability Performance Plan (SSPP) that was intended to comply with Executive Order 13514. Since then, the military has instituted many efforts to develop alternatives to fossil fuels and has spent hundreds of millions of dollars that should have been spent on weapons and on salaries for our service-men and women.

There is also the myth that renewable liquid fuels can be sourced around the world, when it has been proven that it is virtually impossible to produce biofuels that cost less than fossil fuels domestically … and there is zero proof that biofuels can be produced worldwide in required volumes and at a lower cost than gasoline, fuel oil, or jet fuel.

Every organization should reduce its costs with sound investments, but insulating buildings at a cost that can’t be recovered within a few years is wasteful and diverts funds from important needs. Yet this is one of the activities lauded in a Pew report From the Barracks to the Battlefield, Clean Energy Innovation and America’s Armed Forces.

And here is what the Left thinks about the military, as quoted from IntelligentUtility in its article, National security depends on EE & RE, not drilling.

Politicians and the military have colluded for generations to hype threats, keep the military budget bloated beyond reason, sell unneeded, dysfunctional technologies to the American public and maintain a mutually lucrative revolving door between the two sectors that perpetuates these practices.

This insults every American who has served in the military, including executives in America’s most progressive and efficient companies who provide the materiel needed to fight and win wars.

Executive Order 13514 was replaced with Executive Order 13693 in March 2015. As reported in FedCenter.gov: “The goal of EO 13693 is to maintain Federal leadership in sustainability and greenhouse gas emission reductions.”

All of this has been brought to the forefront again with “a new directive ordering the establishment of a new layer of bureaucracy — a wide array of ‘climate change boards, councils and working groups’ to infuse climate change into programs, plans and policies.”

And, climate change must be integrated into:

Thus, we have the Great Green Fleet, Biofuels, and other wasteful efforts (see my Green Fleet Nonsense).

There now is a track record of how the administration is putting Americans at risk so as to perpetuate its climate change narrative. This is a most unwelcome distraction. The opportunity is for the next president to get the military focused on national defense, not climate alarmism and forced energy transformation.

Nothing to Fear is available from Amazon and some independent book sellers. 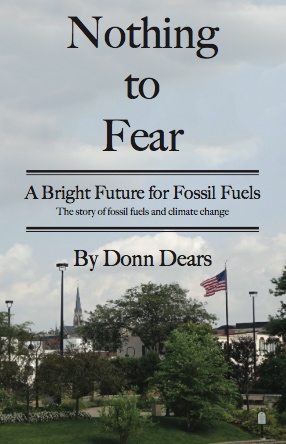