“If he is elected president, Andrés Manuel López Obrador should not just tolerate but champion Mexico’s energy reforms. Confidence will lead to greater foreign investment into oil, increasing the capital stock of the host country to result in higher oil production.”

The front-runner for the Mexican 2018 election (scheduled for July 1) is Andrés Manuel López Obrador (AMLO for short). The former mayor of Mexico City has been runner-up in the past two presidential elections.

Due to his leftist and populist leanings, AMLO’s political opponents have claimed he will be the Mexican Hugo Chavez. Although he claimed in 2016 that he would seek to cancel contracts signed under the Mexican energy reform of 2013–2014, his position now seems to have calmed to where an authoritarian cancellation is very unlikely.

The Mexican energy reforms of 2013-14, associated with the current president’s “Pact for Mexico,” allows foreign companies greater participation in Mexican oilfields. Since Mexican nationalization in 1938, only service contracts were allowed with foreign companies, and state-controlled PEMEX had the monopoly over all oil resources.

Post-reform, companies can now book reserves from leases signed with Mexico through production sharing contracts, and the government is taking a step back from active management in mineral resources.

While the first auction of leases had disappointing results due to depressed oil prices and poorly written contracts, Mexico has now succeeded in auctioning off multiple blocks to successful foreign oil companies such as Total and ExxonMobil.

Fears of a new presidency breaking these leases have been mollified in recent weeks. AMLO’s would-be nomination for finance minister, Carlos Urzua, stated that the oil and gas auctions associated with the economic reforms were done in a transparent manner and “will be completely respected.”

If AMLO needs greater assurance that this is the right decision, he needs to only study the recent history of Venezuela.

Venezuela’s 1990s Apertura Petrolera (“Oil Opening”), according to Raúl Gallegos in his 2016 book, Crude Nation, was launched “to attract the money and know-how the sector desperately needed” (p. 81). Apertura Petrolera offered low tax terms and operational authority of oilfields to foreign companies for the first time since nationalization in the 1970s.

Venezuelan oil production grew rapidly in the 1990s, but a banking crisis at mid-decade and oil prices in the late 90s led to economic troubles for the country–and eventually to the election of Hugo Chavez, a fiery politician who capitalized on the discontent.

Chavez and his followers didn’t like the idea that foreign companies were making revenue from Venezuelan resources, so he changed contract conditions and increased state control of the national oil company PDVSA. Oil reserves became directly controlled by the state with no accountability or transparency.

Chavez sought to raise revenues through cartelization with OPEC rather than through increasing production output. The first few years of the Chavez government were characterized by disagreements between PDVSA officials and the state, and the conflict reached a climax in the oil strike of 2002-03.

The state company lost 18,000 of its employees by the end of the clash, and the diaspora of technical experience worsened when foreign companies were chased out with new state-centered policies. Venezuelan oil production levels have never recovered to what they were before the oil workers’ strike, and production continues to decline under President Maduro. 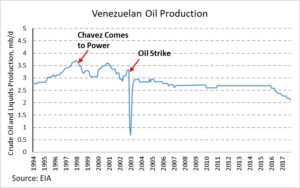 If he is elected president, Andrés Manuel López Obrador should not just tolerate but champion Mexico’s energy reforms. Confidence will lead to greater foreign investment into oil, increasing the capital stock of the host country to result in higher oil production.

Countries grow wealthy by allowing business to work and invest, not by seizing control over specific industries. As Robert Bradley and Richard Fulmer note in Energy: The Master Resource (p. 128):

What wealthy nations have in common is liberty – the right of individuals to act as they choose without interference, so long as they don’t interfere with the rights of others to do the same.

And a deregulatory dynamic could lead to a new generation of reforms, even toward private ownership of the subsoil, a policy urged by Guillermo Yeatts for the democratization of wealth and improved incentives.