“Despite his folky style and positioning to the contrary, [Kevin] Martis is a highly polished, fossil fuel operative with aggressive tactics. The taxpayers of Seneca County and all of Ohio deserve a more honest broker than Kevon Martis.”

Citizen Martis is very well respected here at MasterResource, as evidenced by these posts:

And recall his 2013 post “Dear Michigan: Why Wind?” where he quoted James Hansen: “Suggesting that renewables will let us phase rapidly off fossil fuels in the United States, China, India, or the world as a whole is almost the equivalent of believing in the Easter Bunny and Tooth Fairy.”

And also recall his post on Proposition 4 in Michigan, which voters defeated handily back in 2012.

Here is Peterson’s article regarding Martis (in bold):

Since January, we’ve been looking into who is blocking the growth of wind energy in Ohio. We’ve documented how powerful House Majority Leader Bill Seitz works for energy lobbyists in the state capital of Columbus to block the growth of wind energy, a job-creating clean energy solution embraced by neighboring states. At the county level, local gadfly Chris Aichholz is the point-man in Seneca County who pressures commissioners with anti-wind propaganda from the fossil fuel lobby.

Then, there’s Kevon Martis, who rolled into the village of Attica, Ohio, on May 31, 2018, after visits to North Dakota, Missouri, Indiana and Illinois. Martis is a senior policy advisor at the front group Energy & Environment Legal Institute (E&E Legal), which is based in Washington, DC. He is also founder of a Michigan-based, Koch-connected anti-wind group. Martis travels with a propaganda slide show about the supposedly terrible side-effects of wind energy.

“Mr. Martis spends a lot of time doing this and is one of the finest speakers on wind turbine projects. This stuff is all great information and is all backed up.”

Kevon Martis positions himself as a volunteer who travels the country educating local communities. He claims he is “agnostic” about whether or not CO2 pollution from oil, natural gas and coal is killing the planet. Yet he publishes frequently on the website, Master Resource, a “free market” forum that lists “Principals” who have spent their careers in the oil and utility industries or at Libertarian think tanks and anti-wind groups. And at E&E Legal, he’s part of an organization with a notorious history of anti-climate science denial.

During his presentation in Attica, Martis declared, “I am not paid by the fossil fuel companies to fight wind,” but admitted that his expenses are covered…..

Martis’s predecessor in the fight against wind energy, John Droz, (now a Principal at Master Resources) worked with North Carolina state legislators on a law that prevented the state from defining rates of sea-level rise for four years. This occurred after a report recommended the state plan for up to 39 inches of sea level rise by 2100….

No Mention of Pipelines

In his presentation, Kevon Martis talked up the virtue of nuclear power and declared to the citizens gathered in Attica to hear him:

“Did you know that every gas, coal and nuclear powerplant in the State of Ohio would fit inside just ONE Ohio township?” 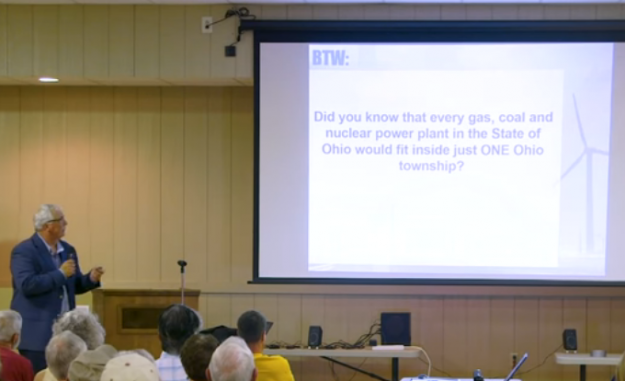 In a June 5, 2018, email to Rep. Bill Seitz, Sam Randazzo and Julie Johnson, Martis comments on a letter from Rep. Bill Reinecke to a constituent that is generally pro-wind energy development.

“As I always say, the only Republicans who support wind energy development are either too lazy, too dim or too corrupt to perform a proper cost/benefit analysis.”

In the attachment, Martis writes:

“There can be no middle ground. You give Big Wind the easement and they build or you don’t and they leave.”

Despite his folky style and positioning to the contrary, Martis is a highly polished, fossil fuel operative with aggressive tactics. The taxpayers of Seneca County and all of Ohio deserve a more honest broker than Kevon Martis.