[Editor note: Pierre Desrochers, who guest posts with us for the first time, is Associate Professor of Geography at the University of Toronto.]

Paul Ehrlich’s best-seller The Population Bomb  turned 40 last year. The latest issue of the peer-reviewed (and somewhat iconoclastic) Electronic Journal of Sustainable Development is devoted to the book, its impact, and the validity of its main message. It features contributions by both Paul and Anne Ehrlich, who mostly stand by their original analysis, and some of their critics who challenge their basic premise and supportive evidence.

Despite a now widespread popular perception that The Population Bomb was a pioneering work, it originally drew little attention. In fact, it was just the latest in a long line of books, reports, essays and pamphlets on the population issue published in post-World War II America.

Ehrlich’s success, it turns out, owed more to his alarmist rhetoric and a lucky break on Johnny Carson’s “The Tonight Show “ (on which he would eventually appear several times) than to any original insight or idea.

The real roots of what is sometimes referred to as modern “neo- Malthusian ecology” in the United States long predates the Stanford’s biologist contribution. It can be ultimately traced back, at least in terms of reaching a large popular audience, including a young Paul Ehrlich himself, to two now largely forgotten best-sellers published in 1948: Fairfield Osborn’s Our Plundered Planet and William Vogt’s Road to Survival.

Following important promotional efforts that included selections in popular book clubs, Our Plundered Planet had already been reprinted eight times by the end of the year in which it was published and was eventually translated into thirteen languages. For its part, Vogt’s book was translated into nine languages, while a condensed version (eventually translated into eleven languages) was published in Readers’ Digest. According to one estimate, it eventually reached between twenty and thirty million individuals and was the biggest environmental best-seller of all time until the publication of Rachel Carson’s Silent Spring in 1962.

William Vogt’s best-seller, Road to Survival, in turn, profoundly trouble and inspired the businessman Hugh Everett Moore to write and publish in 1954 a twenty-two page pamphlet, “The Population Bomb!” (Moore would later give Ehrlich permission to use his original title.) So influential was Vogt, Moore and other overpopulation activists’ crusade that the issue even graced the cover of Time magazine in 1960. 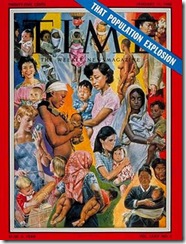 The Malthusian scares of recent decades (mineral depletion, pollution, climate change) can be better understood in terms of a longer (falsified) record. Robert Bradley’s Capitalism at Work: Business, Government, and Energy, containing an excellent five-chapter history of Malthusianism from Malthus through Simon (see below), did not include the Osborn/Vogt link between Malthusianism and neo-Malthusianism. The current issue of EJSD fills that gap.

“Resources are Not, They Become”: Erich Zimmermann
The Calculus of Depletion: Harold Hotelling
Zimmermann Stalls Out
Hayek on Conservation
Paley Commission
Resources for the Future
An Eye Trained on Scarcity: M. A. Adelman