Population, Consumption, Carbon Emissions, and Human Well-Being in the Age of Industrialization (Part IV – There Are No PAT Answers, or Why Neo-Malthusians Get It Wrong)

Editor’s note. This is the conclusion of a four part series by Indur M. Goklany, in which the Neo-Malthusian view of the adverse effects of industrialization, economic growth and technological change is contrasted with empirical data on the substantial progress in human well-being during the age of industrialization. Having established this, he appropriately warns about predicting the future. For ease of reference, links to the previous three parts are included at the end.

Neo-Malthusians believe that humanity is doomed unless it reins in population, affluence and technological change, and the associated consumption of materials, energy and chemicals. But, as shown in the previous posts and elsewhere, empirical data on virtually every objective indicator of human well-being indicates that the state of humanity has never been better, despite unprecedented levels of population, economic development, and new technologies. In fact, human beings have never been longer lived, healthier, wealthier, more educated, freer, and more equal than they are today.

Why does the Neo-Malthusian worldview fail the reality check?

The fundamental reasons why their projections fail are because they assume that population, affluence and technology — the three terms on the right hand side of the IPAT equation — are independent of each other. Equally importantly, they have misunderstood the nature of each of these terms, and the nature of the misunderstanding is essentially the same, namely, that contrary to their claims, each of these factors instead of making matters progressively worse is, in the long run, necessary for solving whatever problems plague humanity.

The slowdown in the population growth rate, unanticipated by Neo-Malthusians, can be attributed to the fact that population (P) is dependent on affluence (or the desire for affluence) and technology (A and T in the IPAT equation). Empirical data show that as people get wealthier or desire greater wealth for themselves or their offspring, they tend to have fewer children. Cross-country data shows that the total fertility rate (TFR), which measures the number of children per women of child-bearing age, drops as affluence (measured by GDP per capita) increases (see Figure 1). Moreover, for any given level of affluence, TFR has generally dropped over time because of changes in technology, and societal attitudes shaped by the desire for economic development (see here). Most importantly, it is not, contrary to Neo-Malthusian fears, doomed to rise inexorably, absent coercive policies. 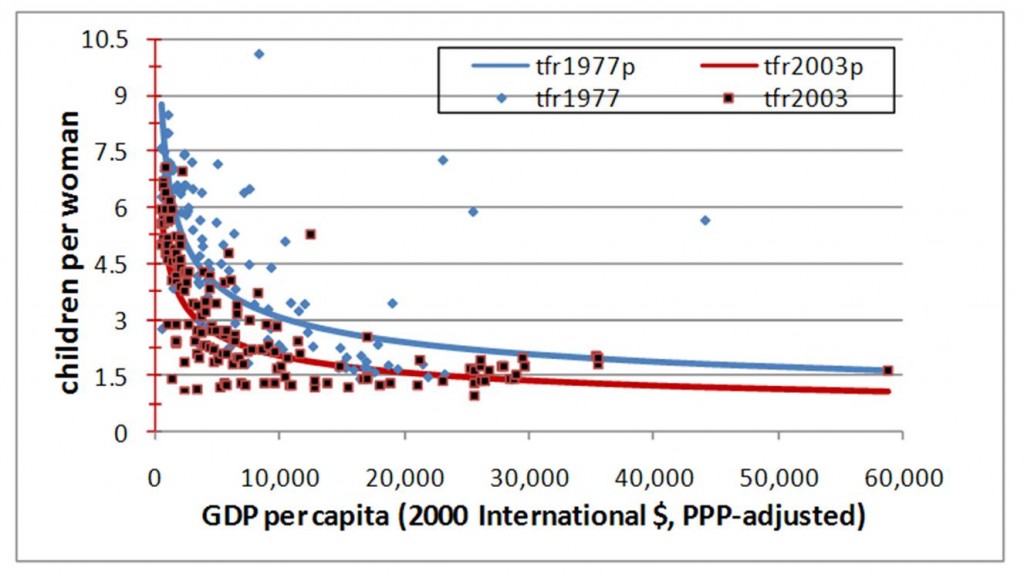 Neo-Malthusians also overlook the fact that, in general, affluence, technology and human well-being reinforce each other in a Cycle of Progress (Goklany 2007a, pp. 79-97). If existing technologies are unable to reduce impacts or otherwise improve the quality of life, wealth and human capital can be harnessed to improve existing technologies or create new ones that will. HIV/AIDS is a case in point.

The world was unprepared to deal with HIV/AIDS when it first appeared. For practical purposes, it was a death sentence for anyone who got it. It took the wealth of the most developed countries to harness the human capital to develop an understanding of the disease and devise therapies. From 1995 to 2004, age-adjusted death rates due to HIV declined by over 70 percent in the US (USBC 2008). Rich countries now cope with it, and developing countries are benefiting from the technologies that the former developed through the application of economic and human resources, and institutions at their disposal.

Moreover, both technology and affluence are necessary because while technology provides the methods to reduce problems afflicting humanity, including environmental problems, affluence provides the means to research, develop and afford the necessary technologies. Not surprisingly, access to HIV therapies is greater in developed countries than in developing countries. And in many developing countries access would be even lower but for wealthy charities and governments from rich countries (Goklany 2007a, pp. 79–97).

Because technology is largely based on accretion of knowledge, it ought to advance with time, independent of affluence — provided society is open to scientific and technological inquiry and does not squelch technological change for whatever reason. Consequently, indicators of human well-being improve not only with affluence but also with time (a surrogate for technology). This is evident in Figure 1, which shows TFR dropping with time for any specific level of GDP per capita. It is also illustrated in Figure 2 for life expectancy, which shows that wealthier societies have higher average life expectancies, and that the entire life expectancy curve has been raised upward with the passage of time, a surrogate for technological change (broadly defined). 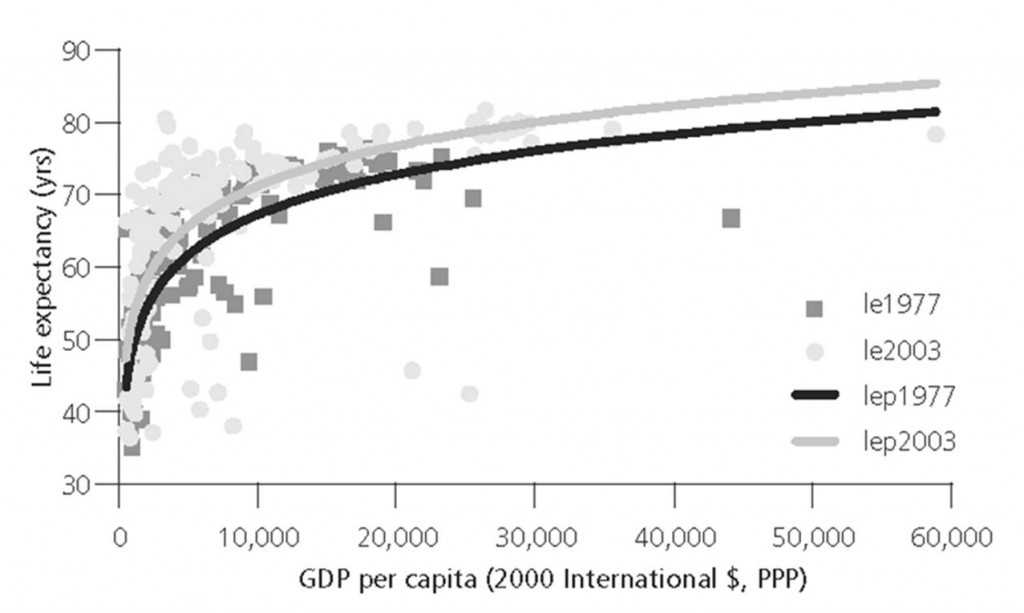 Figure 2: Life expectancy at birth vs. affluence (GDP per capita), 1977–2003, based on cross-country data from World Development Indicators 2005. Source: Goklany, “Wealth, Health and the Cycle of Progress,” in: Philip Stevens (ed.), Fighting the Diseases of Poverty (IPN Press, London, 2007).

Other indicators of human well-being — e.g., crop yield, food supplies per capita, access to safe water and sanitation, literacy, mortality — also improve with affluence and, separately, with time/technology (see here and here). This indicates that secular technological change and economic development, rather than making matters worse, have actually enhanced society’s ability to solve its problems and advanced its quality of life.

Moreover, population is not just a factor in consumption. It is the basis for “human capital.” No humans, no human capital. Humans are not just mouths, but also hands and brains. As famously noted by Julian Simon, they are the Ultimate Resource. This is something Neo-Malthusians have difficulty in comprehending. Notably, a World Bank study, Where is the Wealth of Nations?, indicated that “human capital and the value of institutions … constitute the largest share of wealth in virtually all countries.” A population that is poor, with low human capital, low affluence, and lacking in technological knowhow is more likely to have higher mortality rates, and lower life expectancy than a population that is well educated, affluent and technologically sophisticated, no matter what its size.

These factors — human capital, affluence and technology — acting in concert over the long haul, have enabled technology for the most part to improve matters faster than any deterioration due to population, affluence (GDP per person) or their product (GDP). This has helped keep environmental damage in check, (e.g., for cropland, a measure of habitat converted to human uses) or even reverse it (e.g., for water pollution, and indoor and traditional outdoor air pollution), particularly in the richer countries.

Thus, notwithstanding plausible Neo-Malthusian arguments that technological change would eventually increase environmental impacts, historical data suggest that, in fact, technological change ultimately reduces impacts, provided technology is not rejected through an inappropriate exercise of the precautionary principle or compromised via subsidies (which usually flow from the general public to politically favored elements of society).

To summarize, although population, affluence and technology can create some problems for humanity and the planet, they are also the agents for solving these very problems. In the IPAT equation, the dependence of the I term on the P, A and T terms is not fixed. It evolves over time. And the Neo-Malthusian mistake has been to assume that the relationship is fixed, or if it is not, then it changes for the worse.

A corollary to this is that projections of future impacts spanning a few decades but which do not account for technological change as a function of time and affluence, more likely than not, will overestimate impacts, perhaps by orders of magnitude. In fact, this is one reason why many estimates of the future impacts of climate change are suspect, because most do not account for changes in adaptive capacity either due to secular technological change or increases in economic development (see here and here).

Finally, had the solutions they espouse been put into effect a couple of centuries ago, most of us alive today would be dead and those who were not would be living poorer, shorter, and unhealthier lives, constantly subject to the vagaries of nature, surviving from harvest to harvest, spending more of our time in darkness because lighting would be a luxury, and our days in the drudgery of menial tasks because under their skewed application of the precautionary principle (see here, here and here) fossil fuel consumption would be severely curtailed, if not banned.

Nor would the rest of nature necessarily be better off.  First, lower reliance on fossil fuels would mean greater demand for fuelwood, and the forests would be denuded.  Second, less fossil fuels also means less fertilizer and pesticides and, therefore, lower agricultural productivity. To compensate for lost productivity,, more habitat would need to be converted to agricultural uses. But habitat conversion (including deforestation) — not climate change — is already the greatest threat to biodiversity!

The following are links to the first three parts of this series:

Part I – Revisiting the Julian Simon-Paul Ehrlich Bet: A Long Term View of Commodity Prices and Their Affordability

Part II – A Reality Check of the Neo-Malthusian Worldview: Global Trends in Human Well-Being in the Age of Industrialization, 1750–2007