Editor’s note: In Part III of this four-part series, Indur M. Goklany applies the general analyses of Part I and Part II to the impact of U.S. industrialization on human well-being and environmental improvement.

In my previous post I showed that, notwithstanding the Neo-Malthusian worldview, human well-being has advanced globally since the start of industrialization more than two centuries ago, despite massive increases in population, consumption, affluence, and carbon dioxide emissions. In this post, I will focus on long-term trends in the U.S. for these and other indicators.

Figure 1 shows that despite several-fold increases in the use of metals and synthetic organic chemicals, and emissions of CO2 stoked by increasing populations and affluence, life expectancy, the single best measure of human well-being, increased from 1900 to 2006  for the US.  Figure 1 reiterates this point with respect to materials use. 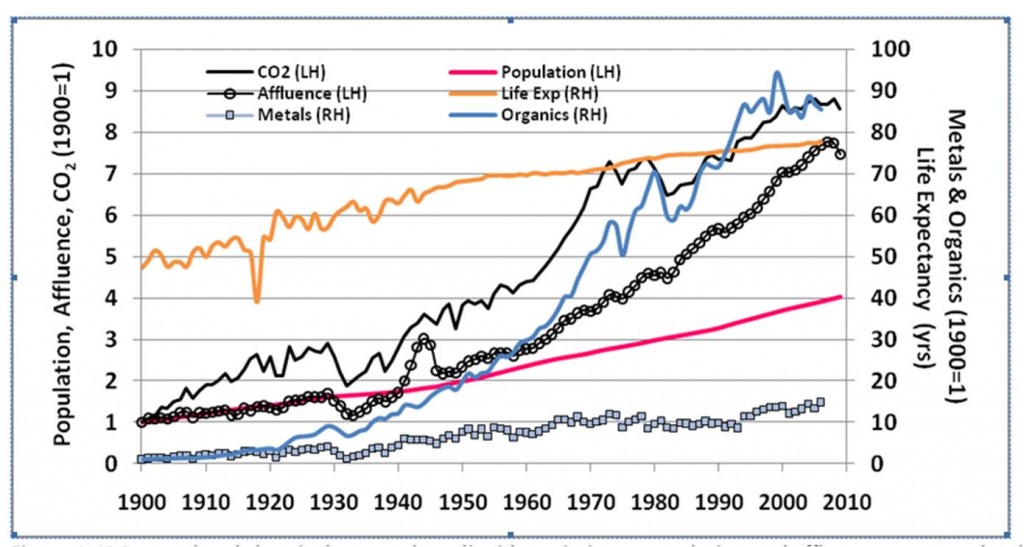 These figures indicate that since 1900, U.S. population has quadrupled, affluence has septupled, their product (GDP) has increased 30-fold, synthetic organic chemical use has increased 85-fold, metals use 14-fold, material use 25-fold, and CO2 emissions 8-fold.  Yet life expectancy advanced from 47 to 78 years.

Figure 2 shows that during the same period, 1900–2006, emissions of air pollution, represented by sulfur dioxide, waxed and waned. Food and water got safer, as indicated by the virtual elimination of deaths from gastrointestinal (GI) diseases between 1900 and 1970. Cropland, a measure of habitat converted to human uses — the single most important pressure on species, ecosystems, and biodiversity — was more or less unchanged from 1910 onward despite the increase in food demand.

For the most part, life expectancy grew more or less steadily for the U.S., except for a brief plunge at the end of the First World War accentuated by the 1918-20 Spanish flu epidemic. As in the rest of the world, today’s U.S. population not only lives longer, it is also healthier. The disability rate for seniors declined 28 percent between 1982 and 2004/2005 and, despite quantum improvements in diagnostic tools, major diseases (e.g., cancer, and heart and respiratory diseases) now occur 8–11 years later than a century ago. 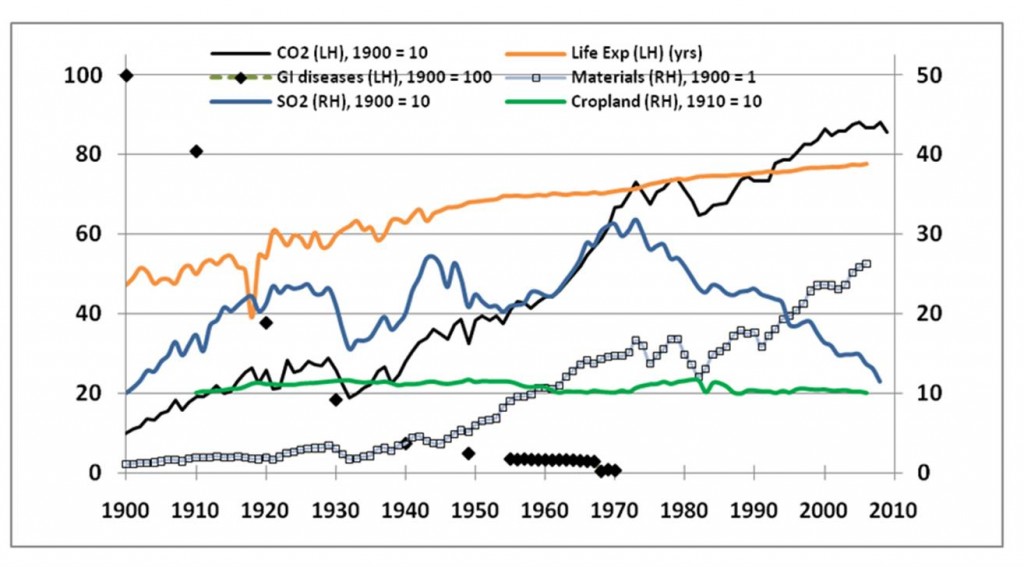 Consistent with this, data for New York City indicate that — despite a population increase from 80,000 in 1800 to 3.4 million in 1900 and 8.0 million in 2000 and any associated increases in economic product, and chemical, fossil fuel and material use that, no doubt, occurred —crude mortality rates have declined more or less steadily since the 1860s (again except for the flu epidemic).  Figures 3 and 4 show, once again, that whatever health-related problems accompanied economic development, technological change, material, chemical and fossil fuel consumption, and population growth, they were overwhelmed by the health-related benefits associated with industrialization and modern economic growth. 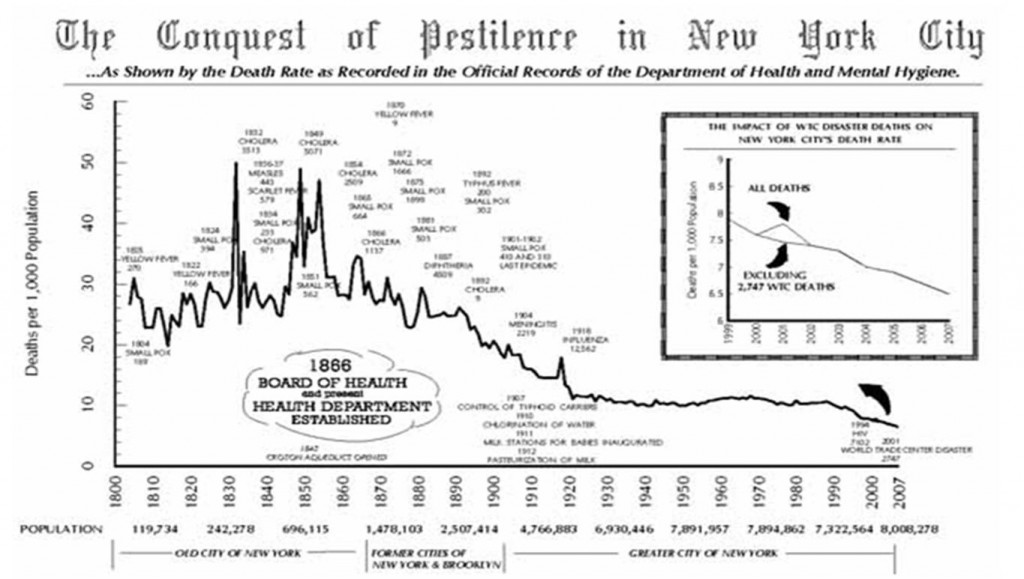 Figure 3: Death Rates (deaths per 1,000 population), New York City, c. 1800-2007. Source: NYC Department of Health & Mental Hygiene, Summary of Vital Statistics (2008). H/T to William Briggs for making me aware of this figure. This figure shows a stylized transition for mortality rate in the middle third of the 19th century consistent with the Environmental Transition Hypothesis

This does not mean that fossil fuel, chemical and material consumption have zero impact, but it  means that overall benefits have markedly outweighed costs. 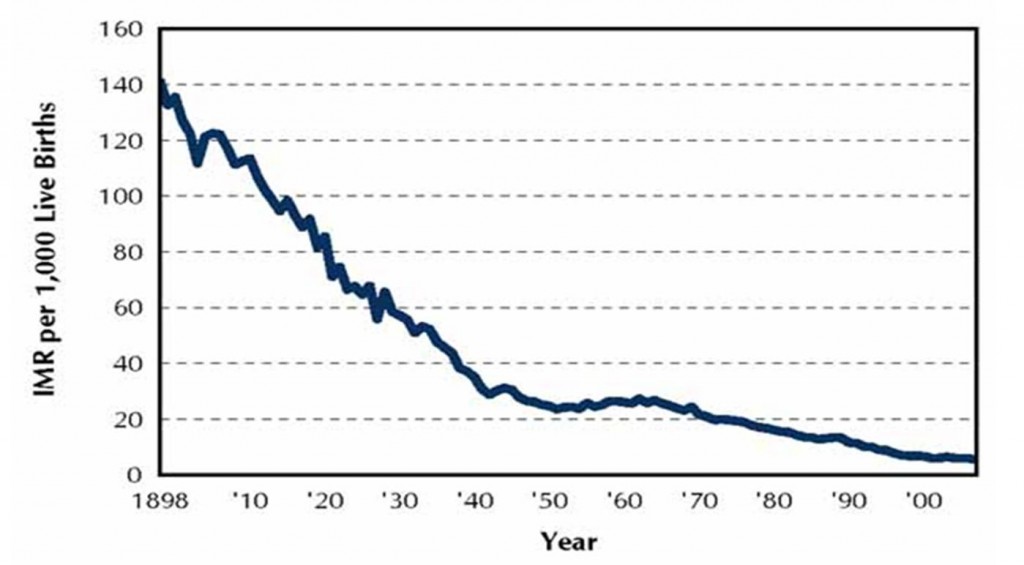 The reductions in rates of deaths and diseases since at least 1900 in the US, despite increased population, energy, and material and chemical use, belie the Neo-Malthusian worldview.  The improvements in the human condition can be ascribed to broad dissemination (through education, public health systems, trade and commerce) of numerous new and improved technologies in agriculture, health and medicine supplemented through various ingenious advances in communications, information technology and other energy powered technologies (see here for additional details). The continual increase in life expectancy accompanied by the decline in disease during this period (as shown by Figure 2) indicates that the new technologies reduced risks by a greater amount than any risks that they may have created or exacerbated due to pollutants associated with greater consumption of materials, chemicals and  energy,

And this is one reason why the Neo-Malthusian vision comes up short. It dwells on the increases in risk that new technologies may create or aggravate but overlooks the larger — and usually more certain — risks that they would also eliminate or reduce. In other words, it focuses on the pixels, but misses the larger picture, despite pretensions to a holistic worldview.

It was this mindset — legitimized as the “precautionary principle” — that led, for instance, to the premature reduction in DDT usage even in areas where malaria was endemic and could be reduced through its use. See here and here.

In my next post, I will look at the root causes as to why empirical trends have failed to follow a path consistent with the Neo-Malthusian worldview.