Population, Consumption, Carbon Emissions, and Human Well-Being in the Age of Industrialization (Part I — Revisiting the Julian Simon-Paul Ehrlich Bet)

Editor’s note: As the United States commemorates the 40th anniversary of Earth Day we can expect to hear various commentators bemoan the growth in population, consumption, and carbon emissions driven by fossil-fueled technologies. We will be told that this is unsustainable, that we are running out of resources, that prices are inevitably headed up, and, worse, that such consumption reduces both environmental and human well-being. In this worldview, industrialization and economic development are the inventions of the Devil; de-industrialization and de-development will be our savior.

In this series of posts, Indur M. Goklany will compare the above Neo-Malthusian view of industrialization, economic growth, and technological change against empirical data on human well-being from the age of industrialization. First, he will revisit the bet made in 1980 by Julian Simon and Paul Ehrlich on the direction of commodity prices, and examine long-term trends in the prices and affordability of various commodities, specifically, metals and food, going back to at least 1900. Parts II and III will compare long-term trends in population, consumption, economic development, and carbon emissions against trends in human well-being for the world and the United States, respectively. Part IV will provide an explanation as to why the empirical data is at odds with the Neo-Malthusian worldview.

This series of posts draws liberally from: Goklany IM (2009), Have increases in population, affluence and technology worsened human and environmental well-being? Electronic Journal of Sustainable Development, vol. 1, no.3.

Based on the run-up in global commodity prices over the last decade, some observers speculate that Julian Simon lucked out in winning his famous bet with Paul Ehrlich. Paul Kedrosky, for instance, notes that had the bet been made in subsequent years, Simon would, more likely than not, have lost. And, indeed, there is an element of truth to that, but that would not vitiate Simon’s larger point, namely, that human ingenuity left to itself would probably reduce the the price of goods and, more importantly, advance the state of humanity.

In my opinion, the direction of commodity prices in the bet itself served as a surrogate for the fundamental difference between the worldviews of the two protagonists, namely, whether human well-being would advance over time considering increases in population, and economic and technological development. In fact, some Neo-Malthusians opine that present day populations are already too large, while others of the same ilk believe that continued economic and technological development is unsustainable (see, e.g., here).

But before getting into the larger and more important issues, let me first address the bet itself. Recall that the bet was made in 1980, and the late 1970s and 1980 had seen a spectacular increase in commodity price following the second oil shock. But what goes up is also likely to come down. Statisticians call this the regression to the mean. And Simon, being an economist and an entrepreneur at heart, took a calculated risk and “gambled” on that.

And, indeed, commodity prices reverted to trend and prices turned down during the 1980s. So fortune favors the prepared, and Simon was the better prepared and, perhaps, the wiser of the two protagonists. But he was also lucky, because 10 years is but a brief moment in the context of history. The appropriate period to determine whether Simon or Ehrlich’s worldview is better aligned with historical reality is to look at the matter over many decades, if not generations.

Figure 1 shows the ups and downs in metal price indices since 1900. 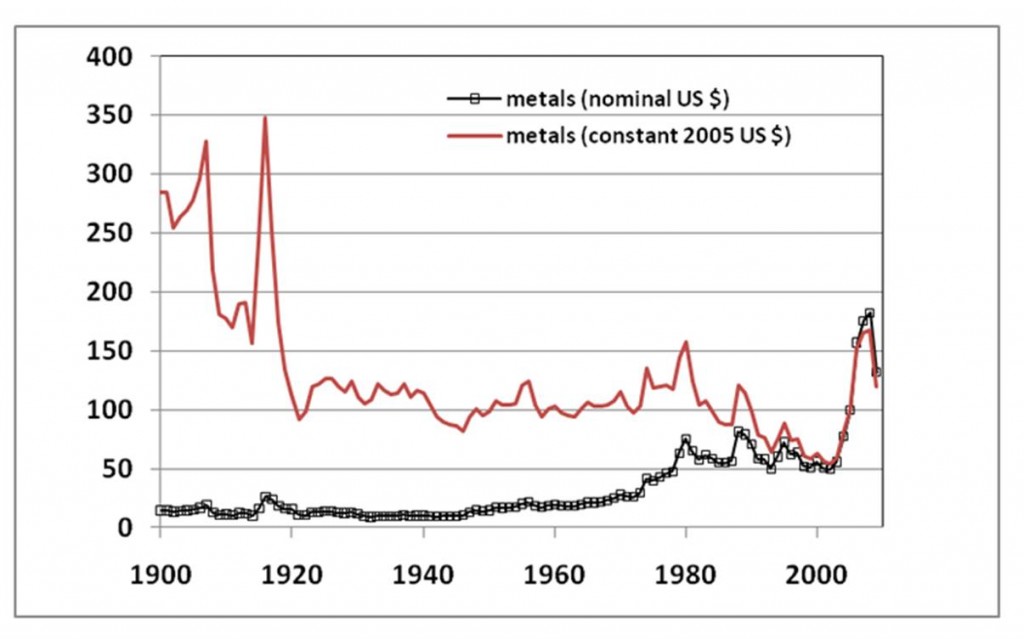 Predictably, nominal prices have increased over the long term. Real prices, on the other hand, while fluctuating, have generally trended downwards but with a big bounce in the 2000s. Real prices peaked in 2008, but at a level substantially lower than they were in the early decades of the last century when the world’s population was less than a third — and GDP, a surrogate for overall consumption, about a twentieth — of what it is today. Prices have dropped since 2008, but are rising once again because of the global economic recovery, albeit more modestly.

The price increases in the early 2000s should be viewed as a victory for humanity rather than with dismay. It was fueled by an increase in demand in developing countries, mainly China and India, as they joined the rest of the world in benefiting from modern economic growth. This demand drove — and was driven by — the economic development that has turned out to be the most effective poverty reduction machine ever devised. From 2002 to 2005, according to the World Bank’s PovcalNet, the number of people living in absolute poverty in developing countries declined by 230 million (from 1.60 billion to 1.37 billion) despite a population increase of 210 million. Higher commodity prices for the affluent West seems to be a minor inconvenience in light of that (see below).

Real prices, however, miss out on a critical factor. What is important is not whether metals prices have dropped or increased but whether metals are more or less affordable. Wages and income also change over time, generally rising over the longer term. Thus prices should be adjusted to reflect changes in wages or incomes. Accordingly, I define Affordability as the ratio of average per capita income to price. Figure 2 shows the trends in the Metals Affordability for India and the US from 1900 to 2009, based on indexing the affordability of metals in the US in 1900 to 100. 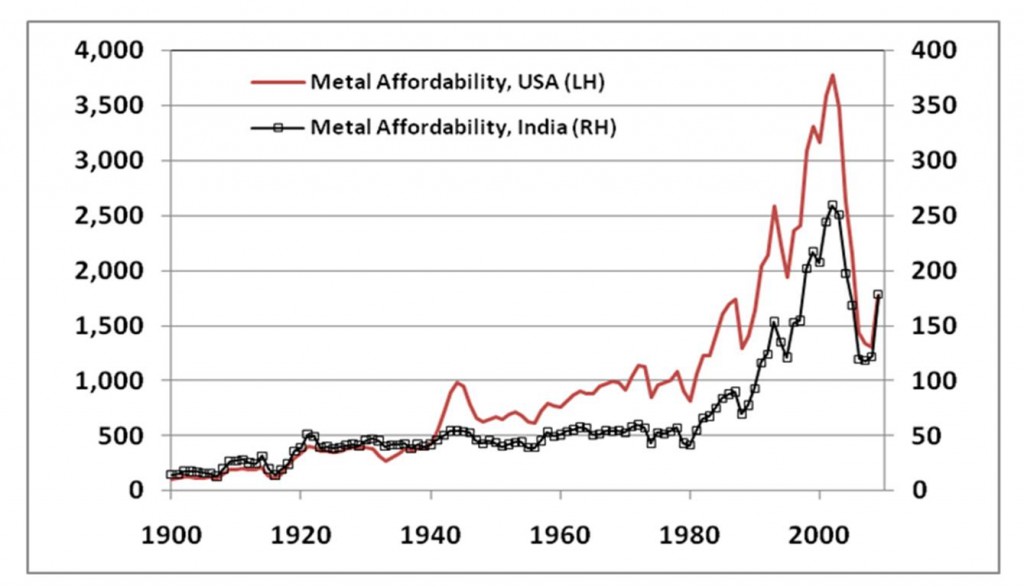 Figure 2: Metals Affordability, US and India, 1900-2009; US 1990 level = 100. Updated from Goklany (2009), Have increases in population, affluence and technology worsened human and environmental well-being? Electronic Journal of Sustainable Development, vol. 1, no.3, based on sources cited therein. Note that the left hand axis is for the US, and the right hand axis for India.

· Despite the price run up in the past decade, and notwithstanding the massive increase in demand from larger and wealthier populations, metals are more affordable now than they were for most of the past century.

· There has been a general increase in affordability in both the US (left hand scale) and India (right hand scale).

· Metals affordability is 10 times higher for the US currently than it is for India. This spread is about the same as it was in 1900.

· Metals affordability increased by more than an order of magnitude since 1900 in both the US and India.

Going back even further to 1800, Figure 3 shows the trends in prices for various metals relative to wages for the US from 1800 to 2007. This figure suggests that the latest increase in prices is just a speed bump in the long road of history. 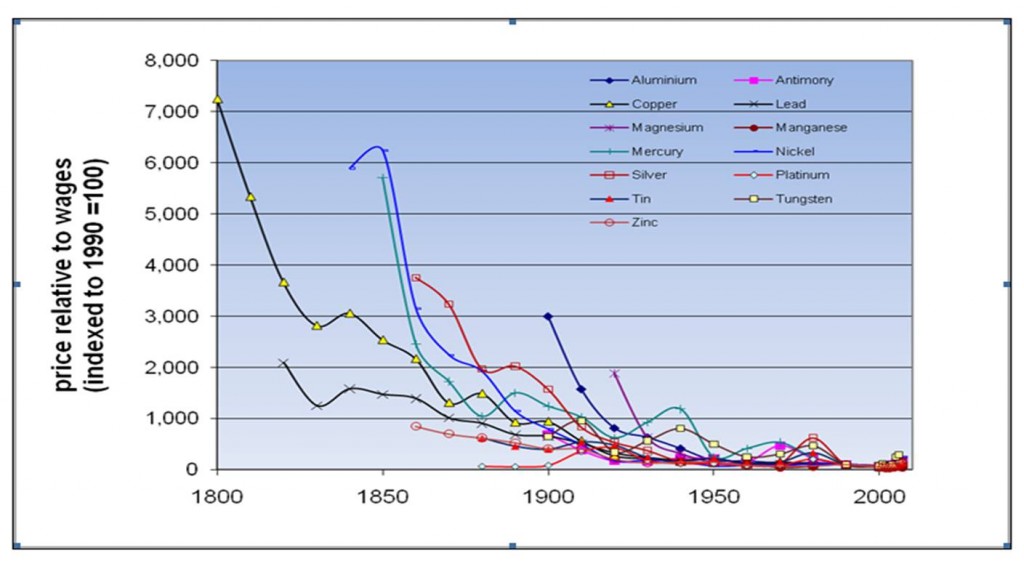 Even more critical for humanity than metals is food, which was Malthus’s original concern. The world’s population has more than quadrupled since 1900. Despite that, and the fact that average real income per capita (adjusted for purchasing power) has sextupled (which ought to further increase demand), food is more affordable today, as indicated by Figure 4. The increased affordability of food from the 1950s onward is the reason why the massive increases in hunger and famines in the developing world foretold by Neo-Malthusians in the 1950s and 1960s never materialized. So much for Malthus and his modern day disciples. 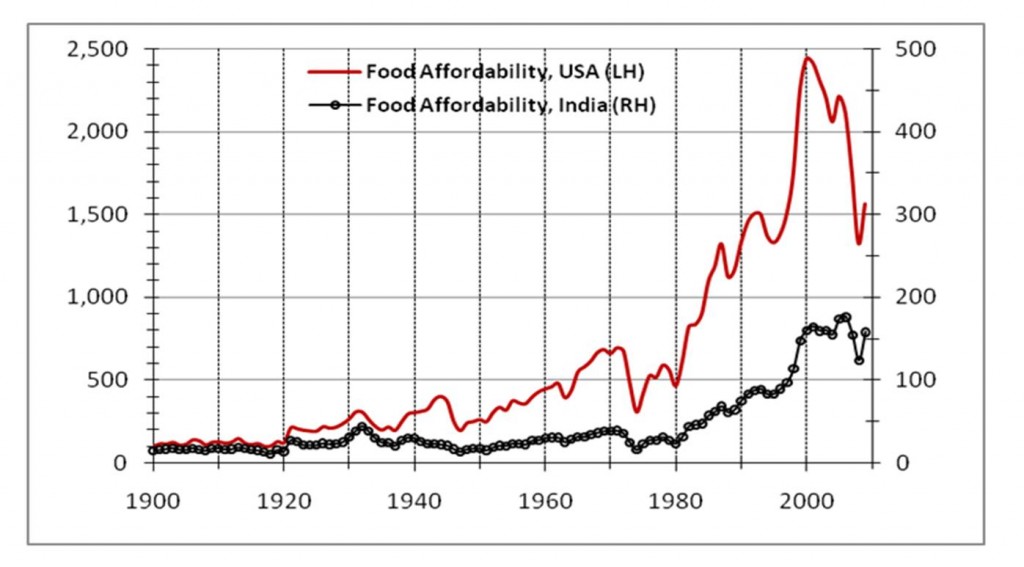 Figure 4: Food Affordability, US and India, 1900-2009; US 1990 level = 100. Updated from Goklany (2009), Have increases in population, affluence and technology worsened human and environmental well-being?

Of course, a good portion of the increase in affordability over the long term is that real incomes have increased worldwide. So there is at least one resource whose price continues to increase — human beings!

Although the above figures (2–4) indicate that commodities have indeed become more affordable over the long term, there is no guarantee that will continue into the future. Trend is not destiny, but if we wish for positive trends to continue we should understand what drove them in the first place, and try to ensure that the underlying driving forces are sustained. Although this is not a panacea, it does increase the chances of further improvement. Underlying the increases in affordability is a reasonably free market economic system that respects property rights, embraces freer trade, and rewards innovation and risk taking (Goklany 2007). These have ensured that commodities are economically less scarce today than in times past and boosted incomes everywhere, thereby increasing their affordability.

Finally, whether certain commodities will continue to become more affordable is actually beside the point. If a brand new use of great benefit to humanity were to be devised for an old commodity, one should not be surprised if its price were to rise. But instead of signaling a worsening of human well-being, that would indicate an improvement (in well-being). The real issue is not whether commodity prices are going up or down but whether human well-being is going up or down. And this is what sets the Neo-Malthusian pessimistic world view apart from that of outright optimists, or more guarded optimists and pessimists.

In my next post I will address whether long term trends are consistent with Neo-Malthusian prognostications that increased population, affluence (a proxy for consumption per capita), technological change and carbon emissions have reduced human well-being over the long haul.