“Many of the writers about ‘peak oil’ have moved on to ‘peak everything’ (Richard Heinberg) and ‘peak food’ (Paul Roberts). They apply the same flawed model that treats resources as static and ignores investment and innovation. This is especially telling since the model has failed so abysmally in the case of food and famine, as the record of Paul Ehrlich and his followers has shown.”

In his excellent book, Future Babble, Dan Gardner demonstrates empirically that the neo-Malthusians who have plagued us for the past half century have not only been egregiously wrong in their predictions; they have tended to insist that they were, in fact, correct, all contrary evidence notwithstanding. They accomplish this primarily by selective memory, such as greatly understating their original claims, or treating minor, regular difficulties (such as local famines) as confirmation of their apocalyptic visions.

Others have made efforts to argue that the original work was, in some way, valid. These efforts are usually seized upon unreservedly by like-minded individuals. Mathematical contortions to prove that Paul Ehrlich really did win his bet with Julian Simon that commodity prices would rise by 1990 are among the most amusing, but a more complex question concerns the modeling effort used in The Limits to Growth: A Report for THE CLUB OF ROME’S Project on the Predicament of Mankind (1972).

A number of past efforts have been made to rehabilitate Limits to Growth, much of it little more than agreeing with its sentiment, such as Matthew Simmons’ 2000 White Paper [1] which noted that the previous thirty years had seen trends similar to what the LTG authors projected, then argued that the global political economy is worsening as predicted. (See R. Bradley’s criticism here.)

Now, two reports have appeared claiming that new research vindicates the predictions of the Limits to Growth, saying they have been found to be “… not only right but extremely accurate since 1972!”[2] Not surprisingly, the attention comes primarily in places like the Huffington Post and the Guardian newspaper, with the latter printing an article by the author of one of the research papers.

(The Huffington Post article, by Alexandre Lemille, is typical in not only misidentifying the Australian body that published the original working paper, but not realizing that the Club of Rome was a sponsor of the Limits to Growth, and its ‘confirmation’ of the validity should be treated with a dose of salt. It is also interesting that she is referring to work from 2008/9, which she apparently discovered after reading the Guardian article by Turner.)

Turner looks at various factors like food production and population and finds that the LTG projections were reasonably accurate to date, therefore he concludes that the model was valid.  And Hall and Day [3] make the same points, only adding the issue of Energy Return on Investment, a pet issue of theirs.  But the authors all are amazed that the original projections have held up fairly well, and consider that to be a refutation of the criticisms that the model has received.  No doubt these will now join the circle of citations with writers like Lemille using them as proof that the neo-Malthusian theories are validated.

A more open-minded person might raise a few objections. The figure below, taken from Turner, shows that the LTG correctly predicted that existing trends would continue—something that was hardly novel or controversial.  But the entire focus of their exercise, that the trends would reverse, has not occurred yet.  This is roughly the same as someone who predicts that a boat will sail off the edge of the Earth in seven days, and after five days of smooth sailing, argues that they were correct. 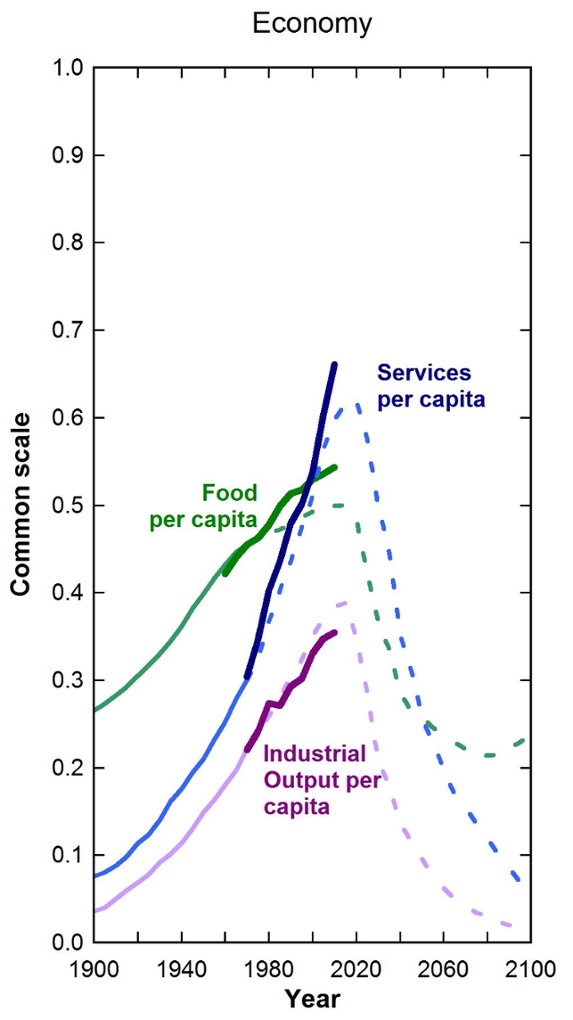 That anyone would consider this to confirm the original predictions is bizarre, to say the least.  Nothing at all has occurred to suggest that the world is on the verge of the types of resource constraints that would affect global economic growth as the LTG model claimed.  Both Turner and Hall and Day point to high commodity prices in recent years as suggesting that problem are looming, but already those prices have largely fallen—just as in every other commodity cycle.  Indeed, these authors are repeating the mistakes of many other neo-Malthusians by misinterpreting short-term problems as representing a new paradigm.

The logical errors can be astounding.  Hall and Day argue that the gasoline lines of the 1970s “confirmed in the minds of many” that arguments about the finite resources were correct.  From the wording, they seem to be explicitly avoiding saying that the arguments were correct, but since four decades of continued resource depletion have occurred since the 1970s without scarcity appearing, one is left wondering about the logical inconsistency.  Needless to say, those better informed of the energy markets would note that temporary disruptions to oil supply, unrelated to resource scarcity, and especially federal price and allocation regulation, [4] were responsible for the higher prices and gasoline lines, respectively.

Turner, echoing the LTG group’s later claims, also believes that the depletion of resources in the interim decades since 1972 means we are getting closer to scarcity. How close? Well, he relies on oil resource estimates from three sources, one a peak oil analyst and another a geologist. They are both relying on other sources and the geologist has revised his estimate upwards substantially. The third source, Rogner (1997) [5], is dated; numerous recent estimates are much higher. Turner is either unaware of the literature or chooses to ignore it.

There is an interesting correlation here:  many of the writers about “peak oil” have moved on to “peak everything” (Richard Heinberg) and “peak food” (Paul Roberts). They apply the same flawed model that treats resources as static and ignores investment and innovation. This especially telling since the model has failed so abysmally in the case of food and famine, as the record of Paul Ehrlich and his followers has shown.

And they fall into the same theoretical mistakes as earlier neo-Malthusians: assuming no feedback effects, particularly from prices, and completely ignoring the potential for technological progress. Turner, Hall and Day undoubtedly think Julian Simon should be spinning in his grave, but he is surely laughing instead.