[Editor Note: Wind energy is not a new technology as previous posts at MasterResource have discussed (listing at end below). This excerpt is from a longer article, “Changing Winds: The Evolving Wind Turbine,” published in the April 2011 issue of POWER. Ms. Patel is the senior writer with the monthly magazine.]

“The use of wind power is as old as history.”

From as early as 25–220 A.D., wind energy has been harnessed for practical purposes. The late nineteenth century began the era of large structures capturing wind to convert to electricity. This post describes early applications of this technology.

The first wind turbine used to convert wind energy into power—unlike windmills, which are used to pump water or grind grain—was built by Professor James Blyth of Anderson’s College, Glasgow (now Strathclyde University) in 1887. Blyth’s experiments with three different turbine designs resulted in a 10-meter-high (33-foothigh), cloth-sailed wind turbine, which was installed in the garden of his holiday cottage at Marykirk in Kincardineshire. It is said to have operated for 25 years.

Blyth’s invention marked the dawn of wind turbine development. Close on its heels was a turbine built by American inventor Charles Brush in 1888. That 12-kW turbine featured 144 blades made of cedar, each with a rotating diameter of 17 meters (m) (Fig. 1). Then came the work of Danish scientist Poul la Cour in the 1890s, which spawned about 2,500 turbines in Denmark by 1900, with an estimated combined peak power capacity of 30 MW. La Cour’s wind turbines produced hydrogen as well as power. 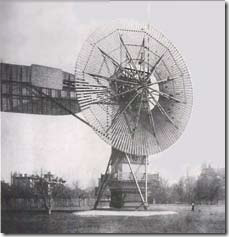 Wind-powered turbines were installed by the millions around the world thereafter, particularly in the American Midwest, where between 1850 and 1900 they were used to power irrigation pumps.

By 1931 the first forerunner of the modern horizontal-axis wind generators was put into service at Yalta, in Russia. It was a 100-kW generator on a 30-meter-high tower that featured a load factor of 32%.

The first modern wind turbine was built in Denmark around mid-century. According to the Danish Wind Industry Association (DWIA), the 200-kW Gesder wind turbine (Fig. 2) was built in 1956 by engineer Johannes Juul for electricity company SEAS on the Gedser coast in southern Denmark. 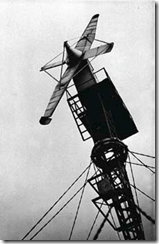 The concept—a three-bladed upwind turbine with electromechanical yawing and asynchronous generator—was a “pioneering design for modern wind turbines, although its rotor with guy wires looks a bit old fashioned today,” says the organization.

The turbine was stall-controlled; Juul invented the emergency aerodynamic tip brakes, which were released by the centrifugal force in case of overspeed. “Basically, the same system is used today on modern stall-controlled turbines,” the organization says, noting that Juul’s turbine ran for 11 years “without maintenance.”

The 1973 Energy Crisis: Government Comes In

Wind power caught new wind after the first oil crisis in 1973. Denmark, Germany, Sweden, the UK, and the U.S., among other countries, scrambled to design larger turbines.

In 1979, Danish developers succeeded in building two 630-kW wind turbines, a pitch-controlled and a stall-controlled model. However, “In many ways they suffered the same fate as their even larger colleagues abroad,” says the DWIA. “The turbines became extremely expensive, and the high energy price subsequently became a key argument against wind energy.”

For industrial wind technology in the present era, including experimental technologies being offered and designed today, please see my full article here.

Windpower Is Not an Infant Industry!

Wind: Energy Past, not Energy Future (the intermittency curse then, as now)