“There was no reason to prohibit the manufacture of incandescent lamps, other than for ideological reasons, when LEDs were becoming available. Industry and science, under the free market system, had already developed the technology that would replace incandescent lamps in a far less costly and far more orderly manner.”

People striving to improve energy efficiency and cut carbon dioxide (CO2) emissions often over-simplify lighting and do economically inefficient, counterproductive things. This led to Congress needlessly prohibiting the manufacture of most types of incandescent bulbs to cut CO2 emissions. This was an early manifestation of CO2 hysteria and ignored advances in lighting technology and the purpose of lighting.

Lighting has three primary purposes: (1) Facilitate seeing; (2) Safety; (3) Esthetics. Each is considered in some detail below.

1. Facilitate Seeing The amount of light on a surface, as measured in foot-candles, or lumens per square foot, determines how easily objects can be seen.

Standards have been established for light levels on surfaces under varying applications.

Machine tool surfaces can require 100-foot candles. Reading also usually requires 100 foot-candles on the surface of the item being read. Some precision applications require much higher levels of lighting.

The Illuminating Engineering Society has published tables in their handbook showing recommended light levels for various tasks. These tables may also show required levels of light based on people’s age.

When selecting any type of lighting, it is important to determine the amount of light that will reach the surface, which depends on the square of the distance from the light source.

This is why fluorescent lighting isn’t suitable for use in factory-high bays. The required amount of light does not reach working surfaces. High-intensity discharge lamps have usually been used in these applications.

Homes with twenty-foot-high ceilings will require more recessed light fixtures than rooms with eight-foot-high ceilings, or, alternatively, bulbs that have higher Lumen ratings. When converting incandescent floodlights (R40 or R60 ceiling lights) to fluorescents or LEDs, it is important to know the lumen output and not just the wattage equivalence.

The lumen output will determine the amount of light, in foot-candles, that reaches  the surface.

2. Safety Safety is the second purpose for lighting.

3. Esthetics Esthetics may initially seem trivial, but in many situations it is vitally important.

Department stores are prone to use white light, with temperatures around 5,000 K, for displays. This is close to daylight, which is how people prefer seeing clothing and objects.

Incandescent lighting typically creates a warm ambiance, which many find pleasing. Artists and photographers are very sensitive to how color temperatures affect their subjects. Even shadows are important, especially in portraits. Cities around the world appear bathed in a yellow hue from sodium vapor street lights when approached by air.

The architectural committee of Reston, Virginia, a community of 60,000, insisted on white light for outdoor lighting. They prohibited the use of sodium vapor lamps, which were far less costly to operate than the metal halide lamps the committee desired for street lighting. It was the committee’s belief that white light rendered objects and surroundings far more pleasantly than did sodium vapor lamps.

LEDs to the Rescue

LEDs have come to the rescue. They last several times longer than metal halide lamps and consume less electricity.

In this instance below, LEDs provide lower cost and longer life. But, for the average homeowner, LEDs are more expensive and may not result in lower costs. 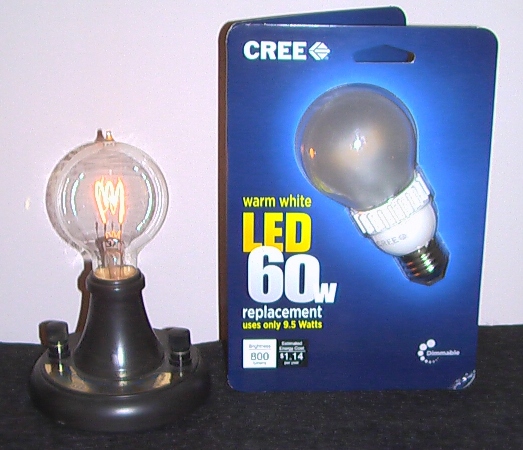 LEDs are the only technology that can significantly improve energy efficiency over the next 15 years without adversely affecting people’s living standards. When other proposals are examined, they either achieve minuscule reductions in electricity usage or require people to lower their standard of living.

It was ludicrous for Congress to outlaw incandescent lighting so as to cut CO2 emissions for ideological reasons, without considering the science and cost of lighting. At the time Congress enacted the legislation, LEDs were being developed that could emit white light, suitable for reading and for replacing metal halide and other sources of white light. They would also be able to eliminate the use of compact fluorescent lamps that contained mercury.

There was no reason to prohibit the manufacture of incandescent lamps, other than for ideological reasons, when LEDs were becoming available. Industry and science, under the free market system, had already developed the technology that would replace incandescent lamps in a far less costly and far more orderly manner.

Homeowners were forced to search for incandescent lamps that became increasingly scarce, and to use expensive LED lamps in applications where they were far more costly than inexpensive incandescent bulbs. A 60-watt LED lamp cost more than $20 at the time, while a 60-watt incandescent bulb only cost 60 cents.

While the cost of LED lamps has come down considerably, using an LED lamp in a closet for a few minutes each day was, and still is, a terrible waste of money for the average homeowner. Decorator lamps, emitting light at color temperatures similar to incandescent bulbs, cost far more than the incandescent bulbs that are no longer available.

The cost of LEDs continues to come down, which, when combined with their longer life, make LEDs a better buy than comparable incandescent bulbs. (The end-of-life for residential LEDs use is determined by when emitted light has been reduced 30 percent.)

This is not the false 75% reduction activists claim is possible, but it will be a remarkable achievement that can improve, not reduce, our standard of living. But remember: Industry and free markets produced this revolution in lighting, not Congress or environmental activists.