“Perhaps in a new free-market era the functional equivalent of an anti-Lois Lerner will investigate such rent-seeking entities as the Regulatory Assistance Project. Meanwhile, be warned: RAP may soon be coming to a Public Service Commission or environmental program near you, if they haven’t been there already.”

The Regulatory Assistance Project (RAP) may be one of the most influential “clean energy” not-for-profit organizations you’ve probably never heard of. RAP’s long-standing general policy to keep off the radar screen may be changing as this organization becomes emboldened by their own rhetoric. But behind the scenes, RAP is effectively demoting gas-fired end-use technologies, including cogenerated power capacity, in favor of renewables and forced efficiency that favors electrification.

In the beginning, RAP was involved with electric utility rate-case proceedings before state utility commission’s in the area of “energy efficiency.” Now, RAP’s rap is more orientated towards the  inevitability and affordability of renewable electricity as society’s best option to combat global warming.

What is mission of this organization? A self-description can be found on their IRS Form 990 and on the homepage of the RAP website. However, their most revealing description is from their website’s section titled ABOUT RAP (reproduced verbatim):

I contend that RAP’s emphasis is not on ‘cost-effective’ resources, as traditionally designed by applied economics. ‘Cost-effective’ appears to have a different meaning to RAP.

My own personal experiences with RAP date back to early 1993 when I was working for Southern Union Gas Company in Austin, Texas. During that time I provided expert witness testimony for the Environmental Defense Fund (EDF) as an intervenor against the Texas Utilities Electric Company (TU) in Docket 11735, etc.

Yes, you read that right. I was representing EDF back then (I have since repented). Regardless, during this Docket, someone (I think from the Texas Public Utilities Commission), brought in RAP’s founder, David Moskovitz, and his team to “advise” the intervenors.

Moskovitz’s startling revelation to us was basically not to bother. Yes, he admitted we could get a few disallowances, but, in the end, it was far better to work with TU than to work against TU. (This was back when environmental groups had a consumer focus as well being against utility costs.)

At any rate, I didn’t follow RAP’s advice, but later, EDF started to take a different approach with TU. It was around 2006. Specifically, EDF got in the middle of a major TU merger (becoming TXU) by getting the company to disinvest in coal and “go green” instead. The result (in part, at least) was that TXU went into bankruptcy proceedings. There is a “teachable moment” is this somewhere.

My next involvement with RAP came in 2001. RAP got a contract from the US Department of Energy through the National Renewable Energy Laboratory (NREL) regarding “Model Regulations for the Output of Specified Air Emissions from Smaller-Scale Electric Generation Resources.”

The following charts (excerpted from my comments) illustrate the potential impact of their proposal in regards to two specified emissions NOx and PM 10. 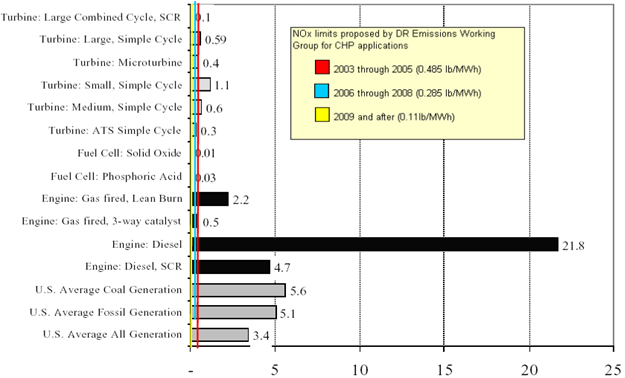 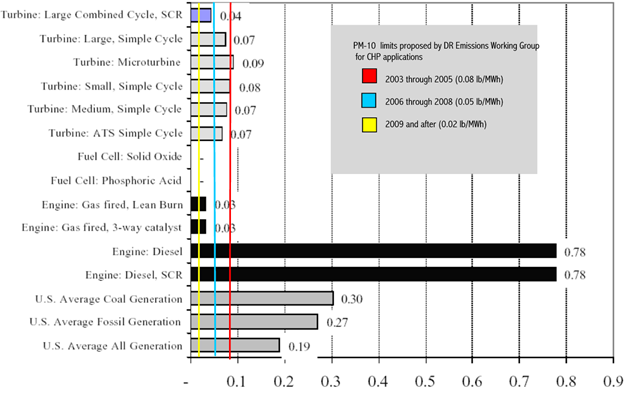 What the vertical red, blue and yellow lines represent are RAP’s emissions permits that start ultra-low then further ratcheted-down over time. Fortunately, RAP’s proposed emissions limits have yet to be widely implemented by Federal or State air quality regulators.

The key word is yet. There is more to come. NREL’s involvement with RAP (through DOE) may have begun what could be deemed the hijacking of CHP by renewable dominated “distributed generation” (DG) over the last decade.

In the present decade, RAP has been establishing its presence in Europe and China, basically along the same electrocentric “rap” (pun intended) for “clean energy.” The following are RAP’s related news releases relative to Europe and China.

My latest dealings with RAP are related to a recent article from Jim Lazar, a “senior advisor” to RAP, about so-called “duck curves,” a term given for electric load factors (demand shapes) in California. This article was titled: Long live the duck — and may he fly flat. [1]

As a side note: the concept of “duck curves” was also addressed in my latest article on Master Resource titled: “Grid-Enabled” Water Heating: ‘Deep Decarbonization’ as Crony Environmentalism” (Part 1 & Part 2). Other “solutions” suggested by Mr. Lazar included that of grid-enabled water heating. So I sent him an email asking him the following:

You should know, Jim, that the direct use of natural gas could help flatten “duck curves.” So what’s the deal? Is natural gas “clean energy” if used to make centrally-generated electricity but not if used directly?

The essence of Lazar’s response was:

[If you read Roadmap 2050 carefully, you’ll see that in order to achieve an 80% reduction in total GHG emissions, most loads now served with natural gas will need to be electrified. After you’ve read it, I’d be happy to take this issue up with you again. This was a turning point for me — until then I was still working on direct use of gas as a climate strategy. It works fine to achieve a 20% reduction, but not an 80% reduction.

Bottom line: in 1990 I thought direct use of gas was both economical and environmental. Today I have been moved by a combination of technology and climate science to a more evolved perspective. That may not be welcome news for a person working for a natural gas utility.]

So I read “Roadmap 2050” and learned that RAP was a research participant. What this roadmap represents is basically some of the ostensible details to achieve the United Nations utopia of carbon-free (electric) energy. Consequently, it may also represent the “roadmap” for Europe to eliminate fossil fuels in accordance with COP21 summit of the U.N. Framework Convention on Climate Change. This is evidenced by the following articles:

RAP is well paid for their advocacy and has been effective. Their IRS Form 990, however, does not indicate who pays them.

From personal experience, I know DOE and EPA did pay RAP in the past and may still. Most likely, RAP is now being funded by the usual climate fear mongers, such as the Pew Charitable Trust, the Hewlett Foundation, etc.

It would not surprise me if RAP receives funding from electric and renewable interests both domestic and abroad, with the latter including EUELECTRIC, whose mission is basically indistinguishable from that of the United Nations Environment Programme (UNEP) and COP21. Since disclosure requirement of “green” non-profit institutions is incredibly lax under present IRS regulations, it is difficult to discover who funds RAP.

Perhaps in a new free-market era the functional equivalent of an anti-Lois Lerner will investigate such rent-seeking entities like RAP. Meanwhile, be warned: RAP may soon be coming to a Public Service Commission or environmental program near you, if they haven’t been there already.

[1] “Duck Curves” basically illustrate the ability to maintain reliable service as increasing amounts of variable renewable energy – primarily wind and solar – are added to a grid that has historically consisted overwhelmingly of “dispatchable” resources such as coal, natural gas, and hydropower units. This has been described in many ways, with the California ISO portraying this as a “Duck Curve” comparing the “gross system load” of customer consumption to the “net system load” after deducting the amounts expected to be provided by non-dispatchable resources.