“The IPCC seems more intent on trying to maintain the now-dying consensus than in following climate science to its logical conclusion—a conclusion that increasingly suggests that human greenhouse gas emissions are less important in driving climate change than commonly held.”

Several weeks ago, the United Nations’ Intergovernmental Panel on Climate Change (IPCC) released the climate science portion of its Fifth Assessment Report (AR5). The AR5 is so burdened by fundamental flaws that it is worthless, or worse, misleading, as a resource to ground policy decisions regarding energy choices.

The IPCC seems to favor the output of computer climate models over that of hard observational science—science which indicates that computer models warm the earth’s temperature too fast for a given input of greenhouse gases to the atmosphere. Using climate models which are too sensitive to greenhouse gases leads to projections of future warming and all its resultant impacts—the meat of the IPCC report—which are too high.

By putting forth such projections, and ignoring the new science, the IPCC seems more intent on trying to maintain the now-dying consensus than in following climate science to its logical conclusion—a conclusion that increasingly suggests that human greenhouse gas emissions are less important in driving climate change than commonly held.

It should be clear that he IPCC has outlived whatever usefulness it may ever have had.  It is time to disband this central climate “authority” and disperse the assessment of climate science to a broader, more diverse community.

The United Nations’ Intergovernmental Panel on Climate Change(IPCC) released its Fifth Assessment Report (AR5) to great fanfare. But more than ever before, there was also stinging criticism.

Much complaint was aimed at the IPCC’s defense of climate models— models which the latest observations of the earth’s climate evolution show to be inaccurate, or at least are strongly indicative that is the case.

There are two prominent and undeniable examples of the models’ insufficiencies:

1) Climate models overwhelming expected much more warming to have taken place over the past several decades than actually occurred; and

2) The sensitivity of the earth’s average temperature to increases in atmospheric greenhouse gas concentrations (such as carbon dioxide) averages some 60 percent greater in the IPCC’s climate models than it does in reality (according to a large and growing collection of evidence published in the scientific literature).

Had the IPCC addressed these model shortcomings head on, the flavor of their entire report would have been different. Instead of including projections for extreme climate changes as a result of continued human emissions of greenhouse gases resulting from our production of energy, the high-end projections would have featured relatively modest changes, and the low-end projections completely unremarkable.

To make the IPCC projections of the evolution of the earth’s average temperature better reflect the latest scientific estimates, it is necessary to adjust them downward by about 30% at the low end, about 50% at the high end, and about 40% in the middle.

What the IPCC Should Have Done

The figure below shows what happens when we apply such a correction (note we maintain some internal weather noise). The top panel shows the projections as portrayed by the IPCC in their just-released Fifth Assessment Report, and the lower panel shows what they pretty much would have looked like had the climate models used to make them better reflected the latest science. 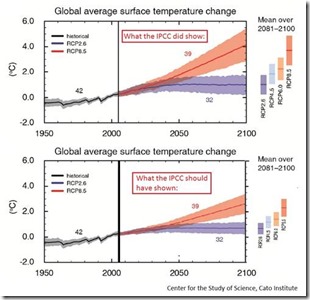 Figure 1. (Top) Temperature evolution from 1950 to 2100 as portrayed by the IPCC in its Fifth Assessment Report according to its worst case (red) and best case (blue) emissions scenarios (RCP8.5 and RC2.6, respectively). (Bottom) Temperature evolution from 1950 to 2100 from the same emission scenarios adjusted such that the equilibrium climate sensitivity values better matched the latest science.

The result of such adjustments is that the IPCC’s worst-case emissions scenario produces a global average temperature rise (from the 1986-2005 average) by the end of the century that has a centralized value of about 2.6°C, compared with a rise of 4.1°C given in the IPCC AR5. The more moderate (and probably more likely) emissions scenarios, once properly adjusted, produce a temperature rise by century’s end of only about 1.25°C (of which, about 0.15°C has already happened).

Since virtually all climate impacts are related to the change in the earth’s temperature, the smaller the future temperature increase, the small the resulting impacts. And another degree or so of temperature rise during the next 87 years is not going to lead to climate catastrophe.

Had the IPCC been more interested in reflecting the actual science rather than in preserving a quickly crumbling consensus (that human greenhouse gas emissions are leading to dangerous climate change that requires urgent action), its Fifth Assessment Report would have been a far different document, a much kinder and gentler one that the national news might have entirely ignored.

The above post is reproduced in large part from “What the IPCC Global Warming Projections Should Have Looked Like published October 4, 2013, at Cato@Liberty.

For further reading on the travails of the IPCC, please see at the Cato blog, Cato@Liberty:

New IPCC Report Will Be Internally Inconsistent and Misleading (September 26, 2013)