Part I yesterday established that wind electricity erodes the market share and utilization rates of our base-load fleet. But do governors and state legislators understood even that much?

I hope they do–or that they are coming to that understanding. Does wind electricity save some fuel? Yes. But that is all that it saves, while its cost impacts to electricity consumers extend beyond the direct costs of wind energy. It lowers the capacity factors of base-load generators which raises those generators’ per MWh breakeven price point to the extent those base-load generators have fixed costs.

Existing generators often have lower fixed costs than new ones due to the fact that their initial construction debt is partially or fully paid off. And it is true that new combined-cycle gas (CC Gas) generators have lower fixed costs than new coal or new nuclear plants. We might deduce from these points that wind electricity’s indirect costs undermine the economics of new coal and nuclear plants to a greater degree than for new CC Gas or some older existing base-load capable plants.

But it is also important to recognize that the cost to produce a unit of electricity from CC Gas units will always be lower over time without wind on the system than with – unless the CC Gas unit has no fixed costs at all and unless/until the ongoing price of natural gas more than doubles. If it does, then we would have been wiser to support constructing more nuclear power plants as long as their capacity factors were allowed to remain as high as possible – something building more wind capacity threatens to prevent.

It can be argued that wind requires us to depend more on natural gas generation long term, but also increases the cost of electricity from that natural gas generation. Wind also increases the system-wide average cost of electricity unless wind energy’s full cost is less than the sum of the cost of the fuel it saves plus the incremental costs it imposes on the base-load capable fleet.

Even more difficult to quantify–but potentially more important–is the artificial suppression effect production-subsidized wind has on wholesale electricity market clearing prices. For our dispatchable fleet of generators, price suppression can easily lead to gross margin evaporation. If such market conditions persist without capacity market or private PPA support, the owners/operators of important, previously-low-cost-electricity generators will make decisions not to reinvest in emissions compliance equipment, but instead shutter or retire.

The U.S. coal fired fleet faces such a circumstance now with Federal EPA MACT and MATS regulation compliance deadlines this spring. Many units that were competitive and profitable market participants will retire in May. The lost capacity from these retiring units will need to be replaced by new dispatchable units that have both higher fixed and variable operating costs.

The components of fixed and variable cost of dispatchable electricity generators

Fixed costs include but are not limited to land, construction and equipment costs, bank interest and insurance paid on money borrowed to purchase the former, facility upkeep and the cost of full-time employees.  The more units produced and sold in a year, the lower the fixed costs per unit sold.

The other primary kinds of costs are “variable costs.”  These are costs that are only incurred with each additional unit of energy produced.  Variable costs include the cost of the fuel, the cost of maintaining, repairing and replacing components of the equipment that wear out over time as that equipment is used, and the cost of any part-time employees that are only paid when electricity is being produced.

An unusual but important figure/ground perspective

Seemingly paradoxically, variable costs are the “fixed” costs per unit of electricity produced, and fixed costs per MWh “vary” according to a plant’s capacity factor (utilization rate).

Load following and peaking resources by definition sell less electricity annually (as a percentage of their nameplate capacity) than do base-load resources, and so any fixed costs (such as the mortgage payment) become a higher cost per unit of electricity produced and sold.  For that reason, load-following/peaker plants are usually designed and constructed on a very tight capital budget. As any generating unit is forecast to produce less and less electricity annually, investment in high fuel efficiency or emissions mitigation equipment becomes less and less practical.  An extreme example makes this obvious:

Let’s say fuel costs $35 to $50 per MWh depending on a planned new power plant’s fuel efficiency.  The plant would cost $500,000 per nameplate MW for a high heat rate (low fuel efficiency) model and $1,000,000 per MW for the most fuel efficient model.  If the developer expected to sell 500 MWh of electricity per year, mortgage cost per MWh produced would range between $100 and $200/MWh.  Which type of power plant does the developer choose to build if he can sell only 500 MWh per year per MW of installed capacity?

Continuing the example above, now suppose the developer expected to be able to sell 5,000 MWh per year per MW of plant capacity, lowering the mortgage payment obligation per unit of electricity sold by tenfold – to a range of $10 per MWh for the less fuel efficient design to $20 per MWh for the high efficiency design.

The default risk associated with high-fixed-cost power plant investments (when required) should be mitigated – by carefully managing supply and competition, thereby ensuring high utilization rates for our existing and any required future base-load resources

It is hard for me as a strong believer in free markets to make that statement. But I do believe it is true. I have done research and derivations to examine this concept, but those are the property of the Institute for Energy Research who contracted me to do examine the issue and who has not yet released the associated report.

Continuing with the example, as long as the base-load-capable, high-fixed-cost plant can continue – over the term of its mortgage – to sell the 5,000 MWh/yr/MW it expected to when it was built, electricity from that plant remains cheaper for its customers than if the developer had opted for the less expensive, but less fuel efficient design.  But if the plant is eventually used a lot less than expected it will either face bankruptcy and possible closure, or customers will have to pay more for the electricity it produces.

The less electricity demand varies day to night and season to season, the more base-load plants could be build and the less load-following plants would be needed.  In that case electricity could become both cleaner and cheaper.  Society (individuals and businesses) however, don’t want to be forced to operate in the middle of the night – especially on Saturdays and or Sundays.

Nor does society wish to be too hot on summer weekdays or too cold on winter nights, nor operate manufacturing facilities less just because air-conditioners are using a lot of electricity on hot summer weekday afternoons. For these reasons the electricity system has evolved to serve the vagaries of human demand instead of human comfort and productivity being dictated (and sacrificed) to serve a rigid electricity system where lowest cost and lowest emissions trump all else.  One might say there is a good reason we operate within the paradigm that “the electricity system serves people and not vise-versa.”

To finish the example from above, let us now say the developer takes the gamble that they will be able to sell at least 5,000 MWhs per year per MW of capacity built – over the 30 year term of the mortgage they had to take out to build the more efficient and lower emitting plant. As described, problems will arise if/when actual sales volumes fall off (for any number of reasons) during the term of the mortgage.  Here are some primary reasons sales might fall off:

1) Too many new plants are constructed over time compared to society’s increase in electricity demand over that same time.

2) Too few older plants retire over time compared to a high number of new plants built relative to increase in society’s increase in electricity demand over that same time.

3) Government policies encourage a third kind of power plant (not base-load and not load-following) which changes the ratio of base-load demand to load-following demand.  Such is the case with wind electricity. 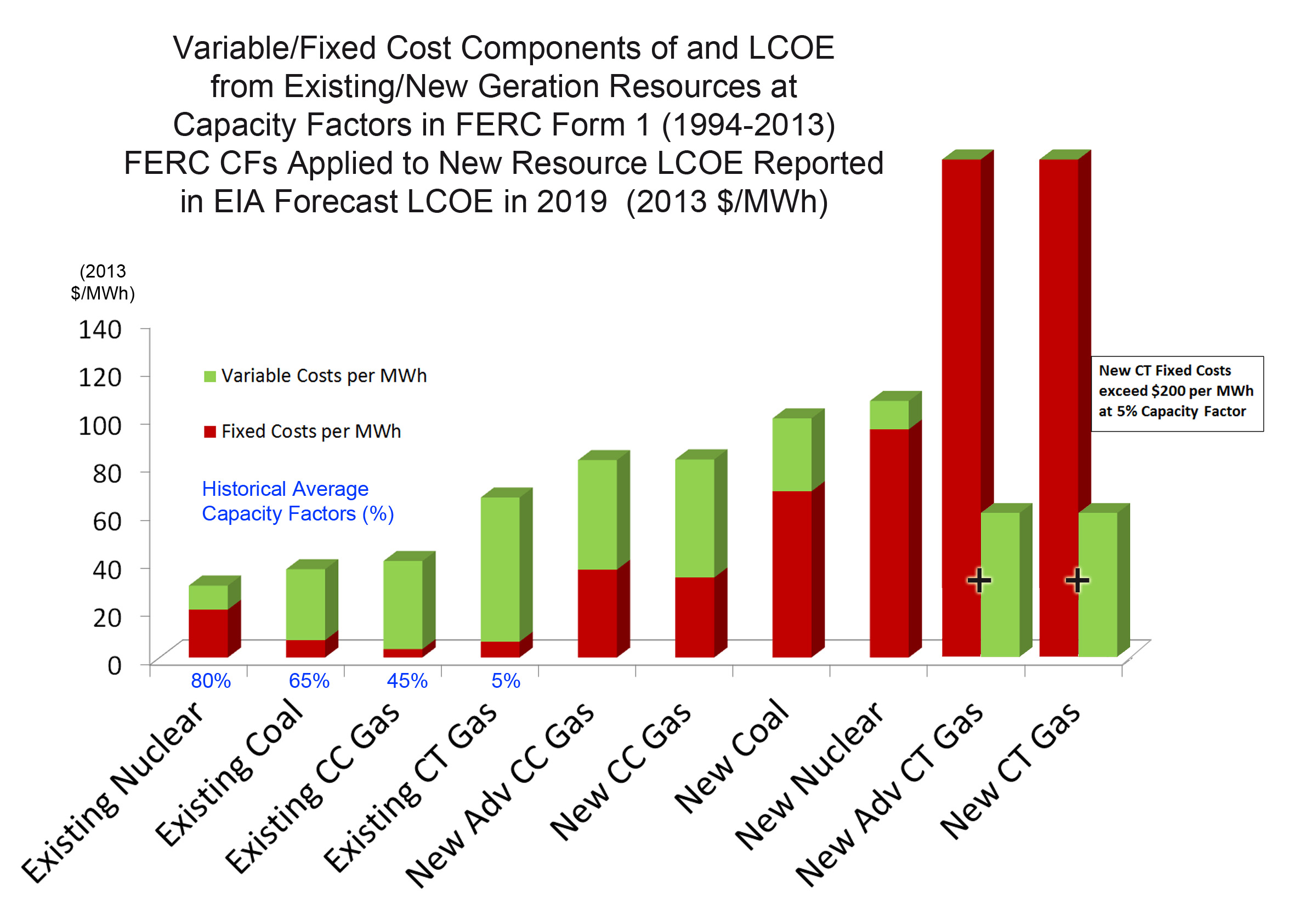 6) Furthermore, major capital investment in power plants has become an ongoing process rather than a one-time construction event. This is in large part due to the succession of new environmental regulations over time. The utilization rate story takes on even greater importance as a result.

This discourse leads to recognition of the need for either A) a market mechanism or B) a regulatory structure – which ensures for the benefit of ratepayers that investors do not proceed to construct more power plants than are reasonably expected to be needed in the foreseeable future.

A central question in policy today is whether a market mechanism can be established which works as well as or better than a well-informed and prudent supply management regulatory system. Interstate competition for commercial activity, job creation and flows of wealth all cloud the issue and obstruct clarity about electricity policy and regulatory decisions.