In June 2004, EPA released a study examining the safety and performance of an energy technology known as hydraulic fracturing – particularly in the context of its use in coalbed methane wells, from which nearly 2 trillion cubic feet of natural gas were produced in 2008 (latest numbers).

The goal of the study was simple: Determine whether the fracturing of coalbed wells had the potential to adversely affect the quality and composition of underground sources of drinking water (USDW). EPA’s methodology: Research more than 200 peer-reviewed publications, and interview almost 100 different state regulators, environmentalists, and industry reps. EPA’s conclusion: No evidence linking the deployment of fracturing technology to drinking water contamination. Of course, since the study was released during the tenure of the previous president, its findings were rejected out-of-hand by environmentalists – never mind that the study itself was initiated during the Clinton administration by then-EPA administrator Carol Browner.

Interestingly, Ms. Browner crops up a number of times in the looking back at the history of EPA involvement with hydraulic fracturing – and not necessarily in ways you’d expect. Here she is in 1995, for example, blinding a plaintiff’s attorney with some science in explaining the concept of geological separation, and why that’s an important part in assessing the safety of the fracturing process:

There is no evidence that the hydraulic fracturing at issue has resulted in any contamination or endangerment of underground sources of drinking water (USDW). … Moreover, given the horizontal and vertical distance between the drinking water well and the closest methane production wells, the possibility of contamination of endangerment of USDWs in the area is extremely remote. (emphasis added)

Why is any of this important? Quite simply, if you’re looking to prove that fracturing activities contaminate groundwater – notwithstanding 60 years of evidence suggesting the opposite — first you need to prove the formations being fractured are communicating with the formations holding that groundwater.

Problem is, if you can’t prove it’s happening in coalbed methane formations (which reside only hundreds of feet from the water table), the job of proving it’s happening in shale formations (which reside several thousands of feet from the water table) becomes all the more difficult to do. And shale, after all, is the big prize here. Remember how coalbeds produced 2 trillion cubic feet of natural gas in 2008 nationwide? According to one report, natural gas development from shale could yield 5 trillion cubic feet by 2020. Not nationwide; that’s in a single state (PA).

Of course, plenty of folks have plenty of reasons to oppose the availability of reliable, low-cost energy – and they’re not about to let a silly thing like science to get in the way of tying the use of fracturing to the mass contamination of groundwater. A documentary airing on HBO right now called GasLand attempts to make that case in several scenes of the film – describing the process as a “blast” that induces a “mini-earthquake,” tearing apart the subsurface rock and creating massive chasms connecting formations below with much shallower strata carrying drinking water above.

Of course, serious geologists have known since time immemorial that hydraulic fracturing doesn’t (and can’t) contaminate USDWs – a function of the fact that the two strata (energy and drinking water) are separated by thousands of feet underground, and millions of tons of impermeable rock. But thanks to the good folks over at Pinnacle Technologies, we now have some solid data to express this separation in quantitative terms.

As reported by Pinnacle general manager Kevin Fisher in July’s edition of the American Oil & Gas Reporter, the following graphs plot actual field data from tens of thousands of fracturing operations conducted over the past decade – this first one in the Barnett Shale formation in Texas, which shows quite clearly that even the most shallow fissures created through the fracturing process remain separated from the water table by more than 3,500 feet: 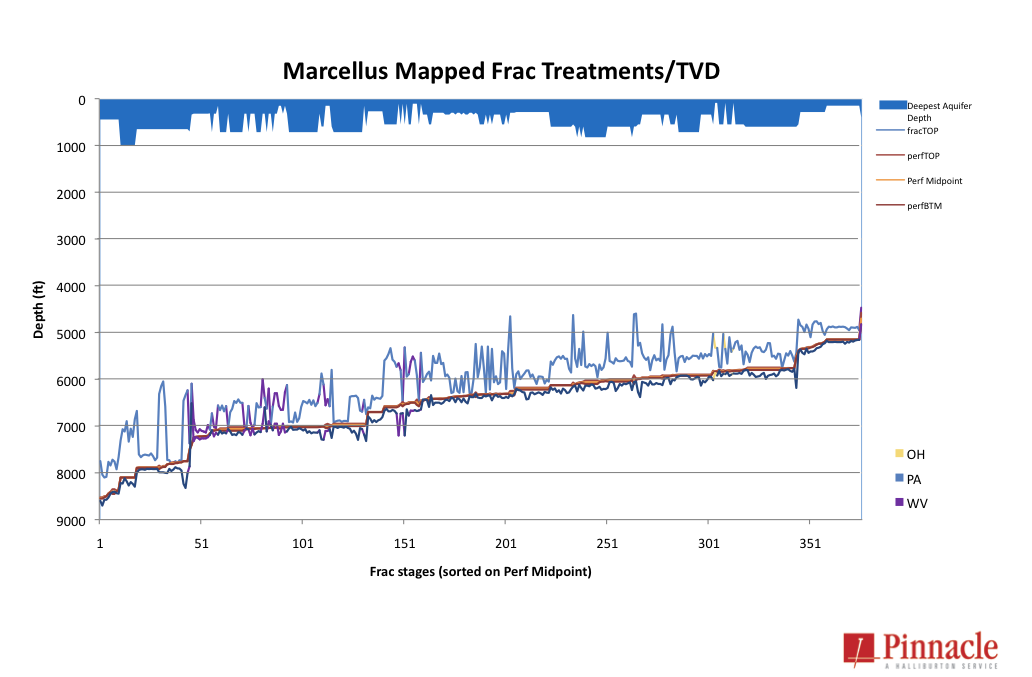 But that’s just the Barnett, right? Everyone knows there’s no problem down in the Metroplex. Isn’t the real area of concern the Mighty Marcellus – where activists continue to claim that gas, chemicals, salt, metals, and Lord knows what else regularly get dredged up from the depths and beamed into every well, sink and stream in sight? Well, Pinnacle ran the numbers on the Marcellus as well, and although the data set isn’t quite as robust as what you’d find in the Barnett (remember: we’ve been developing that one a bit longer), the story in Pennsylvania, West Virginia and Ohio is remarkably similar. To wit: 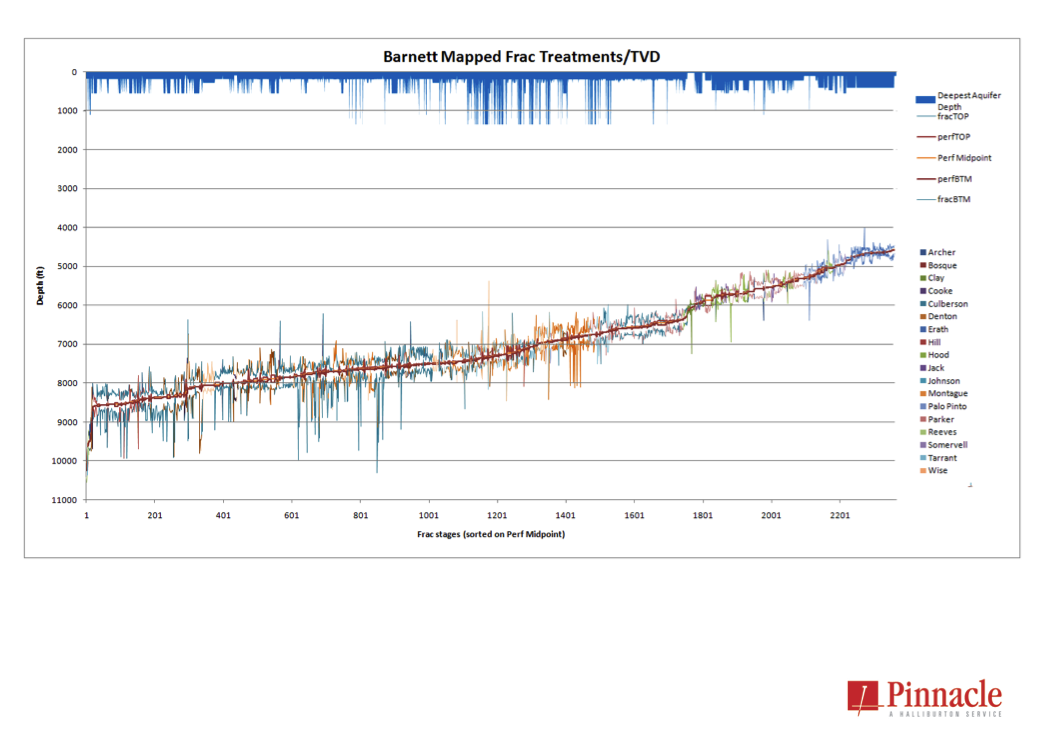 Here we see an even greater separation between fractures in the underlying rock and sources of potable water above – with the closest the two shall meet clocking in at roughly 4,300 feet.

In other words, the deepest formations holding drinking water and the most shallow depth at which you’ll find a fracture in the Marcellus Shale are still separated by the equivalent of three-and-a-half Empire State Buildings – or three Petronas Towers, for our Malaysian friends. And by the way: they’re not exactly separated by air either. Between the two, you’ll find millions of tons of solid, impermeable rock – rock that has for literally hundreds of millions of years acted as an immutable barrier preventing salty water below from communicating with fresh water above.

But just to be sure we got this right, we sent these graphs and data up to Williamsville, N.Y. so that Ph.D. geologist Michael P. Joy might give them a gander and share some technical insights into what makes the phenomenon possible. Below is a (small) excerpt from the email he sent us in reply:

The hydraulic fracturing process creates fractures that are very small, usually an 1/8th inch or less in width. There is not enough pressure that could be exerted on the column of water to create a fracture matrix long enough to reach anywhere close to near surface aquifers. … The gas and water in these deep shale formations exist in hydrostatic equilibrium; the pressure acting down on the formation fluid is equal to the pressure being exerted from the bottom upward and the formation fluids act under the immutable laws of physics and stay in place.

Right. What he said.

Chris Tucker is a spokesman for Energy In Depth, an outreach and education campaign started by the Independent Petroleum Association of America (IPAA) in 2008.