“After years of debate there is still disagreement and uncertainty regarding appropriate safety setback distances. This uncertainty has benefited the wind industry. Thousands of turbines are erected throughout the U.S. that are dangerously close to where people live.”

Last month, Ohio infuriated wind proponents by passing Senate bill 310, a bill that delays the state’s renewable electricity standard for two years and eliminates the requirement that half of the renewables mandate be met with in-state resources.

Within days of SB310 passing, Ohio Governor John Kasich approved a change to the safety setback distances for wind turbines. Under the new law, setbacks will now be measured at the property line of the nearest adjacent property as opposed to the wall of a nearby home. In practice, this will require minimum distances of at least 1,300 feet from property lines to each turbine base.

Wind developers and Ohio’s media cried foul over due process claiming the legislature gave no warning of the setback rule change or opportunity for testimony. They insisted the provision was ‘anti-wind’ driven by coal and oil interests intent on destroying the economics of large-scale wind and called on the governor to veto the change.

For decades, the wind industry has advanced the notion that these massive spinning structures can safely be erected a few hundred feet from where people live and gather.

The industry’s preferred setback has been 1.1x to 1.5x the height of the tower (including the blade) which was derived from the fall-zone of the tower. We saw variations on this over the years beginning in California, that measured as much as 3-4x the total tower height. In general, there was no consideration in the setback distances for noise nor did the 1.1 to 1.5x setback adequately address ice/blade throw.

In 2006, the California Energy Commission examined setback standards in the state. The conclusion of the study called for a  setback distance just shy of 1000 feet to protect against turbine failure. [1] This distance was less conservative than what Vestas had recommended (although Vestas has since eliminated this standard from its documentation and claims it is not involved in siting decisions.)

Simple math  describing motion shows that ice or debris from a 100-foot long blade can be thrown nearly 1700 feet from the base of the turbine. [2] Turbine manufacture, Vestas, has reported debris from its V90 turbine being thrown 1,600 feet.

In assessing risk to the public, the wind industry typically assumes a probabilistic perspective where they examine the probability of failure and the chances of an individual being present at the time of the event. If the probabilistic assessment assumes that people are infrequently present when a blade might be thrown, for example, then it’s not surprising that the industry reports a low risk of harm even at close range.

According to William Palmer, a utility reliability engineer responsible for analyzing the impact on public safety at a nuclear facility in Ontario Canada, deterministic risk assessments provide a more accurate understanding  of risk and necessary mitigation measures. Deterministic risk assessments require analysts to assume that a person is permanently standing at the limit of risk (edge of the safety zone), and are considered to be there during the accident. If people are nearby all the time, their risk of being hurt is high.

Safety cannot take a back seat to statistical probabilities but that’s exactly what communities have accepted from the wind industry for years.

What About Ice Throw?

Project developers often represent that ice throw is unlikely to occur because ice generally melts gradually and slips off the blade and down to the ground below. Iberdrola Renewables made this claim in 2010 prior to receiving approval to construct its Groton Wind facility in New Hampshire. However, according to Iberdrola’s Emergency Plan written for Groton Wind employees and released this year, “shedding ice may be thrown a significant distance as a result of the rotor spinning or wind blowing the ice fragments.”

GE Wind states that rotating turbine blades may propel ice fragments up to several hundred meters if conditions are right depending on turbine dimensions, rotational speed and many other potential factors.

As more turbines are sited in cold climates, the wind industry has considered safety distances based on the level of allowable risk. [3] The figure below maps distances from the turbines based on the estimated annual icing events at the project site and degree of risk. In colder climates, icing can occur during non-winter months. 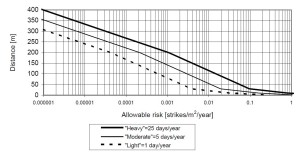 Very little public information is available that documents the frequency of ice throw and the distances flung from the turbines. Surveys have been conducted of large project operators in an effort to track the size and distance of ice fragments being thrown but the results are inconclusive as there is no way to assess how well the area around the turbines was searched, especially at great distances from the towers. One operator of a wind installation admitted large turbines will throw a four hundred pound chunk of ice one thousand feet.

After years of debate there is still disagreement and uncertainty regarding appropriate safety setback distances. This uncertainty has benefited the wind industry. Thousands of turbines are erected throughout the U.S. that are dangerously close to where people live.

In the last five-to-six years, communities have adopted setbacks at or greater than the distance codified under Ohio law. More modern ordinances include two setback protections. The first protects property owners from ice/debris flying off the turbines. This ranges from 1300 feet to 1 mile or more away. The second setback distance is implied based on noise limits that cannot be exceeded either at the property line or the wall of an occupied building. If the noise standards are correctly applied, turbines may be erected 1.25-1.5 (or more) miles from the property line/building.

According to Mr. Palmer, the goal of public-safety risk assessment is to ensure that we do not impose risks on unsuspecting members of the public. We agree!

[1] Noise and ice were not considered.

[2] Distance is dependent on the length of the blade, its angle at the time of the incident, the speed of rotation and the vertical distance from the ground.