It is the irony of ironies. Taxpayer and ratepayer-forced subsidies for utility-scale windpower also subsidizes emissions of carbon dioxide (CO2). The same would be true under a national renewable portfolio standard as proposed in pending federal legislation.

Such is a vivid demonstration of the perils of unintended consequences and, to borrow a phrase, “an inconvenient truth” about wind power.

My recent four-part Wind Integration Realities reviewed two new studies, based on actual experience, that show fossil fuel consumption and CO2 emissions areincreased, not reduced, with the introduction of wind. Their results were compared as well as to those of my fossil fuel and CO2 emissions calculator for the same conditions. The brief summary in Part IV of the series is expanded upon here for clarity of this game-changing argument.

In general, the studies show that as wind penetration increases, the effect on fossil fuel and CO2 emissions worsens. Specifically, at wind penetrations of about 3% (as is the case in the Netherlands), the savings are zero. At 5-6% (as for Colorado and Texas) the “savings” become negative, that is, emissions actually increase due to the presence of wind power.

Details of the Three Jurisdictions Studied

The two studies, covering three jurisdictions, the Netherlands, Colorado and Texas, provide a good range of electricity system size and fuel mix, and wind implementation, penetration and capacity factor. In the Netherlands gas predominates, whereas in Colorado coal does. Texas shows approximately equal contribution between the two, with gas exceeding coal by about 30% when CHP (Combined Heat and Power) plants are included.

Table 1 is an expanded version of the table provided in Part IV, summarizing the important details and the results of the three analytical approaches used, which are:

· The le Pair and de Groot study for the Netherlands

· The Bentek Energy study for Colorado and Texas

· The results from my calculator for these jurisdictions

Table 1 – Summary of the Three Approaches Analyzed in this Series 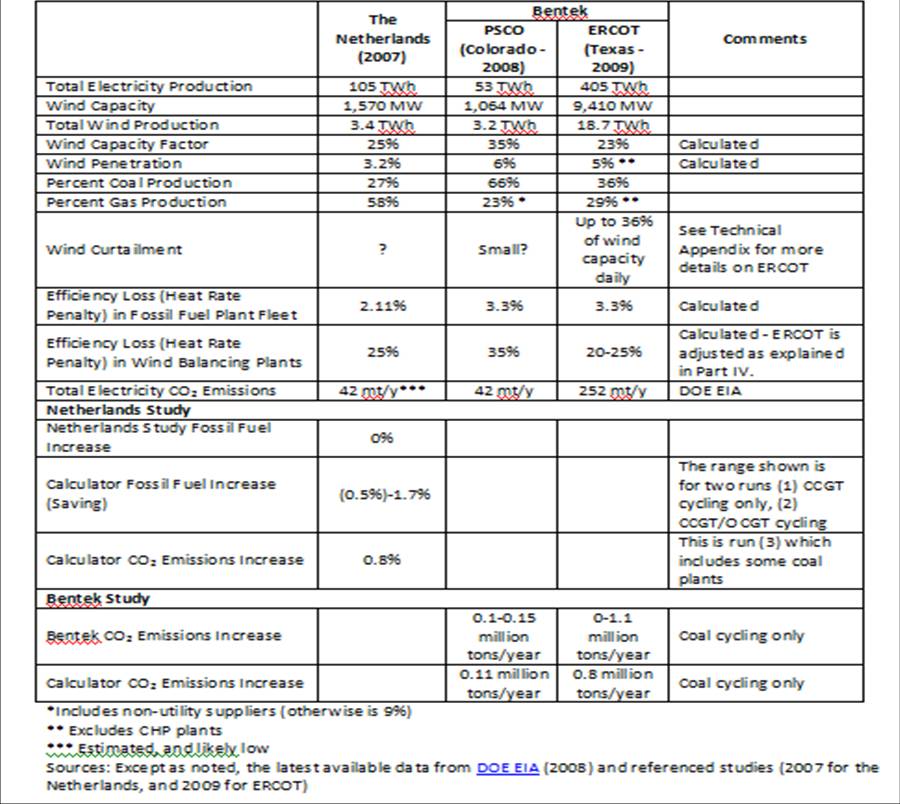 Figure 1 shows the CO2 emissions savings based on two approaches to the replacement of a portion of the coal plants in all three jurisdictions.

1. Introduce wind plants, which produce no CO2 emissions at the point of wind electricity generation.

2. Do not introduce wind and use efficient gas plants (CCGT) to replace coal production. 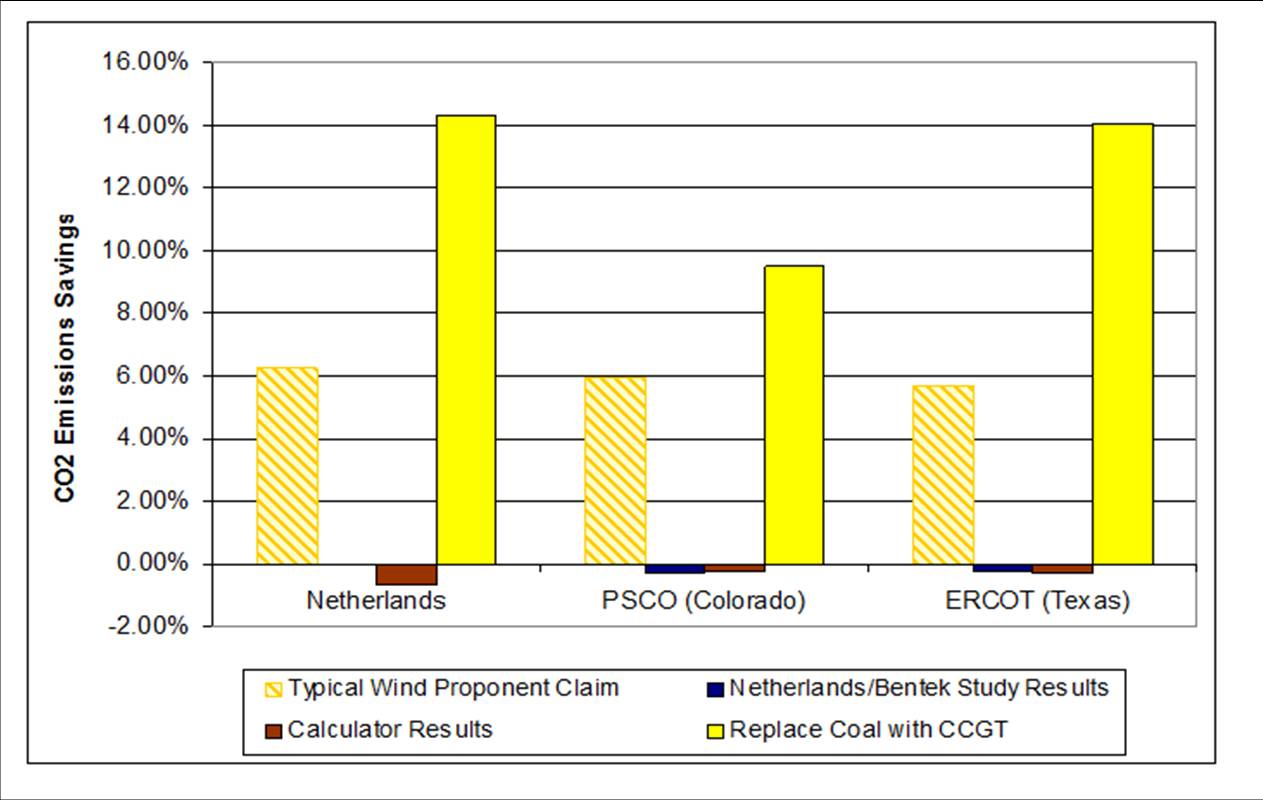 The four columns in each case represent:

· Column One – The typical wind proponent claim Their view is that the average wind production over time replaces the CO2 emissions from the same production of the coal plant(s). This view ignores the loss in efficiency (resulting in increased fossil fuel consumption and CO2 emissions) for the plants that are frequently cycled up and down to mirror wind’s highly variable, real-time production. It is purposely shown as somewhat washed out because it is not realizable. Column two shows the reality. It is coincidental that all are at about 6% of total emissions and is due to the combination of the specific wind capacity factors and the proportion of coal and wind in each jurisdiction.

· Column Two – Study results This shows the results based on actual experience in the three jurisdictions studied. The Netherlands result is zero. The mid-points of the ranges for PSCO and ERCOT were used.

· Column Four – High efficiency gas plants only This shows the result of not implementing wind and using high efficiency gas plants to replace the same coal production. The variation in percentage reductions in column four is due to the underlying proportion of coal and gas. Colorado has the highest reliance on coal and CO2 emissions are greater in proportion to the other two. As the result, the same level of reduction is less as a percentage.

No costs of CO2 mitigation are calculated because at the wind penetrations studied (greater than 3%) there is no reduction.

The two studies and calculator results demonstrate that claimed CO2 emissions are not reduced, but are increased, with the introduction of wind plants, and a straight substitution of gas for coal production is a far superior strategy. This is by no means the last word, as all three analysis approaches call for comprehensive and objective studies, based on complete information, to confirm these findings.

The Netherlands study shows that the point where CO2 emissions overall become negative occurs at about 2% efficiency reduction across the fossil fuel fleet and corresponds to about 3% wind penetration. This is shown in Figure 2 which is reproduced from the Netherlands study. ?F is the change in fossil fuel consumption and ?R is the percent reduction in efficiency of the total fossil fuel fleet. [Here ? means the Greek letter delta meaning “change in”] 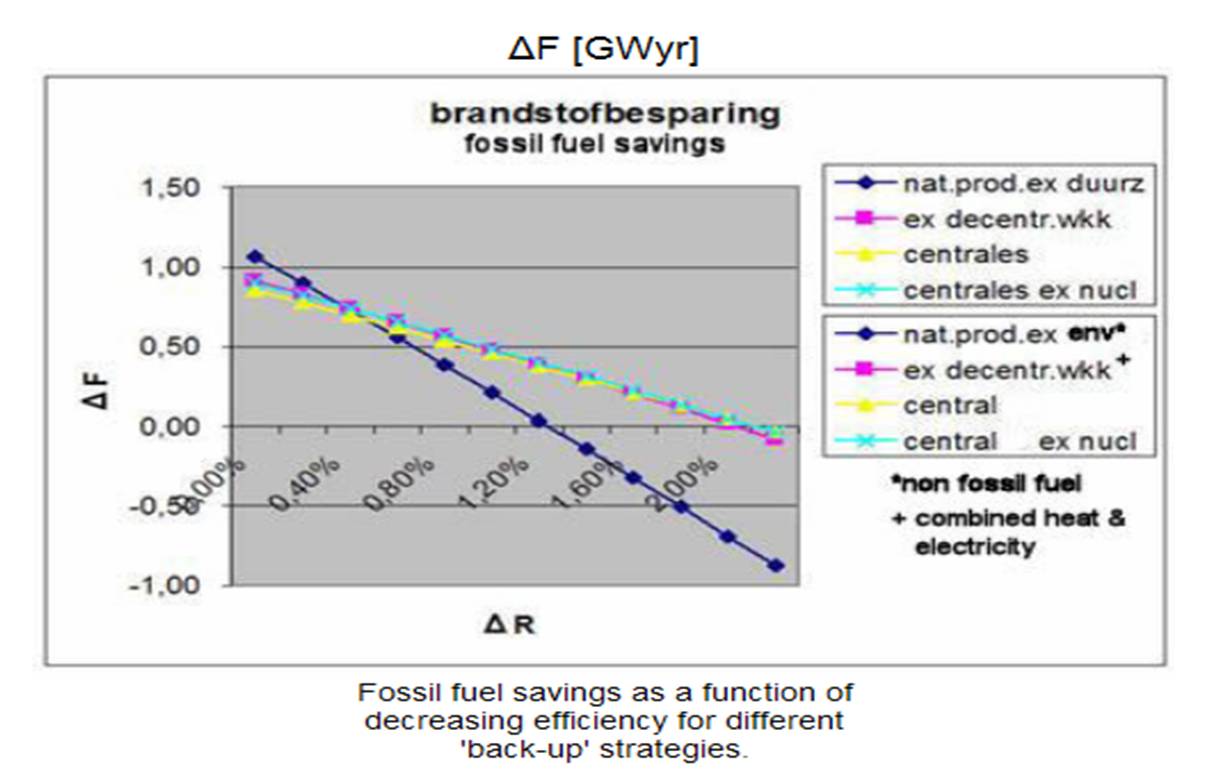 If the wind proponents are right and ?R is zero, then ?F is approximately 1.00 GWy. Therefore the fossil fuel consumption of 18.45 GWy as shown in Table 2 of the Netherlands study would be 18.45-1.00 = 17.45 GWy. That is to say, in theory the introduction of wind saves 1.00 GWy, but at ?R of 2% gives this back due to the inefficient operation of the fossil fuel plants. Therefore the typical wind proponent claim is that the 1.00 GWy would be saved and the percentage saving is about 1.00/17.45, or 5.7%. Compare this to the calculated wind proponent claim of 6.3% for the Netherlands in Figure 1.

However theoretically possible, this has been demonstrated by Colorado and Texas experience not to be the case. Further, increases in the efficiency loss for the fossil fuel fleet above 2% will result in increased fossil fuel consumption (negative ?F), and hence CO2 emissions, again as shown by the Colorado and Texas experience. Such increases in efficiency loss could be caused by:

On the other hand decreases in efficiency loss could be caused by increased wind curtailment.

None of these considerations is supportive of the deployment of utility-scale wind plants, except in very small amounts, for whatever purpose that might serve.

Here is more detailed information on ERCOT wind curtailment as reported by the NREL:

By mid-2009 (assuming the average of the year-end wind installations for 2008 and 2009) wind curtailment appears to be about 6-12% daily (500/8,420 and 1,000/8,420), and at times up to 36% daily (3,000/8,420). As wind curtailment is already widely used in Germany, and Texas has reached the same wind penetration, this is not surprising, and illustrates another “inconvenient truth” about utility-scale wind power. It is not clear why more curtailment is not reported for Colorado, given its stronger wind regime.