“Analyses of wind impact on emissions do not take the impact of the highly variable and unreliable wind generation fully into account, especially in short term intervals, and can be discounted as not providing conclusive results.”

This three part series will illustrate the problems in properly evaluating the impact of unstable generation sources (wind and solar) in electricity systems. It will be seen that the complexity involved makes it virtually impossible to analyze all the necessary factors, and the use of sophisticated mathematics, especially statistical approaches, cannot compensate for this. Further complicating this, any analysis relying on published fuel consumption or emissions is made even more inconclusive because of the questionable nature of this information.

A basic problem is the erratic behaviour of wind in the short term (a few minutes or less) and unreliable in the longer term (hours and days). This is the same for solar. As a result they are not useful by themselves and must be coupled with reliable, dispatchable generation plants to mitigate this. So they cannot be put in the same category, or compared in any meaningful way, with reliable, dispatchable generation technologies, including costs, effect on emissions, and contribution to electricity supply and system reliability.

Part I sets the stage with basic information as context for more detail in Part II tomorrow. Part III addresses the issues in (1) the published information available for analysis, and (2) the use of sophisticated mathematics in an attempt to address some of the complexities involved.

In summary, analyses of wind impact on emissions do not take the impact of the highly variable and unreliable wind generation fully into account, especially in the short term intervals, and can be discounted as not providing conclusive results.

This series of posts is intended as a caution for those attempting to analyze wind impacts on electricity systems, especially those arriving at, or implying, conclusive results, and to assist readers in assessing them. There is no intent to suggest that existing analyses are somewhat accurate but can be made more precise. Regardless of their precision, I suggest they are not even close to being accurate.

The Bonneville Power Administration (BPA) provides generation and load information at 5 minute intervals for its balancing authority area in the U.S. Pacific Northwest by major fuel category and load. The information available for the first six months of 2015 is analyzed. Graphics are used for illustrative purposes and based only on January to March due to space limitations.

Figure 1 shows generation by the major fuels. As opposed to fuel consumption or emissions, reported electricity production information can be taken as reasonably reflecting reality. 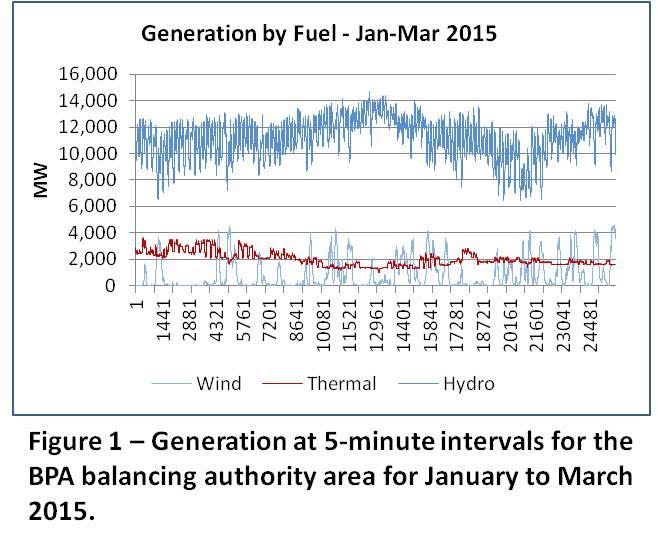 Figures 2 and 3 show wind and the two major demand elements, load and interchange for the period January to March, 2015. Interchange is net exports, and in BPA’s case is very large compared to most jurisdictions. 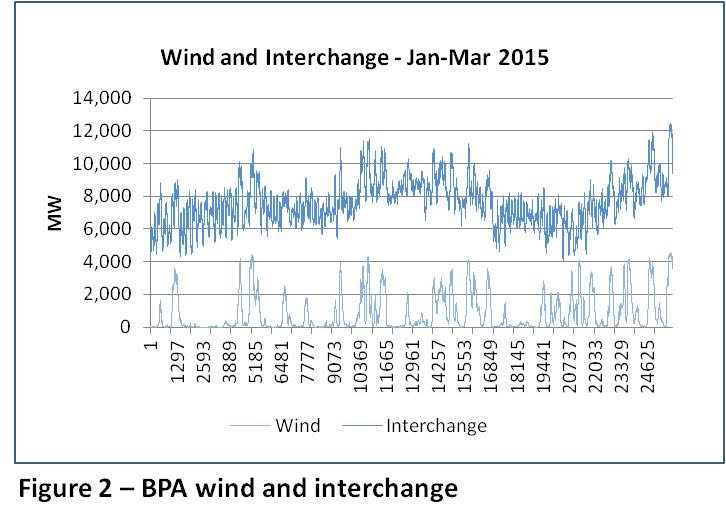 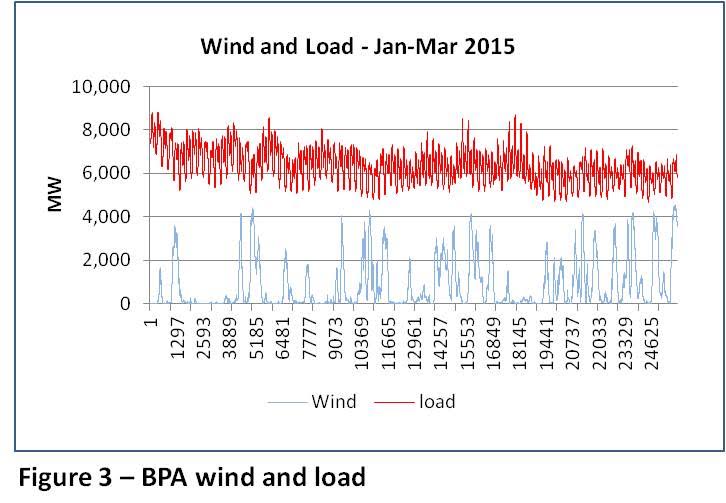 Comments on Figures 2 and 3:

Many analyses rely on published time intervals that are too long to capture wind short-term fluctuations. The sample in Figure 4 makes a start at illustrating the shortcomings of this with wind production (points 8,715-8,786 on Figure 1) for about 6 hours at 5-minute measurement intervals versus 15, 30 and 60 minute intervals. 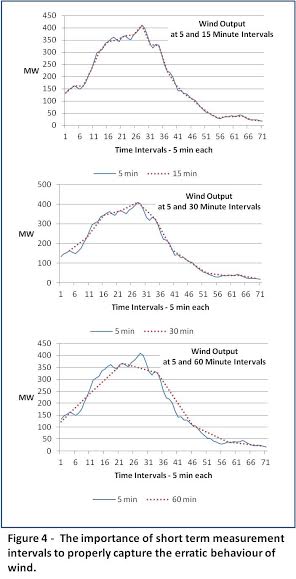 Range of Variation of Net Load

Combining two ‘random’ series of events in real time, results in another random series with a larger variation than each alone. In most electricity systems this would chiefly be domestic load and wind. However in the case of BPA, another major ‘random’ series of events is the notably large interchange component, which roughly equals the domestic load component, and increases the complexity of any analysis for BPA specifically. However, in almost all other cases interchange will not be as large. However, useful conclusions can be made here about the effect of the combination of wind and load alone that are generally applicable.

To begin, Table 1 shows the ranges for these components and the net effect of the combination.

Table 1 – Ranges in Variability for Load, Wind, and Load minus Wind

Shore term measurement intervals of a few minutes or less are necessary to properly assess wind impact. The combination of load and wind, or net load, is what must be balanced by other generation plants and is more important in assessing wind impact than wind generation alone.

Analyses, including this series, typically assume wind balancing is at the highest level in a jurisdiction, but balancing is likely done regionally depending on grid topography, which means any smoothing over distance likely understates wind impact.

So far, we have seen some of the basic issues in properly analysing wind performance, but these are only ‘the tip of the iceberg’.

[1] BPA facts (2014). http://www.bpa.gov/news/pubs/GeneralPublications/gi-BPA-Facts.pdf . This sum of the reported firm capacity is about 24 GW. A typical average annual production would be about 50% of this, which is roughly the reported average level for the total BPA load, including both domestic load and interchange. At the maximum daily peak load, 100 per cent of the capacity (including reserves) is required. The BPA also reports 2 GW of wind as firm, but with a total capacity of about 5 GW this is so questionable that it has been ignored.