Yesteryear’s climate extremes are today’s climate normals. Yet we are largely oblivious and better off. A hundred years from now the same will be true. Ho hum….

But not everyone thinks this way. Take NASA’s James Hansen for example.

Hansen has recently published a prominent paper (in the Proceedings of the National Academy of Sciences, PNAS) and placed a prominent op-ed (in the Washington Post) that are aimed at raising the public’s awareness of the impacts of climate change, both now and in the future. In a rather candid admission for a scientific paper (and one which in most cases would have resulted in an immediate rejection), Hansen (and co-authors) proclaim that “…we were motivated in this research by an objective to expose effects of human-made global warming as soon as possible…” To drive the point home further, Hansen’s op-ed was headlined “Climate change is here — and worse than we thought.”

What Hansen wants us to know, is that as temperatures increase, temperatures at the high end of the scale that were once statistically very rare (i.e., extreme) will become considerably less rare.

However, Hansen is of the opinion that once this knowledge becomes widely known and associated with human greenhouse gas emissions (one of the many ways that human activity can alter the climate), that the majority of people will hasten to support actions (legislative, regulative) aimed at curtailing such emissions.

For one thing, it is not clear to me that warmer (and higher atmospheric CO2 levels) isn’t in many ways better. Robert Murphy pointed to recent economic analyses that found this to be the case, at least for some additional warming. And there are plenty of other potential benefits.

For another, as Roger Pielke Jr. points out, there is a lot of evidence that folks who already accept that human activities are impacting the climate still don’t clamor for actions to mitigate that influence—at least very expensive ones.

And thirdly, a changing climate is quickly and thoroughly absorbed in everyday life such that no one really cares about how it used to be and simply adjusts to how it is.

In fact, the next generation usually rolls their eyes at the weather stories of the previous. The Christmas morning “when I was a kid the snow used to reach up to my eyeballs” stories are met more often with, “whatever, Grandpa, now can I go outside and play my new soccerball,” than “Jeez, Grandpa, I’d be willing to give up some of my gifts to higher taxes and an effort to try to get back to that kind of weather.” The new generation just accepts the weather for what it is as climate changes meld with daily routines. What was formally a big deal, no longer is even much of a bother.

Nowhere is this more evident than in the statistics of heat-related mortality. This is a point that I belabor in these pages. As temperatures rise heat-related mortality rates decline. Whatever problems were once associated with “extremes” have been overcome through adaptation (in its many forms).

And while this phenomenon has been repeatedly demonstrated (including in my own research), it goes virtually ignored. Overwhelmingly, evidence suggests that rising temperatures will lower heat-related mortality rates, but the writers of impact assessments, the proposers of legislation, the crafters of regulations, and professional and amateur worriers alike always make an appeal to the contrary. And mislead in doing so.

The decline in heat-related mortality is just one specific example of the overall human adaptive response to a warming climate. Most adaptations occur generally, without undue effort, and largely without a second thought.

In his PNAS paper, Hansen defines “extreme” high temperatures as being at least three standard deviations above the average—an event which should only occur about 0.13% of the time based on a normal (bell-shaped) distribution. Hansen points out that as the average temperature increases, the distribution of observed temperatures will shift to the right (toward higher temperatures), with the consequence that the occurrence of extremes will increase dramatically when judged by the old distribution. Figure 1 shows this. 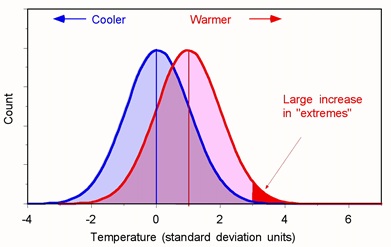 Let’s look at the numbers in Figure 1 a bit more closely. I’ll use an example of climate change where the average temperature increases by an amount equal to the value of one standard deviation (a standard deviation is a measure of variability such that two-thirds of all observations fall within one standard deviation of the average of all observations). In this new, warmer climate (with a variability the same as the old, cooler climate) the occurrence of events exceeding three standard deviations above the old average increases by about 17.5 times. Specifically, a high temperature event that used to occur only about 0.13% of the time, now occurs about 2.28% of the time. Or, if you wanted to add a more attention-getting spin, you could say that the occurrence of extreme events has increased by over an order of magnitude.

Temperatures in the real world over the past 50 years or so have behaved somewhat like my example.

Here is how Hansen et al. describe their findings:

The most important change…is the appearance of a new category of extremely hot summer anomalies, with mean temperature at least three standard deviations greater than climatology. These extreme temperatures were practically absent in the period of climatology, covering only a few tenths of one percent of the land area, but they are occurring over about 10% of global land area in recent years. The increase of these extreme anomalies, by more than an order of magnitude, implies that we can say with a high degree of confidence that events such as the extreme summer heat in the Moscow region in 2010 and Texas in 2011 were a consequence of global warming.

Several commentators around the web have taken umbrage to the final sentence above, arguing that the role of global warming in those specific weather events has been overstated, and/or improperly calculated. Others are fully supportive. But rendering an opinion about this is not the subject of my commentary.

Instead, I want to show that it really doesn’t matter. While these events may be noteworthy now, if temperatures continue to rise into the future, they will eventually become status quo and ho hum. And while that that may sound frightful now, by then, we’ll not even notice.

Over the past 142 years (from official records starting in 1871), the average summer temperature in our nation’s capital has increased by about 4.5°F from a variety of causes (Figure 2). 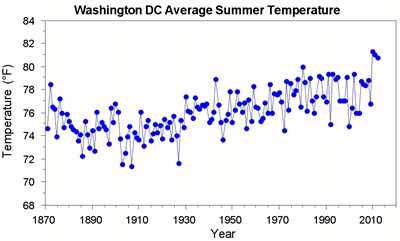 The standard deviation (of the detrended data) is about 1.5°F.

A bit of clarification about that last line is in order.

This summer included an intense and extended heatwave in DC that, no doubt, was particularly uncomfortable. And the past three summers in DC have been the three hottest in the 142 year record. Folks living there have no doubt noticed this and probably most wish that it would have been more “normal” and not so hot. But by normal, they probably are thinking about the conditions marking the past several decades for which they have grown accustomed, rather than the conditions of the late 1800s, of which they have no idea. And of the past 30 years, 15 of them had an average summer temperature that was more than 3 standard deviations above the summer temperature at the beginning of the record—in other words, “extreme” by late 19th century standards.

My guess is that few folks living in DC consider the general conditions during the past 30 summers (with the possible exception of the past three) to have been “extreme”, instead they were just taken as the typical climate. You probably would get a different answer if you were to ask folks of the late of the 19th/early 20th century DC to rate the summer conditions of the late 20th/early 21st century DC.

Perhaps by the mid-to-late the 21st century, conditions like the past three DC summers won’t raise an eyebrow either.

While this may be cringeworthy to think of now, by then, it won’t garner a second thought—just as we don’t give a second thought to today’s climate normals being “extreme” compared to the climate of a century ago. This is true not only in DC, but, I would guess, in every major city across the country, and probably in many rural areas in between. Acclimation and adaptation happen quickly, and often with positive outcomes.

Over the course of the past century and a half, while the climate was becoming “extreme,” Washingtonians are living longer and are less effected by high temperatures (even by today’s standards) than ever before. So, too, are most other Americans.

So is climate change worse than we thought? When it comes right down to it, I doubt that most people even care.