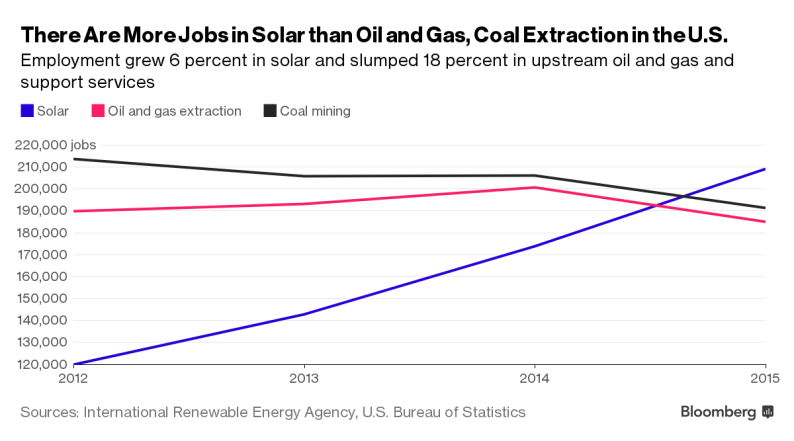 Ever wondered why has our standard of living not been improving?

The upward-aiming line in the above chart indicates one reason: growing employment in the renewable-energy sector. That employment contributes a miniscule amount to power production, and it does so at a dreadfully high operating cost.

Here are the numbers.

As illustrated, 200,000 people work in the solar industry (Photo-voltaic and Concentrated Solar Power combined), and they enabled the generation of 3.0 GW in 2015, which comes to 15 kW per employee. The down-sloping lines, combined, represent the 400,000 employees in the fossil fuel industry.

Assuming that about a half of those are needed just to supply fuel to generate the 310 GW electricity reported for that year, then the remaining 200,000 employees were responsible for 1550 kW per employee.

In other words, one employee in the fossil fuel industry produces 1550 kW, while it takes 100 employees in the solar business to produce roughly that amount.

Solar is thus the most expensive source of electricity. Plus, its output varies daily, sometime randomly (because of clouds and storms) and always intermittently (because of nights). Its inexhaustibility parallels the abundance of nuclear fuel, but the latter provides cheap and steady electricity, as well as heat, and is no less “clean” than solar.

Its production in terms of kW per employee, at 2000 kW, actually exceeds that of the fossil fuels, and has since the start of the industry a half a century ago.

The true cost of renewable energy is presently covered by subsidies drawn from our taxes, from Government borrowing abroad, and from various fees attached to our monthly utility bills.

A side note: While writing this, I overheard National Public Radio providing this statistic: If we were today to have the standard of living of the 1970s, the minimum annual wage would have to be $45,000 per year. That represents a more than 50 percent decline in the purchasing power of money.

The growth in US living standards started slowing with the ill-conceived War on Poverty under LBJ, then slowed further with the demise of nuclear energy and the “waste” reprocessing under President Carter. Alongside, there has been an addition of 20 million employees to the Government payroll and pensions and the addition of millions to the welfare rolls.

This is now being crowned by a manifold increase of subsidized employment in solar and wind energy projects, which supplied only 0.6 percent of our overall power needs in 2015.