Fighting AWEA in OH, MI, and DC: Thank You Volunteers for a Great 2013!

Thinking back over the past 12 months, it is amazing the things the Interstate Informed Citizens Coalition have accomplished together.

We attended nearly every Energy Forum in the state and brought informed speakers and testimony  before the MPSC and MEO.

I was able to present as a formal speaker in Traverse City. We picketed several Energy Forum events and handed out literature across the state and made our “Death Turbine” infamous!

We strengthened our ties with our Ohio brethren, excluding college football: 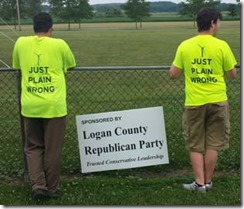 We picketed the AWEA in Columbus and East Lansing and got great press coverage for our efforts.

We assembled a team of expert witnesses who testified before both the Ohio House and Senate Public Utility Committees. My video from that event is here:

And a huge thank you for everyone’s financial support that made this event possible!

Our efforts in Ohio elicited a sharp rebuke from Senator Seitz to AWEA’s Michael Goggin: 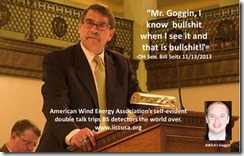 Senator Seitz is still working aggressively to roll back Ohio’s RPS law and is even considering bringing suit against their instate generation mandate personally.

I testified before the Michigan House Energy and Tech committee against PA295:

James Fuscaldo and I testified before the MPSC with respect to the unconstitutional instate renewable energy mandate.

I submitted a 30 page response to the State’s Draft Report on Renewable Energy. It appears that not only did we help frame the debate, the majority of my suggestions were incorporated in the final report.

And last week I returned from my trip to Washington DC where I was joined by Lisa Linowes from WindAction.org as well as Tom Stacy from Ohio.

We were hosted by the Institute for Energy Research. We spoke before maybe 60 congressional staffers, the press, and AWEA’s Michael Goggin. (My presentation is also on video.)

I have video of the other presenters as well but have not had time to edit them. But their excellent written testimonies are here: Lisa Linowes and Tom Stacy.

And I left a present at AWEA’s HQ-which then strangely disappeared …. 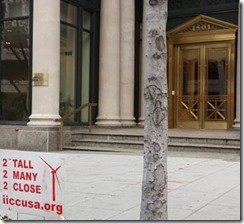 Tom, Lisa and I were able to interact with many congressional staffers and several members of congress.

I attempted to meet with Rep. Dave Camp’s staffer Adam Pradko but he would not see me. That was disappointing. It is deeply disturbing to me that Rep. Camp will speak to AWEA but not speak to his constituents about wind energy. Neither will Rep. Camp share his video presentation from the East Lansing AWEA event with his Michigan constituents.

There is not as much support for extending the Wind Energy PTC as there was last year. But AWEA has deep pockets and they are everywhere- from Lansing to Columbus to DC. But this year-thanks to your support- IICC was right there with them!

Senator’s Lamar Alexander (R)  and Joe Manchin (D) have signed a letter opposing the extension of the PTC. (see attachment)

Michigan Senators are MIA on this matter. You may want to forward this letter to them and ask why their name does not appear on it.

(The price of liberty is eternal vigilance…..but what a pain!)

I have been contacted by another community in the Thumb asking for our support to adopt a safe wind energy ordinance. We will do all we can.

There are many legal actions taking place around the state. I do not have time to recount them all at this time.

But one major blow to Big Wind is that Consumer’s Energy’s Lakewinds project was found to be out of compliance with the county zoning ordinance and the county’s third party consultant determined that Tech Environmental’s Peter Guldberg had designed the plant in such a way that it would never comply with the ordinance in the first place. Jack Spencer of the Michigan Capitol Confidential covered it well here: http://www.michigancapitolconfidential.com/19446

IF CMS loses at the ZBA we expect them to bring suit.

If CMS loses in court, their only apparent recourse would be to curtail the turbine operations to comply with the noise ordinance-which would be very expensive-or buy out the surrounding properties. Let us hope it is the latter. Or both!

Looking back over this list of events I realize there are so many people across Michigan and Ohio who helped us spread our message in so many ways.

And at a time when our federal government on both sides of the aisle seems so out of touch with the values of ordinary citizens, it is a real joy to be a tiny part of changing our state and nation for the better.

And better yet is the fact that we work together on these matters despite our different life experiences and party affiliations.

Many of us have sacrificed years of hard work in the battle for a sane energy policy. I am humbled to be numbered among you.

And I am humbled by the fact that when you folks hear of another community under threat, you stand prepared to fight again-even though that community may be hundreds of miles from your home.

Remember-you cannot be a NIMBY when you fight irresponsible wind development in someone else’s backyard! J

I am often asked about the status of renewable energy mandates in Michigan.

I do not believe the governor or legislature is interested in increasing a renewable energy mandate that results in far more wind turbines across the state.

They know that Michigan wind is expensive compared to our regional peers, the instate mandate is illegal and turbines are driving people from their homes while doing essentially no environmental good.

I have met only a couple legislators in Lansing that do not appear to understand that essential truth.

We have done a lot with a little this year. The truth is that we have only meager financial resources and little political clout. We cannot buy politicians or threaten to move voter blocks of hundreds of thousands of people. All we have is truth and science on our side.

But I still believe that if we can continue to be clever, accurate, and persistent with our arguments, we will change the world and stop the turbine madness.

From the bottom of my heart and on the behalf of the directors of the IICC: I wish you all health, peace, joy and justice for 2014.