Accusations of cherry-picking—that is, carefully choosing data to support a particular point—are constantly being hurled around by all sides of the climate change debate. Most recently, accusations of cherry-picking have been levied at analyses describing the recent behavior of global average temperature. Primarily, because claims about what the temperature record says run the gamut from accelerating warming to rapid cooling and everything in between—depending on who you ask and what point they are trying to make.

I am often asked as to what is the “right” answer is. What I can say for certain, is that the recent behavior of global temperatures demonstrates that global warming is occurring at a much slower rate than that projected by the ensemble of climate models, and that global warming is most definitely not accelerating.

But as to questions concerning just how far beneath climate model predictions the rate of warming is, or for just how long the average temperature of the world has not warmed at all, the answers depend on several things, among them the dataset you want to use and the time period over which you examine—i.e., which cherries you wish to pick.

Figure 1 illustrates the various cherry varieties that you have to choose from. It shows the global temperature history during the past 20 years as compiled in five different datasets (three representing surface temperatures, and two representing the temperatures in the lower atmosphere as measured by satellites—the latter being relatively immune form the data handling issues which plague the surface records). 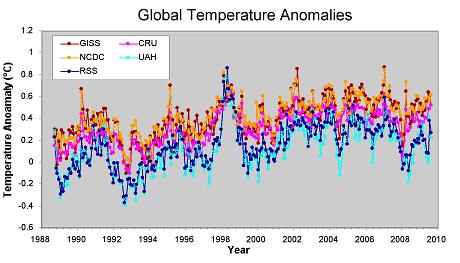 Figure 1. Global temperature anomalies from September 1989 through August 2009 as contained in five different data compilations. The GISS (Goddard Institute for Space Studies), NCDC (National Climate Data Center), and CRU (Climate Research Unit) data are all compiled from surface records, while the RSS (Remote Sensing Systems) and UAH (University of Alabama-Huntsville) data are compiled from satellite observations of the lower atmosphere.

To give you some guidance as to which cherries to use to make which ever point you want, I have constructed a Cherry-Pickers Guide to Global Temperature Trends (Figure 2). 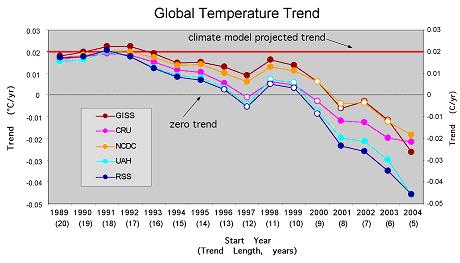 It shows the current value (though August 2009) of trends of various lengths from all of the five commonly used global temperature compilations. I compute the trends as simple linear least-squares fits through the monthly global average temperature anomalies for each dataset (from Figure 1). Each point in Figure 2 (for each dataset) represents the trend value for a different length period, beginning in September in the year indicated along the horizontal axis and ending in August 2009.

Starting in September of particular year and ending in August of this year produces a trend with a length expressed in units of whole years. For example, a trend starting in September 1999 and ending in August 2009 include 120 months, or 10 complete years. The values for the 10-yr trend for each dataset are plotted on the chart directly above the value on the horizontal axis labeled 1999. If the trend value is statistically significant at the 1 in 20 level (p<0.05), I indicate that by filling in the appropriate marker on the chart.

I also include several other items of potential interest to the cherry harvesters; first is the dotted horizontal line representing a trend of zero—i.e., no change in global temperature, and second, the thick red horizontal lines which generally indicates the average trend projected to be occurring by the ensemble of climate models. Bear in mind that red line only represents the average model expectation, not the range of model variability. So it shouldn’t be used to rule out whether or not a particular observed value is consistent with model expectations, but does give you some guidance as to just how far from the average model expectation the current trend lies (a cherry picker is not usually worried about the finer details of the former, but, instead, the coarser picture presented by the latter).

Here are a few general statements that can be supported with using my Cherry-Pickers Guide:

• For the past 8 years (96 months), no global warming is indicated by any of the five datasets.

• For the past 5 years (60 months), there is a statistically significant global cooling in all datasets.

• For the past 15 years, global warming has been occurring at a rate that is below the average climate model expected warming

And here are a few more specific examples that the seasoned cherry-picker could tease out:

• There has been no (statistically significant) warming for the past 13 years. [Using the satellite records of the lower atmosphere].

• The globe has been cooling rapidly for the past 8 years. [Using the CRU and satellite records]

Or on the other side of the coin:

• Global warming did not ‘stop’ 10 years ago, in fact, it was pretty close to model projections. [Using the GISS and NCDC records beginning in 1998 and 1999]

• Global warming is proceeding faster than expected. [Using the GISS record staring in 1991 or 1992—the cool years just after the volcanic eruption of Mt. Pinatubo]

I am sure the more creative of you can probably think of many others.

Another use of my Cherry-Pickers Guide besides choosing your own analysis, is to check and see what level of cherry-picking was required to support some statement of the behavior of global temperatures that you saw somewhere.

For instance, in a recent post over at RealClimate.org, Stefan Rahmstorf used about 10-yr to 11-yr trend in the GISS dataset to support the idea that global warming was proceeding pretty much according to plan, concluding “the observed warming over the last decade is 100% consistent with the expected anthropogenic warming trend of 0.2 ºC per decade, superimposed with short-term natural variability.”

A quick check of my Guide would show how carefully Rahmsdorf’s selection was made. Trends a few years longer or a few years shorter that the period selected by Rahmstorf would not have borne out his conclusion with as much conviction.

Another example of careful data selection can be found in recent claims made by Richard Lindzen who is fond of stating that “there has been no statistically significant net global warming for the last fourteen years.” A quick check of my Cherry-Pickers Guide shows Lindzen to be particularly crafty because there is no support for such a statement in any of the five datasets. So how did he arrive at that conclusion? By using annual data values instead of monthly data. Using fewer data points (14 annual values instead of 168 monthly ones) doesn’t affect the actual trend value so much, but it does affect the statistical significance of the trend. The fewer data points you use, the less significant the trend is. So by using annual data (from the CRU or satellite datasets), Lindzen is able to cite a 14-yr temperature trend that is not statistically significant.

The statements by Rahmstorf and Lindzen are not wrong, per se, but neither are they particularly robust.

So next time you encounter some claims about what recent temperatures tell us about global warming, or want to make one yourself, check my Cherry-Pickers Guide to get a full appreciation for the degree of grounding that such statements enjoy. And for those folks who want to push the envelope a bit, you’ve got to hope that your audience doesn’t have access to my Guide—otherwise, someone, somewhere, is sure to call you on it!