OVERBLOWN: Getting to the Facts on Emissions (Part II)

FACTS ARE STUBBORN, BUT STATISTICS ARE MORE PLIABLE

This section reviews the criticism the American Wind Energy Association (AWEA) makes about the Bentek report and the evidence the organization offers purporting to prove how wind reduced substantial greenhouse gas emissions in Texas and Colorado. The section concludes with an examination of what the EIA data really show for those states for 2007 versus 2008—and what the official Energy Information Administration (EIA) reports say about causal factors for any CO2 reductions.

The Bentek study showed that wind volatility in the sampled regions of Colorado and Texas caused more CO2 emissions than would have been the case with less wind and more efficient coal plants. Using mostly sub-hourly performance data, Bentek was able to “examine in detail how coal, gas and wind interact and the resulting emissions implications.”

In general, the research team found that wind, typically much more active at night when demand is least, was more entangled with base load coal plants given that more flexible and costly gas plants were dispatched to meet higher daytime demand.

As Robert Bryce reported in his influential Wall Street Journal article, the repeated cycling—ramping up and back—of coal plants, with their higher CO2 concentrations, created heat rate penalties that produced a greater volume of CO2 emissions. The coal plants in a wind balancing role were operating more inefficiently, and thus required more fuel, much in the way an automobile does when driven in stop-and-go traffic.

As noted in Part I of this series, Bentek then recommended that better results for carbon emissions offsets could be produced by introducing more responsive natural gas units on the system, in part replacing the coal plants with machines that burned 50% cleaner.

AWEA maintains this study must have been seriously flawed, since, as more wind was installed on the systems, EIA data showed that CO2 and other greenhouse gas emissions declined between 2007 and 2008, and, within both states, coal and natural gas consumption fell as well. Goggin then quotes Frank Prager, who “pointed out the flaws … in the (Bentek) study and reconfirmed that wind … significantly reduced fossil fuel use and emissions….” But as vice president of environmental policy for the energy company, Prager is not a disinterested party. But it’s the evidence that’s important, not his testimonial.

The statistics that AWEA presents are accurate—as far they go. But there is more to the story. The wind trade association neglected to mention that both states increased their net imports of out-of-state electricity capacity by an amount that exceeded the reductions in in-state fossil fuel use.

Figure 1 illustrates what AEWA claims to be the case: 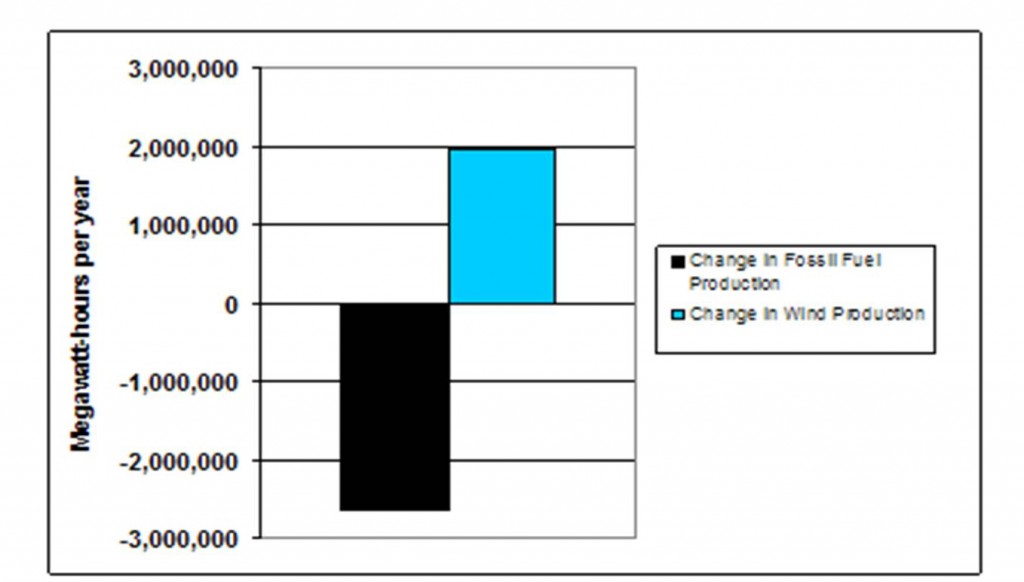 However, to get a broader picture, it is necessary to look to other DOE data, which includes interstate traffic in electricity. In 2008, Colorado had net imports of 3,604,000 MWh of electricity, and Figure 2 adds this to the Figure 1 representation. 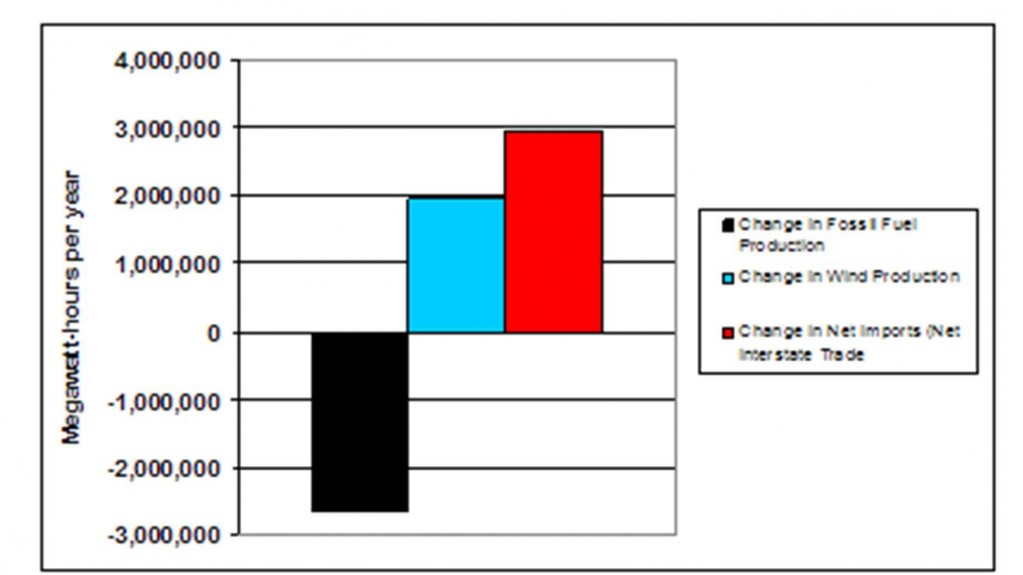 Consequently, there is another more plausible explanation for the reduction in fossil fuel use and greenhouse gas emissions in Colorado: increased net imports that were CO2-free for the state.  Moreover, the imported electricity was most likely firm capacity from fossil fuel, nuclear or hydro plants. If so, this completely circumvents the entire problem caused by increased wind volatility, which is a greater issue than steady operation at lower utilization. As an official from the Ontario IESO once said, “It is better to have a reduced capability that is available when needed than a greater capability that is only available when it is not needed.”

If anything, accounting for imports confirms the Bentek findings, reinforcing the view that increasing wind volatility imposes thermal inefficiencies throughout the system, ultimately saving no conventional fuels and, in the case Bentek studied, increasing CO2 emissions. AWEA, in short, has confused correlation with causation. Simply because there was a decrease in in-state fossil fuel use does not mean increased wind generation was responsible.

As Noble laureate Richard Feynman once said about scientific integrity:

if you’re doing an experiment, you should report everything that you think might make it invalid–not only what you think is right about it: other causes that could possibly explain your results; and things you thought of that you’ve eliminated by some other experiment, and how they worked–to make sure the other fellow can tell they have been eliminated.[3]

The same situation occurred in the Texas study area. Increased net imports from other states also more than compensated for reductions over this time period in in-state fossil fuel use. Moreover, USEIA state-by-state data show that, from 2005 through 2007, CO2 emissions in Colorado had increased steadily, despite increasing numbers of wind projects. For Colorado, CO2 emissions were 41.2 million metric tons in 2005; by 2008, there were 41.5 million metric tons, down slightly from 2007 levels of 43.4.

In Texas, the situation over the entire decade shows ups and downs along a fairly steady state, varying only by 9%. In 2000, emissions were 264.4 million metric tons—a decade high. By 2005, emissions were 260.7; by 2008, they had declined to 252.1, down from the previous year’s total of 257.1, for reasons, as in Colorado, that can be accounted for by an increase in net imports, among other reasons. (For those interested in whether or not wind reduces Danish CO2, check out increased imports of hydro [not just exported wind to Scandinavia] and the higher efficiency of newly installed CHP plants.)

A review of the history of changes in fossil fuel generated electricity and net imports provides further support for the thesis that imports are the source of reduced fossil fuel plant use. Since 2000, and before the introduction of much wind activity, there are years that show similar change patterns. One year shows substantial growth in in-state generation and much reduced imports, and other years show small amounts of change in in-state generation and imports, representing a more-or-less steady-state condition. Further motivation for changes on a year-to-year basis may reflect wholesale pricing conditions at the time.

Nationally, grid managers at the beginning of the decade anticipated demand increases of more than 2% annually, and called for new power plants to meet it. When demand actually decreased because of the economic crash in 2007, any new plant that came on line in that year, replacing an older unit that was to be retired in 2008, could have been responsible for an increase in megawatts for 2007—and then a sudden reduction in 2008. Alternatively, some of these plants now supply more than is needed because of reduced demand, and are dispatched less often than originally intended.

Despite the plausibility of the net import case for the small reductions in fossil fuel use and greenhouse gas emissions in 2008, much uncertainty nonetheless remains about what is actually happening. The variables involved are highly complex and one should examine them both individually and as they interact. Although, because so many things are possible, it is possible that wind may have played a role, that idea must compete with more probable events. Figure 3 rather dramatically illustrates there is more at play than changes in fossil fuel production affecting CO2 emissions levels, since the two phenomena don’t appear well correlated. 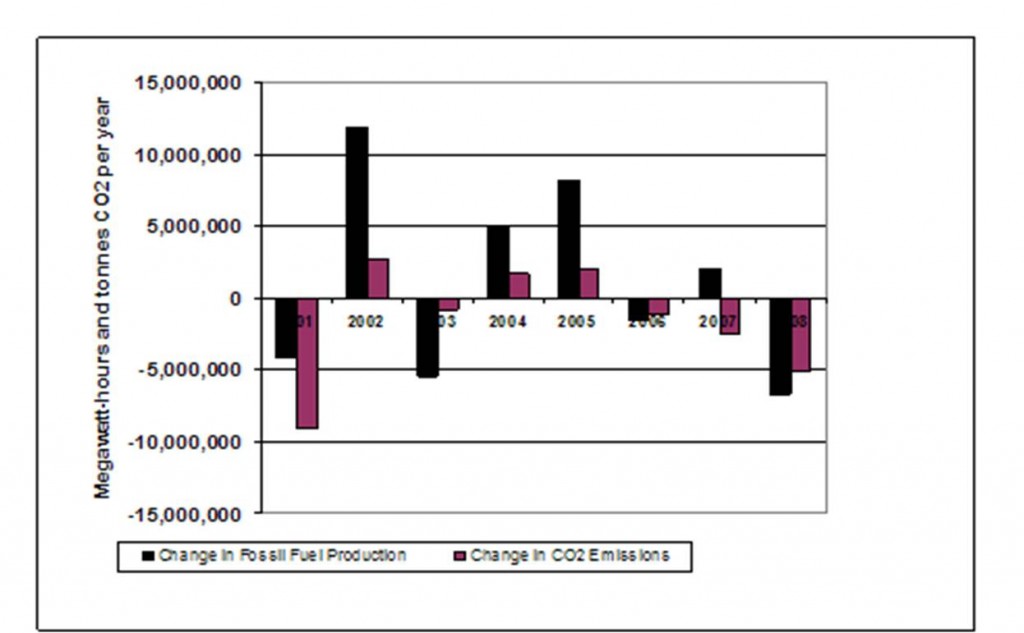 AWEA’s contention that there exists “overwhelming evidence,” “indisputable data,” and “uncontestable benefits” to support its belief that wind is a potent offsetter of emissions is, at best, disingenuous and probably spurious. It is definitely not derived from scientifically vetted evidence. Whatever claims are made for wind should not ignore a grid’s requirement for capacity, in most cases in the form fossil-fuel plant operation inefficiently used to balance unreliable and erratic wind production.

This is particularly true in any discussion about AWEA’s claim that wind has “nearly zero marginal operating costs” compared to conventional generation. It should be. Considering that its capital plant cost is almost wholly subsidized by public dollars (note the other elephant in Bryce’s article was the high per energy unit subsidy for wind), one should wonder why wind charges a dime for its product (on some grids, it must). Even so, comparing the costs of capacity-less wind to the costs—at any level of consideration—of firm capacity plants seems incredibly naive.

It is only appropriate that a third-string college-league first baseman, who made the team because his father contributed to the alumni fund, costs less than the major league’s Babe Ruth. And let’s agree that the nearly zero operating cost of a soapbox derby vehicle, which at least has some manageable capacity, is incomparably less than that of a Boeing 747.

The following provides links to the other posts in this series as they are published:

Part I – Windpower on the Firing Line

[3] http://www.lhup.edu/~DSIMANEK/cargocul.htm. Adapted from his commencement address at Caltech in 1974