The Federal agency charged with protecting endangered species under the Endangered Species Act is evaluating a plan to allow a 200-mile wide corridor for wind energy development from Canada to the Gulf of Mexico. The draft land-based guidelines–made ostensibly to avoid, minimize, and compensate  for effects to fish, wildlife, and their habitats” — represent one more example of overt and destructive favoritism for an industry that already benefits from fat tax subsidies and mandated market purchases.

The plan by U.S. Fish and Wildlife Service (FWS) would allow for killing endangered whooping cranes. The government’s environmental review will consider a permit, sought by 19 energy developers, which would allow constructing turbines (over 300 feet tall) and associated transmission lines on non-federal lands in nine states from Montana to the Texas coast, encroaching on the migratory route of the cranes.

The permit from the FWS would allow the projects to “take” an unspecified number of endangered species. Under the Endangered Species Act, “take” is just the euphemism for killing or injuring an endangered species. The government can issue permits to kill or injure listed species with no penalties or risks of lawsuits to developers if they agree to craft conservation plans. 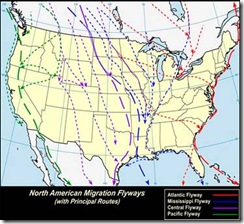 The Administration’s latest wind energy proposal raises concerns because the developments would imperil the habitat of the whooping cranes, including the Central Flyway (shown in purple), a migratory path that cuts through North America, not surprisingly where wind developers want to build, because of prevailing winds.

The leading cause of death for the nation’s last historic population of whooping cranes, which stand at 5 feet and have a wingspan of more than 7 feet, is overhead utility lines, the Fish and Wildlife Service has said.

FWS Director Dan Ashe said that wind energy is crucial to the nation’s future economic and environmental security, which is why the agency is paving the way for a renewable energy project with an undetermined number of wind turbines generating an unidentified amount of electricity along the 200-mile-wide corridor. How, oh how, will they guess at the number of whooping cranes to be sacrificed. I hope it’s not 280, the estimated number now, after decades of protection and up from an estimated 16 in 1930.

“We will do our part to facilitate development of wind energy resources, while ensuring that they are sited and designed in ways that minimize and avoid negative impacts to fish and wildlife,” Ashe said in a statement. I suppose he hasn’t yet learned that wind energy is more expensive and that most turbines are imported and do next to nothing for the nation’s economic future. In fact, they make it worse. I suppose he doesn’t realize that wind energy requires MORE transmission, because of low capacity factors, leading to increased bird collision risk. I also suppose he hasn’t read the numerous studies showing that wind turbines actually cause increases in emissions.

I also suppose there’s a really, really good reason USFWS changed their position since last April. Back then, Xcel Energy Inc. decided to scrap a $400 million wind farm project in southeast North Dakota after the Fish and Wildlife Service noted the wind farm’s potential adverse impacts on the whooping crane and piping plover. FWS notified San Diego-based enXco, under contract to develop the project for Xcel, that the project’s 262-foot-tall wind turbines, with blades stretching out 126 feet, could harm whooping cranes, plovers and other migratory bird species, in apparent violation of both the Endangered Species Act and international migratory bird treaties.

In Xcel Energy’s filing formalizing the project’s abandonment, vice president David Sparby wrote that FWS’s concerns led to “uncertainty in the cost and timing in mitigating this impact,” which in turn prompted the decision to cancel the project.

Though exact mortality figures are unknown, FWS calculated in a 2009 report that collisions with wind turbines kill an estimated 440,000 birds a year, including numerous endangered and protected species, and some fear that number will grown substantially as more wind farms are built in remote areas, including key migration corridors. Yet, in the face of daunting numbers, USFWS decided to allow more takings to encourage wind energy?

As Darren Nelson writes in an upcoming edition of Heartland’s Environment and Climate News, wind turbines at Altamont Pass are killing approximately 67 protected golden eagles each year, as well as thousands of other birds. In a June interview with the Los Angeles Times, Doug Bell of the East Bay Regional Park District’s wildlife program warned that: “It would take 167 pairs of local nesting golden eagles to produce enough young to compensate for their mortality rate related to wind energy production [assuming no net positive immigration of these raptors]. We only have 60 pairs.”

State and Federal wildlife regulators were set to let the areas Golden Eagles go extinct, all in the name of wind energy. It took a court order to finally shut down some of the turbines during the most hazardous times of the year. Whether it is enough to save the Eagle is yet to be seen.

The 420 wind turbines now in Pennsylvania killed more than 10,000 bats last year — mostly in the late summer months, according to the state Game Commission. That’s an average of 25 bats per turbine per year, and the Nature Conservancy predicts as many as 2,900 turbines will be set up across the state by 2030. The wind farm mortality is an example of how harnessing renewable energy can lead to negative outcomes. Bat populations go down, bug populations go up. While wind energy is given a pass for killing endangered species, other natural resource users are less lucky.

In Wyoming regulators fined a refinery owner $850,000 for violations that killed several dozen birds. The owner of the refinery near Rawlins agreed to a multi-million dollar settlement with state regulators regarding a 2010 incident that killed dozens of birds. Sinclair Wyoming Refinery Co. will pay $850,000 for releasing oil into a wastewater evaporation pond at its refinery, the Wyoming Department of Environmental Quality. Sinclair also agreed to spend $4.5 million on equipment upgrades and training. On April 25, 2010, the company notified state environmental regulators that oil had been released into one of the refinery’s wastewater evaporation ponds. After the release, 80 migratory birds were found dead in the polluted pond, a company spokesman said shortly after the incident.

Back in California, because of environmental regulations designed to protect the three-inch long delta smelt, one of America’s premier agricultural regions is suffering in a drought made much worse by federal regulations. The state’s on-going water emergency is thanks to the latest mishandling of the Endangered Species Act. U.S. Fish and Wildlife Service issued a “biological opinion” imposing water reductions on the San Joaquin Valley to safeguard the federally protected delta smelt.

As a result, tens of billions of gallons of water from mountains east and north of Sacramento have been denied farmers and just emptied into the ocean, leaving hundreds of thousands of acres of rich farmland scorched and non-productive. The National Marine Fisheries Service also concluded that local salmon and steelhead need to be defended from the valley’s water pumps. The result has already been devastating for the state’s farm economy. In the inland areas affected by the court-ordered water restrictions, the jobless rate has hit 14.3%, with some farming towns like Mendota seeing unemployment numbers near 40%. Food prices nationwide have seen increases as a result of the lack of water delivery.

Isn’t it time that the Endangered Species Act is applied uniformly? Given the death of environmental benefits afforded by wind energy, isn’t it time to end the favoritism?

Isn’t it time somebody speaks for the whooping crane before it’s too late?  I thought that was the job of USFWS–and mainstream environmental groups that find themselves increasingly behind energy technologies that cause core harm to wildlife and nature in general.