Gouging, Free Markets, and the Psychology of Fuel Prices

Four-dollar diesel (forgive an agricultural bias) is an ugly thing–but not the ugliest of things. To grossly paraphrase John Stuart Mill, the state of moral feeling that thinks that government should “keep prices reasonable” is far worse.

Prices at the pump are (for the most part) an elegant demonstration of market forces at work. It should come as no surprise then, that they tend to raise the ire of those who distrust markets and favor their manipulation. (And what goes up also comes down–the trend is positive right now.)

Whether it’s because the prices are so prominently displayed, or because so many of us so often pay them, fuel prices are a tempting target for the command-and-control set.

Economies (and Psychologies) of Taxation

The keen attention we Americans pay to fuel prices is both a blessing and a curse. It’s a blessing in that it helps hone the system to a remarkable degree of efficiency. Nature abhors a vacuum, and economies abhor waste. The cumulative cost-whittling by thousands and thousands of fuel-sector vendors, each doing his best to minimize wasted resources, delivers fuel as cheaply as physically possible.

The collective price-consciousness is a curse, however, because large groups of people can fall victim to what James Surowiecki, in the Wisdom of Crowds, calls an “information cascade.”

Information cascades are circumstances in which bad information or poorly perceived reality is passed from one individual to another without reasoned inquiry. These examples (stock market bubbles and crashes, riot dynamics, and most of higher education these days) inevitably lead to disturbingly close-minded groupthink.

I have always found it remarkable for instance that people (self included) will drive around the block to hit a gas station priced a penny lower, but couldn’t be troubled to pick up the same penny off the oil-stained parking lot (or even twenty-five of them on an average fill up). It won’t soothe the psyches of dollar-conscious cross-town navigators to discover that the increase in ambient temperature during their ‘economizing’ commute cost them a buck or two more than they saved.

BTU-density and opportunity-cost aside, perhaps one of the most egregious examples of delusional groupthink is our collective ignorance of the role of taxes in fuel prices. Americans pay an average of 49.5 centson every gallon they purchase in federal and state taxes, environmental remediation, and local surcharges. Can you imagine your local filling station suddenly increasing (or decreasing) its price by fifty cents a gallon? It would certainly be attention-getting behavior!

Since taxes represent more than double the per-gallon share garnered by truckers and station-owners combined, you would think they would get more attention. But when it comes to complaints of “gouging” guess who ends up in the crosshairs?

It is always the local station owner who is called up on charges of “excessive” prices, or distributors who are investigated by state attorneys general. Yet for some reason taxes slide quietly under our combined radar, only coming into question when a forward-thinking activist suggests they ought to be higher, a la Europe (home to vehicles that would conveniently fit in my back seat).

So on which side of the fuel pump should the State stand? First, government ought to stay out of pricing altogether. Jefferson is often quoted as saying government should leave a behavior alone “if it neither picks my pocket nor breaks my leg.”

There is a perception among many that price gouging is a form of theft, an artificial and unilateral activity undertaken by profiteering capitalists. This perception justifies demands that government get involved when prices become “unfairly high.” But there is simply no way to logically argue that people are being robbed if they have the ability to choose to not pay.

However painful it may be to leave the car in the garage and find an alternative means of getting where you need to go, there is no instance where a high price could be considered theft. Attorneys General, therefore, should never engage in investigations of price alone.

There areinstances of theft at the pump where I would advocate for the power of regulation. If a designing station-owner tinkers with his fuel dispensers to provide less fuel than indicated, he has engaged in behavior that clearly “picks my pocket.” While a completely unregulated market would theoretically purge this actor from the system (as information leaked to purchasers), it ought to be one of the limited powers granted to government to prevent this kind of willful thievery.

Requiring every pump to be registered with a department of weights and measures is excessive, but an authority ought to be given power to investigate and fine miscalibration and short dispensing.

Finally, government ought to make its own role in fuel pricing abundantly clear. Since every state (right or wrong) requires pumps to post a weights and measures tag, they ought also to require that the cumulative taxes be marked. Arizona does this with its state taxes (18 cents/gallon), but that only begins to hint at the overall tax burden imposed. If consumers were clearly informed of the toll that government takes on each gallon of fuel, perhaps some of the clamoring against gouging would find vent in other places…

This may not be for everyone, but wouldn’t it be wonderful to declare fuel independence? And I don’t mean through government programs for “green energy” or an ethanol subsidy (which, by the way, was recently rescindedin part, thank goodness).

I mean at an individual level, where independence is most interesting. For instance, we make some of our own diesel out of beef tallow from our packinghouse at about half the cost of the commercial alternative. We’ve turned a “waste” product with complex disposal fees into a valuable resource, reducing one of our largest overhead costs. Call me old-fashioned, but this kind of entrepreneurial response to market signals is an awful lot more constructive than lobbying for “affordable” diesel. But I don’t want tax breaks to do it–it just has to work for me financially or otherwise.

We all live, despite misgivings, in an economy greased with energy-dense fossil fuels. It would be a fallacy to imagine an immediate turn away from this dependence, especially if you think that government manipulations of behavior will get us there. It is equally fallacious to imagine our collective dependence to last forever. Very few foresaw the rapid transition from fodder-based to hydrocarbon power in the mid 19thcentury (though interestingly enough Abraham Lincoln publicly advocated the radical idea of a “steam plow” in 1859, a reality we see every day in modern agriculture).

By promoting the individual development and harnessing of fuel, we can avoid the pitfalls posed by centralized control. Jefferson, who by all rights ought to be called the “Great Diffusor,” would readily agree. By putting both the political power to decide and the technical power to movein the hands of individual citizens, the temptation to control these citizens will run out of gas.

Paul Schwennesen is a southern Arizona rancher. He can be reached at AgrarianLiberty.com 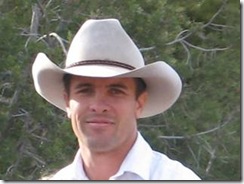 Paul holds a Master’s degree in Government from Harvard University and a dual Bachelor’s degree from the Air Force Academy. He appears frequently on FOX Business News, and is a regular contributor to the Property and Environment Research Center. His writing has appeared in The Freeman, The Tucson Citizen, Stockman Grass Farmer, Master Resource, and the Arizona Cattlelog.