Here is the list of the UT Energy Institute’s overview of findings:

Why Past Media Misperception?

Another interesting finding in the UT study, though, related to the media’s coverage of hydraulic fracturing. “For the nation as a whole,” the authors write, “the attitudes were found to be uniformly about two-thirds negative.” The accompanying chart in the study bears that out: 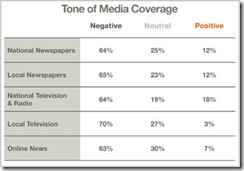 What could explain this? As the study notes: “With respect to reference to scientific research, the search found that few articles referenced research on the topic of hydraulic fracturing.” In fact, the study finds that only 18 percent of newspaper articles actually referenced scientific research in their coverage of hydraulic fracturing. Only 25 percent of television coverage cited available research, whereas online news – which was the highest rated in terms of referencing science – came in at only 33 percent.

In other words, less than one-third of all coverage of hydraulic fracturing doesn’t even bother to cite widely available science on that issue, and two-thirds of all coverage is decidedly negative. As the saying goes: “Coincidence? I think not.”

The authors go on to say conclusively that “much of the information being reported is not based on, or at least referencing, scientific research,” adding that for policymakers and the public to understand the issue better it is “imperative that media coverage represents the breadth of issues associated.”

Some Texas newspapers reported the UT findings forthrightly, such as Vicki Vaughan in the Houston Chronicle: “Study: Fracturing No Threat to Groundwater” (February 16, 2012).

EcoCentric (Time Magazine): “Shale Gas: It’s Not the Fracking That Might Be the Problem. It’s Everything Else”

Another media shortcoming was called out by Mike Hashimoto of the Dallas Morning News: burying the good news in obscure sections of the newspaper. Indeed, Hashimoto even accused his own paper of doing that with the UT study! In his words:

Even though the study was released Thursday, my newspaper chose to wait a day and bury it as a “news brief” on Page 3A of Saturday’s edition, ripping four paragraphs from an Associated Press report. Not even a staff byline. (To be fair, we did have a staff byline in November, when preliminary findings pointed toward “no direct link”; we buried that story inside the Business section.)

The media- and advocate-driven hysteria over hydraulic fracturing – “fracking” in the vernacular – would have led you to believe otherwise. Fracking, one would think, ranks just behind coal plants, nuclear disaster and oil wells blowing up in the Gulf as the environmental scourge of our times.

Another interesting finding worth noting relates to state violations against gas producers. The authors found that, by an overwhelming margin, most violations are procedural or minor without any environmental impacts, a far cry from the doomsday headlines that suggest natural gas development is a modern day Wild West.

According to the study:

Generally, this information suggests that many of the violations are procedural and represent no environmental effects; are minor with no effect – meaning that an inspector noted a flaw in a pit or casing job, for example, but did not note any release of contaminant to the environment as a result of that flaw; or represent minor effects, such as small releases. (p. 50, emphasis added)

As state regulators from across the country have stated (and the EPA has confirmed on multiple occasions), hydraulic fracturing is a safe and tightly regulated technology helping to unlock enormous amounts of affordable American energy, as well as helping to create hundreds of thousands of jobs and re-grow the economy. This study from UT-Austin only adds to the scientific consensus surrounding the safety of shale development.

But the big question is, as the study suggests: Will the media ever acknowledge it?