“Many academics and journalists apparently don’t know the difference between a 100-year flood and an unpredictable inundation from a super storm–and the different impacts in the Plains and the Basin states.”

“A political and/or market policy solution for damages from super-storm inundations has a greater likelihood of success by substituting realism for ideology: Inundations are not the same as 100-year floods and are not the result of man-made climate change.”

Ambrose Bierce’s fable of Philosophers Three tells the story of a Bear, a Fox and an Opossum that were attacked by a flood inundation. The Bear went forward to fight the flood. The Fox thought the Bear was a fool and climbed into a hollow tree stump. However, the Opossum recognized there were evil forces at work that could not easily be confronted but also could not be avoided, so he decided to play dead.

The critical thing, said the Opossum, “is to know the nature of your opponent.”

Ambrose Bierce’s fable indicates it is important to know the true definition of the problem that flooding and flood insurance poses before proposing solutions.

To those on the political left, the problem is to change the Federal Emergency Management Agency’s (FEMA’s) floodplain mapping and cost/benefit–analysis model to socialize flood losses over a larger base of the uninsured.

To those on the political right, however, “building in a floodplain is like pitching your tent on a highway when there are no cars coming”. They want FEMA to stop incentivizing “moral hazards” of building in 100-year flood zones and prevent privatizing flood insurance. They want to pretend that hurricane inundations are like river floods, when they are not, because they do not merely impact engineered and mapped flood zones, especially in Plains States.

Paraphrasing Shakespeare, a plague, or a flood, on all their flood-prone houses.

Inundations are ubiquitous but can’t be mapped because they affect some structures and not others in the same areas depending on the height of the inundation. Moreover, FEMA flood policies are mainly designed to deal with flooding that occurs in Basin States where there are rivers that flow along river courses into valleys underlain with permeable alluvial soils and eventually flow to the sea (think California).

The reality of Hurricane Harvey was flooding that ponded, owing to impervious clay soils, and didn’t confine itself along river courses in the Houston area of Texas, a Plains State. In FEMA’s Federal Guidelines for Inundation Mapping of Flood Risks Associated with Dam Incidents and Failures” (FEMA P-946/July 2013), an Inundation Map is defined as “a map showing areas that would be affected by flooding from an uncontrolled release of a dam’s reservoir”.

Likewise, the Union of Concerned Scientists pretends to be expert by defining inundation in a circular fashion as a community that becomes “chronically inundated”. This entirely misses the empirical reality of an inundation as occurring nearly everywhere in a region, not within defined zones and not soaking into the ground.

Inundations wipe out the local economy and the real estate market, so finding market solutions is difficult. In other words FEMA’s flood mapping is focused on inundations from dam failures not inundations from hurricanes and super-cyclones in Plains States with impervious soils.

This is perhaps why Nicolas Pinter, the associate director of the University of California Center for Watershed Sciences, was apparently surprised to find that satellite imaging of Houston showed large portions of the flooding was outside the 100-year floodplain (or dam failure inundation zones). Many academics and journalists apparently don’t know the difference between a 100-year flood and an unpredictable inundation from a super-storm–and the different impacts in the Plains and the Basin states. 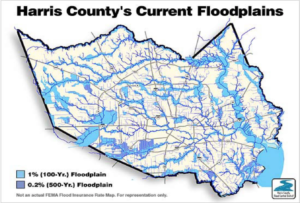 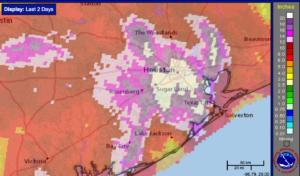 Policy experts and journalists try to change words when reality is unpalatable to their ideology.  There are at least three major implications from politically correct flood policy:

1. If all deluges or swamping events are floods, without any differentiation from inundations from super-storms, then there are no floods because every rainstorm is a flood. There needs to be a differentiation of public policy to first “know the nature of your antagonist”: the reality of flooding itself and the bureaucratic definitions and policies that interpret or misinterpret that reality.

2. FEMA’s “one-size fits all” flood policy doesn’t distinguish for geography. Basin States like California typically don’t have hurricanes or cyclones that dump ocean water over a wide area as do southern and eastern Plains States. Basin States typically have wide valleys with permeable alluvial soils and defined river courses or man-made flood channels. On the other hand, Plains States have impervious clay soils and offshore hurricanes that don’t confine themeselves to dropping water along river courses.

Yes, beach houses on Galveston Island, Texas, may require Hurricane Insurance for a few areas on the island not within FEMA designated flood plains today. But middle class homeowners won’t be able to afford the insurance if unsubsidized, and historical homes and tourism will be squelched on the island. So is flood insurance a luxury public good? If so, perhaps a nationwide insurance pool of beach and river luxury homes needs to be developed over which to spread the insurance risk.

But if there is some moral superiority advocating that houses for the wealthy should not be built in flood zones, why does Los Angeles allow dense populations within smog basins that require air quality regulation and a cap-and-trade emissions taxes? It could be argued that at least California attempts to “internalize their externalities” (e.g., negative side effects or spillovers) that result from technological living within smog traps.

But a flood, or inundation, is not an externality that arises from some industrial use or operation of hundreds of thousands of vehicles; it comes from nature and can’t be adequately captured internally because it overwhelms the resources available. This raises the question whether academics, government apparatchiks, and the media advocate for man-caused global warming in order to peg what is caused by nature on industrialization. Paraphrasing President Ronald Reagan: “If it floods, tax it. If it keeps flooding, regulate it. And if it stops flooding, subsidize it.”

Apparently, many academics and the media are not aware that the Biggert-Waters Act of 2014 ordered a stop to subsidizing flood insurance for second homes and businesses, and businesses that had been swamped multiple times. There are 140,000 homes in Houston in the 100-year flood plain (and three 500-year storms in the last 3 years in a row), with 373,000 flood insured policyholders in the area affected by Hurricane Harvey. There were 946,571 housing units in Houston as of 2015, thus 39 percent have flood insurance but only 14.9% are in mapped floodplains. This is why FEMA is reportedly re-building the shell of many uninsured homes from the foundation up, because the damages from Harvey were too extensive and widespread and there is no market for recovery.

3. Academicians, policy experts and the media have a tendency to define all deluges as “floods” because it covers up what is man made and attributes it to nature; or vice versa attributes to man what is natural.

California drought policy is very similar in that all water shortages are declared a drought even though California runs a permanent annual water deficit that compounds into a drought every five years whether there is a dry spell or not. Hence some California “droughts” have to be manufactured, such as the 2007-2010 “wet drought” that was ostensibly caused by a court to protect a minnow fish in the Sacramento Delta even though there was no scientific basis for its protection. The media and politicians can sell a “drought,” but not a structural water shortage worsened by not building enough dams.

But this word twisting works in reverse with flood zone designations. Super-storm inundations are considered the result of being man-made through global warming instead of acts of nature. There is an Orwellian nature (inundations are man-made floods) to the nomenclature of flood policies (“war is peace”, “freedom is slavery”, “ignorance is strength” – George Orwell, 1984). Flood and drought policies are often based on twisted clichés and political slogans but done so in the name of “science”. Repeat Ambrose Bierce: know your enemy and their social definitions of the situation.

Flood insurance policy in the United States has been mainly based on directly attacking flooding with pork barrel infrastructure, regulating flood zones, and subsidizing the insured and uninsured or pretending that super-storm inundations are caused by man-made climate change resulting from industrialization.

All of these policy responses ignore the reality of super-storm inundations that wipe out local economies and real estate markets, as well as affect Plains States differently than Basin States, thus negating any likelihood of a market solution. Failure of homeowners to insure against losses in flood plains is not recklessness because, unlike 100-year floods, inundations can’t be mapped, predicted, or easily marketized.

A political and/or market policy solution for damages from super-storm inundations has a greater likelihood of coming about by first finding more non-ideological and realistic perceptions. Inundations are not the same as 100-year floods and are not the result of man-made climate change.

Wayne Lusvardi worked for California’s largest urban water agency for 20 years and is an independent public utility, water rights, and land appraiser. He completed a mass valuation of likely flood damages that could result in Southern California from a massive earthquake and dam failures. His previous posts at MasterResource are here.