“The federal coal leasing program continues to be a success for America, contributing nearly $12 billion over the past ten years from royalties, rents, bonuses, and other payments according to BLM.”

“Premature shutdown of coal-consuming plants is a trend already occurring due to the influence of an increasing number of environmental regulations promulgated for such plants. The robust marketplace competition that exists between coal and natural gas.”

In January 2016, the Department of Interior (DOI) announced a three-year moratorium on new federal coal leases while it completes a review of the federal coal leasing program. DOI’s Bureau of Land Management commenced the Programmatic Environmental Impact Statement review process in March.

As it assesses the issue of fair return to taxpayers, however, BLM is considering reform approaches that would significantly increase the costs of federal coal production. This includes raising the royalty rate by 50% for surface mining, from 12.5% to 18.75%. BLM is also evaluating several approaches to addressing environmental concerns and climate impacts, and may also incorporate an “adder” to ostensibly reflect the cost of externalities.

BLM may also consider reforms suggested by industry that may promote federal coal production and increase taxpayer revenues through a lowering of the royalty rate or other means to improve the leasing process. Additionally, BLM has the option of doing nothing and leaving the program as currently structured.

The American Coal Council’s comments address our concerns about reforms of the federal coal program that would have detrimental economic consequences for coal producers, the coal supply chain, states and local communities, and the ultimate American consumer and taxpayer. We oppose any such reforms, including those that would limit access to coal reserves and delay the permitting process, and that would unnecessarily or inappropriately change environmental requirements.

The BLM is the steward of the coal mineral resource on lands owned by the federal government, and has responsibility for the federal coal leasing program. BLM collects revenues from the program in the following ways – a bonus payment made when BLM issues the lease, an annual rental payment, and royalties paid on the value of the coal. The federal coal leasing program has been very successful under its current structure. According to the BLM, nearly $12 billion was generated over the past ten years from royalties, rents, bonuses, and other payments under the program.

The American Coal Council is greatly concerned about any reform of the federal coal program by DOI-BLM that would increase the cost of mining and thereby negatively impact the ability of coal suppliers to compete in the highly competitive U.S. and global energy markets. Comments made by various individuals and groups at the BLM scoping sessions indicate a lack of understanding of the coal and energy marketplace, resulting in the simplistic assumption that reform is needed and will boost federal coal revenues.

The recent report on the economics of federal coal leasing issued by the Obama administration’s Council of Economic Advisors (CEA) mirrors that lack of understanding. This government modeling exercise addresses the question of whether an increase in royalty rates by the Department of the Interior will increase or decrease government revenues. The CEA’s answer to the question is that it will increase them.

However, the conclusions reached by CEA in arriving at its answer show a complete disconnect between its theoretical modeling results and the way the real-world coal marketplace functions. The CEA therefore misconstrues the outcome of such a policy change and its report must not be relied on.

As an example of the problematic nature of the report, one of the CEA’s conclusions is that increasing the cost to produce coal under federal leases (which mainly occurs in the Powder River Basin) through higher royalty payments will raise the market price of coal nationally. This conclusion is incorrect, and it demonstrates a failure to appropriately analyze the competitive market forces at play in the various coal-producing regions of the United States, as well as the broader energy marketplace in America.

These market forces include competition between coal and natural gas to supply fuel for America’s power plants. Coal has been the backbone of our country’s affordable, reliable electricity system and is currently the fuel source for about 35% of total generation. Over the course of time, natural gas prices have proven to be both higher and much more volatile in price than coal.

The graph below from the Energy Information Administration (EIA) shows the importance of coal in terms of both its low price and price stability in comparison to natural gas, on a dollars per million Btu basis. 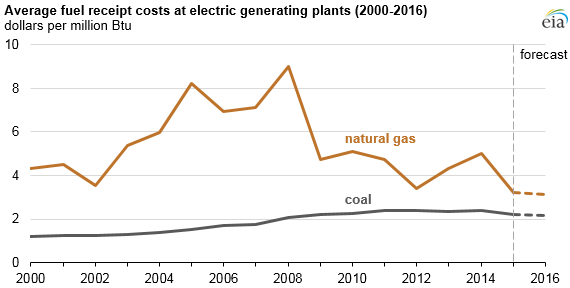 A study by IHS Energy on the value of U.S. fuel diversity for electricity supply included a case with reduced diversity using a generating mix of assets without significant amounts of coal and nuclear power, and with a correspondingly greater share of generation from natural gas plants.

In this reduced fuel diversity case, IHS found that the cost of generating electricity was more than $93 billion higher per year and the potential variability of monthly power bills was 50 percent higher than in the base case. In the reduced diversity case, a typical household’s annual disposable income was reduced by about $2,100, U.S. Gross Domestic Product was reduced by nearly $200 billion, and over one million jobs were lost compared to the base case. These dramatic findings did not include any additional costs in the event power plants are shut down prematurely and must be replaced.

Premature shutdown of coal-consuming plants is a trend already occurring due to the influence of an increasing number of environmental regulations promulgated for such plants. The robust marketplace competition that exists between coal and natural gas will be significantly changed as more coal plants are shut down and new ones are not added to the system. The graph below from the Department of Energy’s Energy Information Administration is a snapshot of scheduled electric generation capacity additions and shutdowns for 2015, and clearly shows the net reduction in coal capacity. 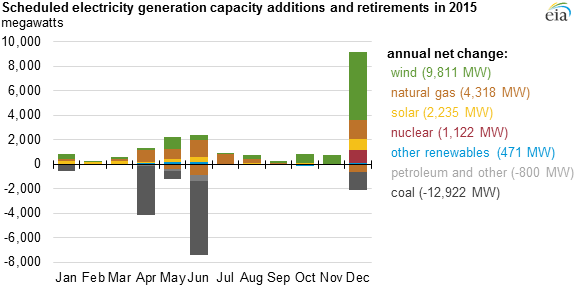 If this trend continues, as expected, coal demand and production will drop. Natural gas demand will increase, bolstered by the build out of new natural gas capacity underway. These conditions will lead to higher natural gas prices and coal will be less available to buffer higher gas prices and gas price spikes.

The stage is set for higher electricity costs for American households and businesses. This could occur because of a change such as a royalty rate increase on federal coal that raises the cost to produce coal, or as a result of factors pushing the U.S power generation fleet’s continued shift away from coal and forcing its heavier reliance on natural gas.

With coal already under extreme market and regulatory pressures, changing the royalty rate structure and terms to make it more onerous for coal mining companies will not generate increased revenue for states. The economics are clear. Coal investment would be reduced and the amount of coal mined on federal lands would decrease.

That means fewer federal and state revenue dollars and a lower, not higher, return for taxpayers. And while not improving the lives of everyday Americans, such a policy change would be devastating to an industry already burdened by weak markets and oppressive governmental regulation.

It would be a grave mistake for American consumers and taxpayers to believe that increasing royalty rates under the federal coal program will be beneficial for them. Whether through increased electricity costs due to the changing marketplace dynamics described above or fewer federal and state tax dollars generated through the federal coal program, Americans will not benefit. Thus, raising the coal royalty rate or otherwise increasing the cost of coal production would be a poor policy choice on the part of BLM.

Additionally, the Mineral Leasing Act (“MLA”) obligates BLM to promote mining of coal and provide for the maximum economic recovery for coal mined on federal lands. This is paramount as many of the reforms BLM is considering could be in direct conflict with BLM’s obligations as a steward of federally owned natural resources. Lower coal production correlates to lower economic recovery both in federal royalties and local taxes. In fact, the case could be made for reducing the royalty rate. In fact, higher tax revenues would be far more likely under such a scenario.

In consideration of other economic provisions that would be both beneficial and more equitable to coal producers, BLM should consider basing bonus bids on the amount of recoverable coal rather than the amount of coal reserves, and changing the revenue collection for bonus bids from collecting up-front payments associated with bonus bids over five years to pay-as-you-go bonuses as coal is produced from the reserve.

Delays related to the mine permitting process mean that permitting can take seven to ten years in the United States, far longer than other advanced economies with similar environmental standards. Permitting is facilitated by efficient, timely review and effective coordination between federal and state agencies. Delays add barriers and costs to mining, and are increasingly a disincentive to coal production.

Some organizations and individuals have suggested the federal coal leasing program should be changed to address environmental concerns and climate impacts, but such reform is unnecessary. Leases already undergo multi-layered reviews prior to approval, and climate effects are already subject to review under the NEPA process.

Below are two pages from the Bureau of Land Management’s PowerPoint presentation for the 2015 Federal Coal Leasing Program national listening sessions that provide a high level overview of the steps that must be taken during the federal coal leasing and mining processes. 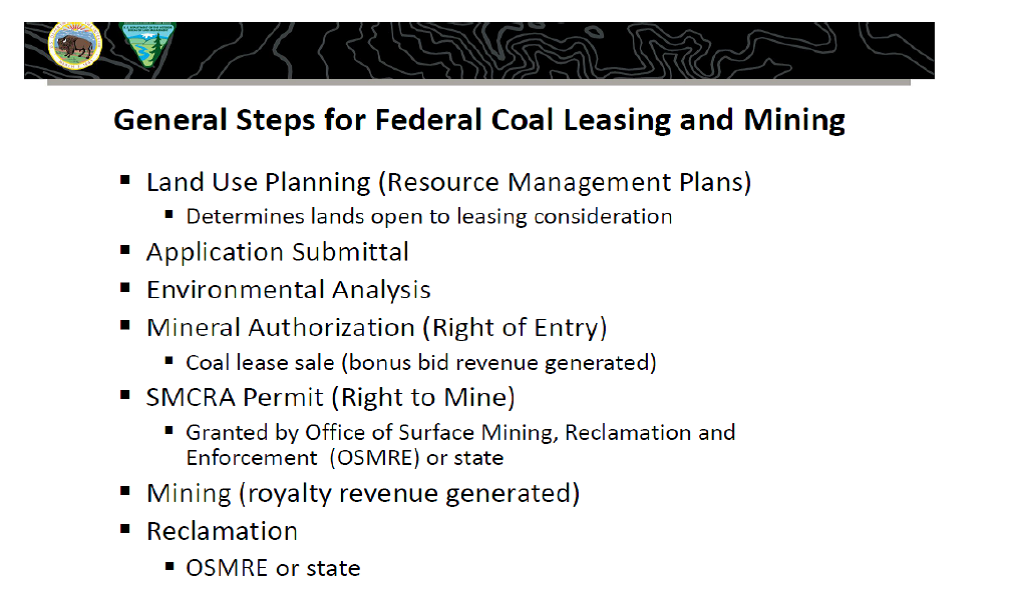 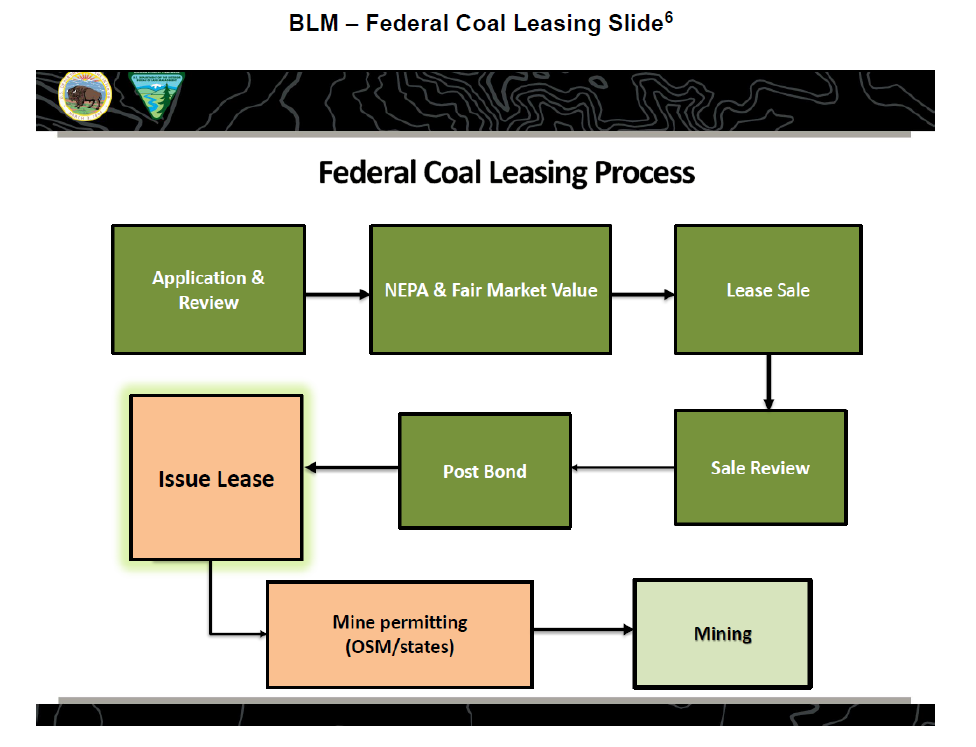 As to those who continue to suggest that climate change must be addressed, that suggestion typically has little or nothing to do with how comprehensive the mine permitting process is. Rather, the goal is to keep coal in the ground. This is completely in conflict with the Mineral Leasing Act and BLM’s charge to promote mining and provide for the maximum economic recovery for coal mined on federal lands. In any event, injecting environmental policy into this process is clear perversion of BLM’s statutory obligation to promote coal use and maximize leasing revenues for taxpayers.

The step taken by the Secretary of the Interior in January 2016 to impose a moratorium on new federal coal leases is incongruent with the status of the federal coal leasing program. This program is not broken, and no pause is needed. Also, recent reports from the DOI Office of Inspector General and the Government Accountability Office did not address royalty rates.

The federal coal leasing program continues to be a success for America, contributing nearly $12 billion over the past ten years from royalties, rents, bonuses, and other payments according to BLM. The proceeds are split between the federal and state governments and support essential infrastructure and local schools. For many states with major fiscal challenges, reduced tax dollars are already a reality due to the surging number of regulations resulting in decreasing coal production. The prospect of further declines in tax revenues due to changes in the federal coal leasing program is a very serious concern for them.

Unnecessary regulations and reforms targeted at coal are already devastating coal communities. The coal industry has lost more than 45,000 jobs in the past three years. These are good jobs, jobs that people care about, and jobs in an industry that strongly believes in its contributions to the economic success of America and the well-being of our citizens.

The federal coal leasing program is adequately ensuring that taxpayers receive a fair return. Multiple reviews by federal and state agencies ensure that the environmental protections are adequate. Indeed, they are world class. At the very least, and in order to fulfill the obligations under the Mineral Leasing Act, the Department of Interior and the Bureau of Land Management should continue the current federal coal leasing program without any modifications.

Betty B. Monseu is CEO of the American Coal Council located in Washington, DC. Full documentation with these comments can be found at here.