A Federal Energy Board? (Hofmeister’s Idea Is Old, Bad)

“Fundamentally, what is to stop a FEB from supporting an energy rationing scheme, say a carbon tax or CO2 cap-and-trade program, to ‘save the climate’ or ‘level the playing field’ for wind, solar, and other beggar energies? Hofmeister might oppose such programs, but a FEB is ‘independent’ to do so. Anti-energy forces such as the “green lobby” and current Washington establishment will not surrender or retreat but likely become emboldened by centralized power in a federal energy board.”

John Hofmeister, formerly president of Houston-based Shell Oil (the U.S. side of Royal Dutch Shell), has been an active voice for energy policy reform. Upon retiring from Shell in 2008, he founded Citizens for Affordable Energy (CAE), an educational nonprofit advocating “sound U.S. energy security solutions for the nation, including a range of affordable energy supplies, efficiency improvements, essential infrastructure, sustainable environmental policies and public education on energy issues.”

Hofmeister identifies current energy policy as disjointed and broken, the result of “13 executive branch agencies govern[ing] energy and the environment … 26 congressional committees and subcommittees writing legislation on energy … [and] every federal district court hav[ing] authority to delay and ultimately prevent citizens from having the energy they need.”

“By 2020,” he warned in 2010, “there will be inadequate supplies of liquid fuels and electricity taking the nation toward inevitable gas lines, brown-outs, black-outs and extraordinary high prices.” This “energy abyss will stick around for up to a full decade with all of the national insecurity, economic decline, joblessness and social malaise that accompanies energy shortages in third-world countries.”

Hofmeister’s solution to avoid the 2020–2030 chasm is to rapidly produce much more energy from new infrastructure. His means is a new federal authority, a federal energy board (FEB), to “determine the amounts and relative percentages of the future supply sources of America’s energy.” [1] His model is the Federal Reserve Board of Governors (est. 1913) under which independent appointees run the agency rather than elected officials.

In search of broad public support, Hofmeister’s supply-side strategy mixes pro-development and all-of-the-above. Yet he still plays to the center. He is pro-fossil fuels but disparages “drill, baby, drill.” Windpower gets carte blanche: “[W]e should develop it as fully as we can.” [2] Solar? “Let’s see what can be done.” [3] Biofuels—the same. Overall? “The U.S. government has rightly chosen to jump-start various efforts in the interests of the nation.” [4]

Hofmeister’s energy plan can be boiled down to you-get-yours, we-get-ours. [5] Yet this something for everyone—and thus special favor for politically-correct, economically-incorrect energies—will only exacerbate federal budget deficits and burden consumers. It is a recipe for continued politicization, not fundamental reform.

Hofmeister has a very romantic view of how an all-powerful energy board could both identify and implement the “right” energy policy. In his words:

[T]he nation should … implement deliberate, sound energy supply strategies based on the sources the Federal Energy Resources Board recommends, considering availability, affordability, and environmental sustainability…. A comprehensive and coherent energy supply plan would be created to take into account the nation’s short-, medium-, and long-term energy and environmental future, defined in the years and decades of energy time. [6]

Hofmeister instructs his board to do just about everything:

Hofmeister’s “supply-side energy management” is a half-century strategy (out to 2060), which he sees as balancing “continued affordability with environmental improvements.” [8] He assumes, dangerously, that the federal energy plan will move toward “de-carbonizing our entire energy supply system.” [9]

There is no reason to believe that the Federal Energy Resources Board could not balance its regulatory authority with the business and competitive needs of energy production and environmental protection to address the national energy supply-side interest. [10]

The notion of an Objective Good economically and ecologically is a fatal conceit that free-market economist and social philosopher F. A. Hayek warned against:

The curious task of economics is to demonstrate to men how little they really know about what they imagine they can design. To the naive mind that can conceive of order only as the product of deliberate arrangement, it may seem absurd that in complex conditions … adaptation to the unknown can be achieved more effectively by decentralizing decisions…. Yet that decentralization actually leads to more information being taken into account. [11]

His (age-old) quest to centralize government for greater efficiency must confront history. In 1977, the Department of Energy was founded by President Carter to consolidate “most Federal energy activities under one umbrella” to create “the framework for a comprehensive and balanced national energy plan.” DOE’s mission creep and bad decision-making in the last 35 years have added to, not subtracted from, energy challenges. [12]

Fundamentally, what is to stop a FEB from supporting an energy rationing scheme, say a carbon tax or CO2 cap-and-trade program, to “save the climate” or “level the playing field” for wind, solar, and other beggar energies? Hofmeister might oppose such programs, but a FEB is “independent” to do so. Anti-energy forces such as the “green lobby” and current Washington establishment will not surrender or retreat but likely become emboldened by centralized power in a federal energy board.

Consider the policies of the Federal Reserve Bank itself. Milton Friedman, studying the Fed’s actions before and during the Great Depression, observed:

Mistakes, excusable or not, cannot be avoided in a system which disperses responsibility yet gives a few men great power, and which thereby makes important policy actions highly dependent on accidents of personality. [13]

Hofmeister’s analogy of a FEB modeled on the Federal Reserve Board of Governors is peculiar. The Fed has a legal monopoly over its product (legal tender) and has presided over the very booms and busts it was created to prevent. The energy industry is privately owned, is competitive, and needs less, not more, politics to dampen its business cycle. [15]

Finally, consider today’s real energy revolution, much of which has occurred since Hofmeister’s 2010 speech. Hydraulic fracturing and directional drilling on private and state lands has opened up vast energy resources. Instead of having inadequate supplies of liquid fuels by 2020, the United States will surpass Saudi Arabia and Russia this year as the world’s largest producer of liquid fuels.

This turnaround in domestic liquid fuel production didn’t happen because of an enlightened board, but because of entrepreneurs. And, in fact, an NEB might have become a more effective battleground for anti-frac forces to stymie natural market incentives.

Still, Hofmeister’s concern about all of the red tape on federal lands is accurate. The frac revolution isn’t happening on federal land but on private and state land, because of red tape. Indeed, the federal government takes 307 days to process a permit to drill compared to 27 days in Colorado and 10 days in North Dakota. State governments understand that energy production and environmental production can co-exist. 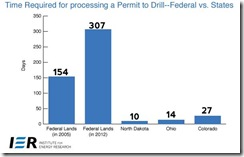 “If there is any lesson in the history of ideas,” stated Thomas Sowell, “it is that good intentions tell you nothing about the actual consequences.” An NEB cannot insulate the market from government. And in our age, it could fast-track statism in the name of stabilizing climate or balancing the budget. History, in fact, cautions against centralizing government power. [16]

In place of simplistic, lowest-common-denominator thinking, John Hofmeister and Citizens for Affordable Energy should educate people about the need for depoliticizing energy. As the example of hydraulic fracturing demonstrates, the United States does not need a federal energy board, a national energy plan, or an all-of-the-above energy policy.

A new message from Hofmeister, anchored on sound theory and energy reality, is needed to help replace anti-energy ideology with pro-energy, pro-market thinking outside and inside government.

Note: This is a revised, enlarged version of an earlier essay with the same title published by the Institute for Energy Research.

[4] Ibid., p. 46. He adds that these subsidies should be withdrawn “over time … as commercial development unfolds.”

[5] Hofmeister (“Straight Talk from An Insider,” OTC 2010 Newsletter, May 4, 2010, p. 3) complains about “an aging infrastructure, decades of restrictions on drilling, failure to tackle the obstacles that prevent both more nuclear plant and clean coal plant projects, frittering at the edges of renewable energy” as if economics did not require choices between different technologies and investments. Nuclear, renewables, and clean coal projects are political, taxpayer-dependent technologies, yet Hofmeister wants to somehow take the politics out of energy and make “‘hard choices’.”

[9] Ibid. While the hydrocarbon age is growing more entrenched, the intellectual case behind climate alarmism has weakened.

[12] During the Reagan Administration, voices within the industry proposed to create a cabinet-level Council on Energy Mobilization to fast-track permits for major non-nuclear energy projects. The Energy Mobilization Act of 1981 died in committee, however. See Bradley, Edison to Enron: Energy Markets and Political Strategies (2011), pp. 343, 518.

And in 1939, the U.S. Department of Interior issued a report for FDR to expand the federal presence with oil and gas on both private and federal lands.

Immediate steps on the part of the government toward formulation of a national energy resources policy in the interest of national defense, conservation and economic betterment,” the report said. “We propose … to administer the Federal interest in the oil and gas industry and to make necessary rules and regulations covering the production of and commerce in oil and gas.