Part I of this series critiquing an article by Chuck Kleekamp dealt with the more general issues of examples used, one of the major references and electricity markets. There is a lot found to question his analysis. This post focuses on capacity considerations and other miscellaneous issues raised by Kleekamp. Finally, Part III addresses his remarkably inappropriate warning, “If you think wind power is expensive, wait till you have to pay for electricity from a new nuclear plant.”

Availability of Other Generation Capacity

Kleekamp cites the extensive unused capacity in the total electricity system that he claims is available to balance wind. He is incorrect in this notion. This capacity provision is normal, and it is there for a purpose. One of the reasons is the need for reserves as described in Part I and represents about 20% of total capacity.

Another reason is the nature of electricity demand. A large number of plants are used only to meet daily demand rises and peaks, at which point they are all committed, albeit some to reserves. The “excess capacity” is therefore not available for other purposes, which would make it unavailable for its primary, important purpose. It would be “robbing Peter to save Paul”.

Contrary to Kleekamp’s view, the introduction of wind capacity results in additional capacity that would not otherwise be required. This is recognized in Germany by the German Energy Agency (dena) and a major electricity supplier E.ON Netz, where the capacity credit for wind is established in the area of 8% of installed wind capacity for 2007. This means redundant capacity of 92% of wind capacity must be added to system requirements.

Wind capacity credit decreases with increased wind penetration, and the projection for Germany is that even higher levels of redundant capacity result. This appears to be at odds with one of the findings of the EnerNex study described above, and is supported by the European Wind Energy Association (EWEA see pages 122-124 and Figure 34).

Table 1 below shows the relevant information for Germany based on the above referenced dena and E.ON Netz reports. Note particularly the wind penetration levels and the constant low level of wind capacity credit. 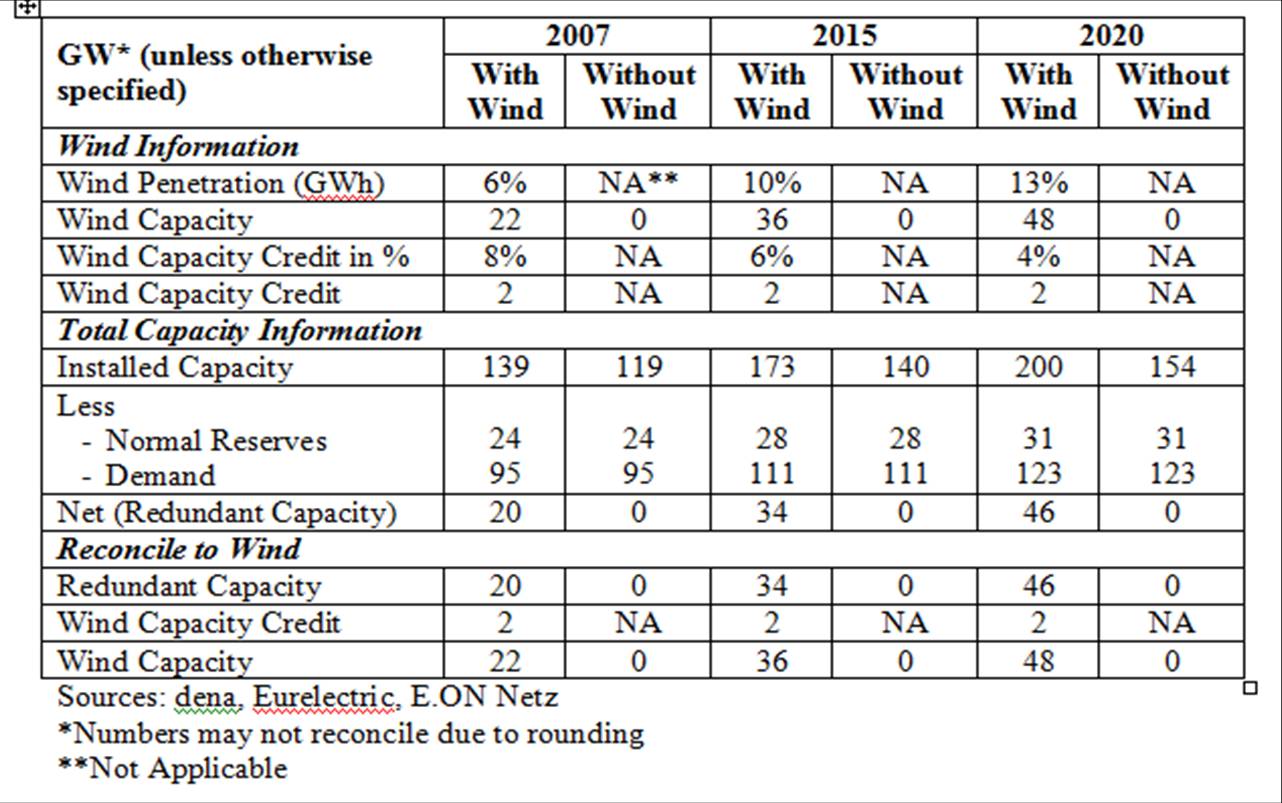 This table should be read as follows using 2007 as an example:

Most of the future growth in wind in Germany was to be in offshore installations. To date this is effectively zero, which is no surprise given the outlook for wind’s costs, effectiveness and usefulness.

Of course, utility-scale storage, with large capacities, fast charge and discharge responsiveness, lengthy discharge duration and not relying on imported materials would address wind’s volatility. Impounded hydro represents the best approach, but is still quite limited. Apart from the fact that this is not feasible in the foreseeable future, think many decades, it is not likely that a wind/storage combination would the optimal solution in this time frame anyway. The implementation of large utility-scale wind plants with the future expectation of such a capability is “putting the cart before the horse”, to say nothing of the additional costs.

The availability of pumped storage, a form of impounded hydro, in New England is notable, but is marginal because of (1) other uses, which may have “fill” timings not consistent with wind production, (2) limited expansion opportunities (think of the permitting process required) and (3) likely cycling limitations.

For more information on storage see the references in this note.[i] MacKay provides a fairly comprehensive approach, but he still misses the important difference between one to two daily demand increases and the continuous, significant volatility of wind. It like saying that because I can demonstrate that I can do one push-up means I could do 30 or 40, or more, repeatedly.

Similarly looking to electric transportation solutions, especially electric cars, is a distant reality, first in the uptake of such vehicles in the market to meet currently projected wind implementations, and second the required development and engineering of the transportation and electricity infrastructures to ensure its feasibility is an equally challenging and distant process, to say nothing about costs. This approach is worthy of pilots, research and experiment but not commercialization. This is another case of getting ahead of ourselves.

Kleekamp raises the claim that offshore breezes better match the daily electricity demand profile contrary to that for onshore wind plants. Regardless of whether or not this is true, it is an example the too-prevalent practice of wind proponents to raise issues that, given the very large investments required for wind, are not central and more in the category of red herrings, or even clutching at straws.

There must be a reason why offshore wind plants have not been aggressively pursued by those with the most experience with wind turbines, for example Germany. Even the recent “recommitment” to offshore by Denmark must be seen in context. The move to offshore in the UK is questionable and has not lived up to promises, as will be discussed further in Part III. The answer lies in cost, reliability, maintenance, the hostile environment and the general ineffectiveness of wind plants, whether onshore or offshore.

As other of his arguments fall away, this remains a very weak consideration, at best.

Kleekamp raises some further issues in his conclusions.

The advance of wind in those countries where this has occurred is not due to confirmation of wind as a replacement fuel as he claims, but by heavy government subsidization of wind (on an watt-hour produced basis as opposed to aggregate levels) without which extensive wind implementation would not have occurred. The author’s statement is like saying that the increase in fast food consumption is evidence that it is beneficial.

Because it is a realistic concession to the reality of wind integration, Kleekamp’s suggested use of gas plants with fast ramp rates is interesting, but apparently this is without looking further into its details and implications. First, this represents duplicate capacity as shown above. Second, because it would require a major fleet of new gas turbine plants, especially those of the Simple Cycle Gas Turbine type (SCGT, or variously as OCGT or CT), which are capable of balancing wind but are considerably less efficient. Given the resulting inefficiencies involved (cycling and the increased use of SCGT plants), using gas turbine plants alone without wind would allow the employment of the more efficient, but less flexible, Combined Cycle Gas Turbines (CCGT). The result would be more fuel savings and fewer emissions than the gas/wind combination, as described here.

Manufacturers are promoting new gas turbine types with more responsive capabilities. This must be carefully examined in the context of wind volatility, as opposed to contributing more to the efficient support of normal systems operations (i.e. without wind). Suggestions of applicability to wind balancing may not be realizable. Should these prove helpful in balancing wind, major investments would still be required, and again these would likely perform better without the presence of wind.

Kleekamp’s article is like most wind proponents’ approach. It works around the margins of the issues, and does not provide realistic, optimal solutions for reliable electricity, emissions reductions and sustainable and meaningful jobs. It does not prove the case for wind and does not disprove that of wind opponents.

Part III will complete this series by examining the costs of wind and nuclear generation sources in more detail. Kleekamp’s apparent warning of higher costs for nuclear versus wind are not warranted.

[i]Readers are directed to the following as starting points in gaining the necessary understanding of the issues of utility-scale storage:

(b) MacKay, David (2008). “Sustainable Energy – without the hot air”. http://www.withouthotair.com/download.html

(c) For an overview of technologies see the Electricity Storage Association article at http://www.electricitystorage.org/site/technologies/

(d) On the advocacy side, there is an article in the September 2010 issue of Power magazine entitled “Bulk Storage Could Optimize Renewable Energy”. It is written by Jason Makansi, executive director of the Coalition to Advance Renewable Energy through Bulk Storage. It also chronicles the many problematic issues with wind production. Suggested solutions should be considered within the broader context of the first two recommended books.