Economics and Performance – The Primary Deficiencies of Wind Power

[Editor’s note: Mr. Graf’s cash flow analysis of wind power projects is presented as another view of the inappropriateness of planned public policy in the electricity sector. The economics of wind power is a broad topic; previous posts at MasterResource are listed at the end of this post. For general problems of industrial wind, see here.]

There are many arguments to be made against government subsidization of industrial wind power, some objective and others subjective. We hear about noise, shadow flicker, disruption of wildlife, lack of consistent energy output (intermittency), questionable performance with respect to pollution reduction, and undesirable aesthetic appearance.

It occurs to me, however, with regard to subsidies for energy ventures and technology, three things must be kept in mind:

(1) any good investment must be made in worthwhile ventures that can show a reasonable return;

(2) arbitrarily subsidizing some ventures may cause inadvertent (or advertent) exclusion of others; and

(3) jobs cannot be created by subsidizing ventures that do not provide a viable return. We must keep our eye on the economic ball, and structure our primary arguments against government subsidies for wind power generation around the primary deficiencies of wind turbine technology: performance and return on investment (ROI).

It is obvious that any good investment must be made in worthwhile ventures that can show a reasonable return; and I believe it is fairly apparent that placement of wind turbine power generation technology in my home state of Ohio, vast areas of the eastern or mid-western United States, and indeed in most places in the continental United States, is not worthwhile.

Given the average annual wind speed limitations in most areas, and the relative inefficiency of wind turbines to transform wind into useful electrical power, the wind turbine technology we are subsidizing cannot produce enough electricity to be competitive with other more viable forms of generation, even when a generous allowance for future inflation of electricity costs is considered. The investment is being wasted; with no hope of a reasonable return, and without large subsidies from government entities to offset the investment losses and artificial increases in the cost of electricity, a viable business case for implementation of wind turbine power generation cannot be made.

To illustrate the economic shortcomings, I can point to specific high profile wind development projects I have analyzed in the past several months, including the Great Lakes Wind Energy Pilot Project in Ohio, the Highland Wind Farm expansion in Pennsylvania, and the Glacier Hills Wind Farm in Wisconsin.

The pertinent pieces of information required for the analyses are the power curves for the specific wind turbines, information regarding annual wind speed at the approximate elevations at the sites, and estimates of uptime and operation and maintenance (O&M) costs. This information seems simple enough, but is often difficult to gather because reports are often incomplete and conflicting with regard to economic details (begging the question, “Why?”).

Also, to apply a value to the electricity produced, I have characteristically used an approximation of the average wholesale price of electricity, which has been around $50/MWh for 2009-2010, and has been fairly consistent on an annual weighted average basis throughout the continental United States. It may be noted that the wholesale price of electricity varies widely on a daily basis depending on supply and demand, and also that certain forms of production are inherently more costly.

For example, Open Cycle Gas Turbine (OCGT) production is specifically designed to be fast reacting to peaks in demand and electricity generated in this manner can be sold for greater than $100/MWh when in demand. It makes sense to me, however, to use the average everyday wholesale price when analyzing the business case for a production system that is being touted as able to produce average everyday energy needs and to displace conventional average everyday production sources.  It would not make sense to evaluate wind turbines based on a cost comparison to a fast reacting OCGT system which is designed to be responsive to peaks in demand; wind turbines could never serve in this capacity.

Once the basic simple information is obtained, the analyses for these projects are fairly straight forward, and the details are presented in the attached charts and figures in the Technical Appendix. In all three cases, it is quite apparent that the wind turbines cannot produce enough electricity to return the investment and pay the annual operating and maintenance costs.

Other points that should be made to further the arguments are [not included are the costs of required additional transmission facilities]:

As another example of poor economic performance, the largest loser I have reviewed to-date is the massive Cape Wind Project in Massachusetts. The pertinent information regarding the specific wind turbines to be employed is difficult to come by (again the question, “Why?”) and my analysis is not as detailed; however, from published information the Cape Wind Project is supposed to produce three-quarters of the 230 MW power demand of the Cape and islands, which means a real average output of 172.5 MW, or about 41% of the rated 420 MW capacity.

Applying a generous assumption of 85% uptime means the turbines will operate 7446 hours per year; giving us 172.5 MW x 7446 hours = 1284 GWh/year. This estimate is actually more-or-less confirmed, within about 11%, on the Cape Wind website itself; which currently offers an updating display indicating that about 11,588,000 MWh of energy could have been produced since wind monitoring commenced. This seems like an impressive number until you divide it by the 8+ years of monitoring, and you get 1449 GWh/year.

Considering the annual average wholesale value of electricity in Massachusetts is also about $50/MWh per the DOE EIA, the annual energy generated by Cape Wind will be worth about $70 million per year; and subtracting annual operating and maintenance costs may leave about $50 million per year of this revenue. Again, this sounds impressive, until it is compared to the $2 billion that the project is expected to cost.

Even if a generous inflation rate is applied to the cost of electricity, the cash flow will not even come close to a return of this investment in the life of the wind turbines; unless someone deliberately raises the cost we pay for electricity. Unfortunately, this is already happening because a New England based utility company, National Grid, has already agreed to pay $207/MWh (4 times the current wholesale price) beginning in 2013 for half the power produced by Cape Wind.  National Grid is doing this to comply with a state law forcing them to purchase a certain amount of power from “renewable energy” sources, and the deal is considered critical to attract investors.

Exclusion of Other Ventures

Other than the harm to the national economy of the waste itself, the real problem with expending resources subsidizing non-viable wind turbine projects is that this inadvertently (or advertently) diverts resources from other efforts to improve our energy production strategy.

Because of recent events, we are hearing quite a few emotional comments regarding the need to reduce U.S. dependence on oil; and the recent tragic spill in the Gulf of Mexico is being used to justify investment in wind energy projects. However, it is reasonable to point out that oil is used to generate about 1% of the total electricity used in the USA, and one can effectively say that oil has nothing to do with the generation of electricity. Unfortunately, by increasing the cost of electricity, it is likely that we will make it more difficult to transition away from oil given that this fossil fuel is used for home heating and gasoline powered automobiles.

Also, in the rush to promote wind generation, development and improvement of other more viable means of energy generation are being ignored.  Instead of diverting resources to prop up wind projects we could be improving natural gas, nuclear, and coal generation.  We could also be improving the distribution system (grid) to reduce losses and improve reliability. Further, by subsidizing and offsetting the current deficiencies of wind generation, we take away the incentive to make the necessary improvements that might make it viable in some cases in the future.

Tying back to point (3) regarding job creation and going beyond the specific arguments regarding the performance of the wind turbines themselves, I will point out that proponents for subsidized implementation of wind turbine power generation believe that this activity will create “green jobs.” I contend, however, that creation of jobs by subsidizing ventures that do not provide a viable return cannot work, and job creation cannot be a justifiable end unto itself.

This is simply an extension of the points I have made in the preceding paragraphs, and I will use an old tried-and-true analogy to make my point. If we wanted to simply create jobs, we could employ people to dig holes in the ground for no particular reason, and then employ other people to fill those holes in. By purchasing large earthmoving equipment, we could dig really big holes really fast, and stimulate employment at the manufacturing companies that make the earthmoving equipment and their steel and component suppliers.

Now, if we dig holes in both Ohio and Wisconsin, we could transport the dirt from Ohio to fill in the holes in Wisconsin, and conversely transport the dirt from Wisconsin to fill in the holes in Ohio. This would stimulate employment in the transportation industry for truck drivers and for truck manufacturers. The wear and tear on the roadways would also stimulate the need for road maintenance workers and all their equipment.

The analogy is facetious and I apologize for digressing into the absurd; however, I believe it illustrates my point that making jobs by subsidizing non-viable ventures cannot be an effective strategy.

Keeping in mind the three principles that good investments must be made in viable worthwhile technologies, that we will be risking detrimental effects on ventures that are not being subsidized, and that job creation cannot be an end unto itself; it seems we need to coordinate the arguments against subsidies for wind power generation about the economic analysis. These are the easiest arguments to understand, and I believe these arguments will hit home for the majority of people. Other more in-depth technical analysis and subjective arguments will always be valuable and must be developed and presented as well; however, by keeping our eye on the economic ball, and clearly educating the investors and the public about the primary economic and performance deficiencies of wind power generation, we may be able to succeed in correcting the course of public opinion on this issue.

The basic economic analysis of the aforementioned Great Lakes Wind Energy Pilot Project in Ohio, Highland Wind Farm expansion in Pennsylvania, and Glacier Hills Wind Farm in Wisconsin are provided in detail in the next section. As previously indicated, with revenues based on realistic wholesale electricity costs, the cash flow analyses demonstrate that these projects will not break even within the projected 20 year period.

Jerry Graf has held engineering positions in industry for the last 27 years. The holder of Bachelor of Science and Master of Science degrees in Mechanical Engineering from the University of Akron, Mr. Graf is a founding member of the Mechanical Engineering Advisory Council at the University, and currently serves as the Council’s Vice-Chairman. His current interest is studying the technical aspects of wind power. 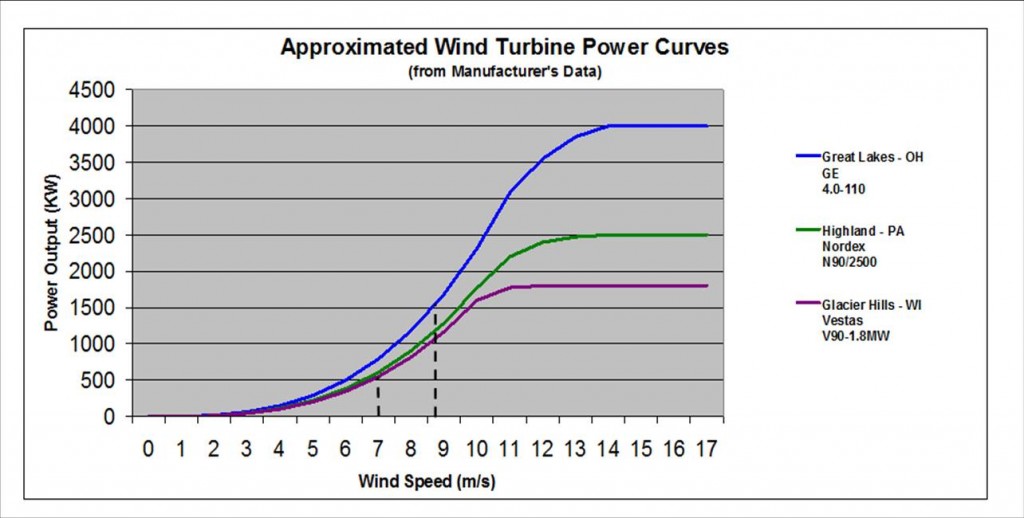 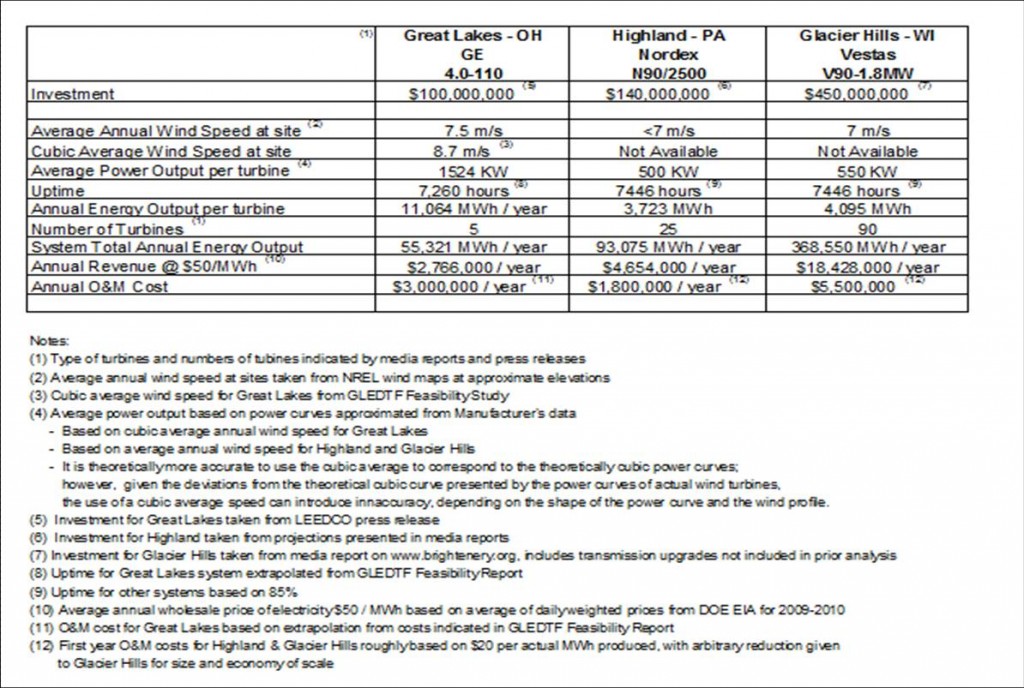 The following are links to other MasterResource essays on economic issues:

Windpower: Response to a Comment (on 4 cent/kWh wind and interfuel subsidies)

Federal and New York Officials Reward Spain’s Iberdrola at the Expense of the U.S. Taxpayers, Job Seekers, and Electric Customers