[Editor’s note: Parts I and II set the stage for the development of some conclusions about how much wind electricity Denmark exports, which will be provided in this post. The impact of wind on CO2 emissions  is addressed in Part IV]

To further reduce the total amount of information to a more manageable level, the following is a look at this from the point of view of Denmark’s electricity import/export flows for the most recent “normal” year (2004), dry year, (2006), and a wet year, (2007), these conditions being the main driver of exports. This is shown graphically in Figures 1-3, starting with a normal year. In these charts numbers may not exactly balance due to rounding. Note in particular the net export levels, which are typical for each type of year.

It must be remembered that most of these activities can take place at different times during the year, month or day. For example wind generation is usually strongest at night so Norway and Sweden could be taking Danish wind at night and delivering hydro-generated electricity during the day. Alternatively, Nordic hydro-generated electricity could be being used extensively to balance the remaining large amount of Danish wind for domestic consumption within Denmark or export to Germany.

As Figure 1 shows, in normal years, the flow through Denmark is relatively balanced between imports and exports with its electricity trading partners. 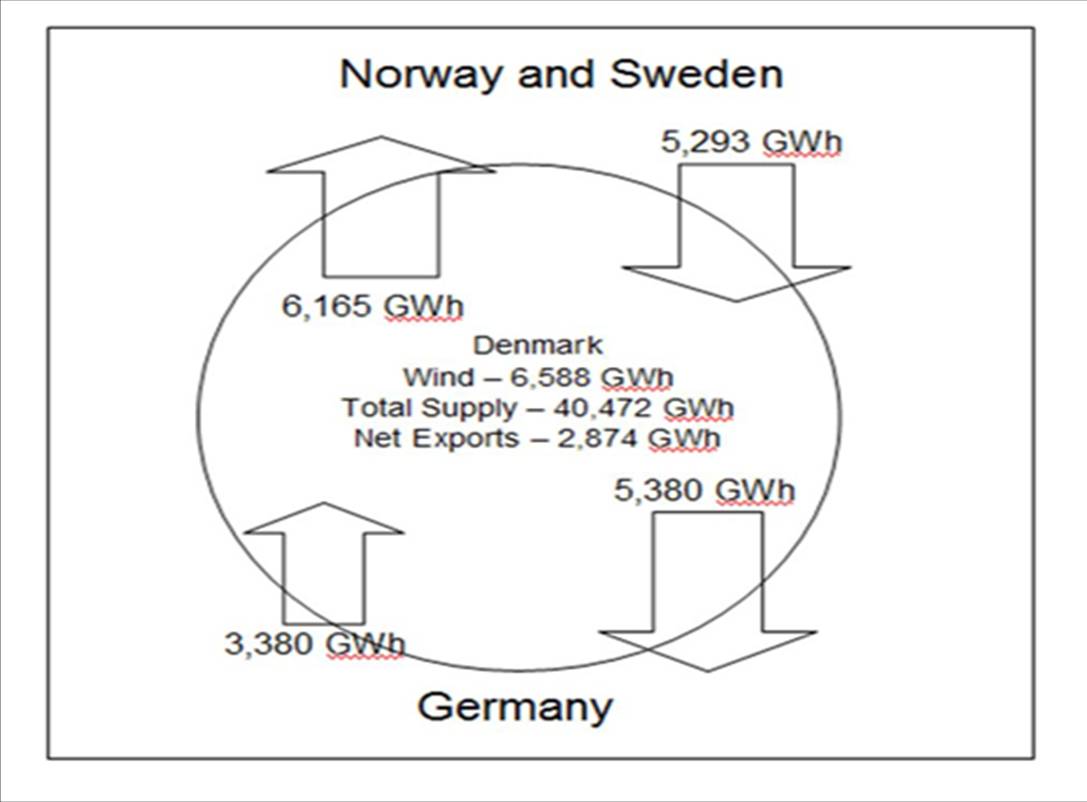 Figure 1 – Danish imports and exports of electricity in 2004, in a normal year, that is when there are not significantly wet or dry conditions in the Nordic region.

As well Nordic hydro flows to Denmark and Germany, and the opportunity exists for Danish fossil fuel electricity to be exported to Germany, and possibly some wind. Wind-generated electricity used domestically within Denmark is possibly balanced by Norway/Sweden hydro imports. Again, exports to Germany could be Danish wind “firmed” by Nordic hydro. Net export levels tend to be between those for wet and dry years.

In wet years the north to south flow of electricity is stronger, as shown in Figure 2. 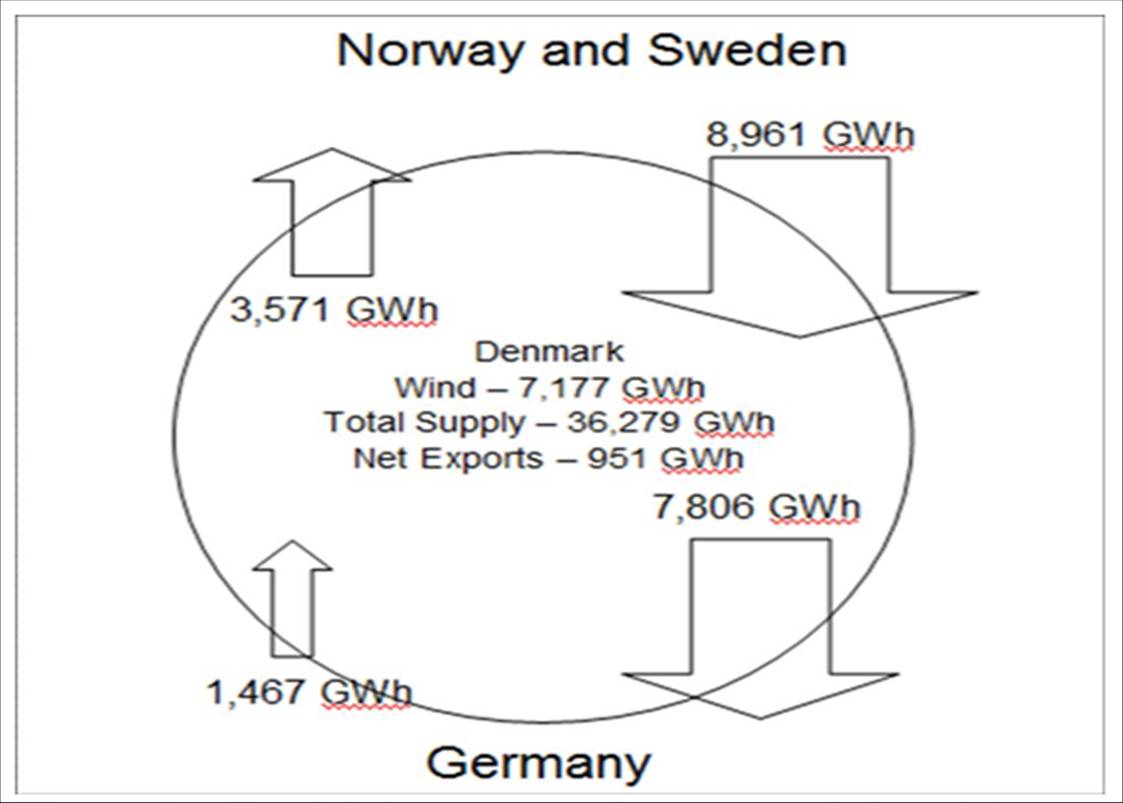 Figure 2 – Danish imports and exports of electricity in 2007, a wet year with Nordic water reservoirs full.

The exports from Denmark to Norway/Sweden could easily all be from wind-generated electricity in Denmark. Bach calculates that only about 48% of wind from West Denmark is exported. Wind in Denmark can be balanced with hydro from the north.

2007 was a year of high winds. In this year Denmark is still a net exporter of electricity, but only just. There is an opportunity to export a maximum of only about 50% of its wind-generated electricity to Norway and Sweden, leaving almost 10% of total supply to be handled domestically, or some exported to Germany. As it is a wet year and Nordic water reservoirs are full, there is a flow of hydro-generated electricity from there to Denmark and Germany.

There are two questions not easily answered, which are illustrative of similar questions for all year types:

Figure 3 looks at a recent dry year, 2006, and Denmark is a strong exporter of electricity. It was also not windy. 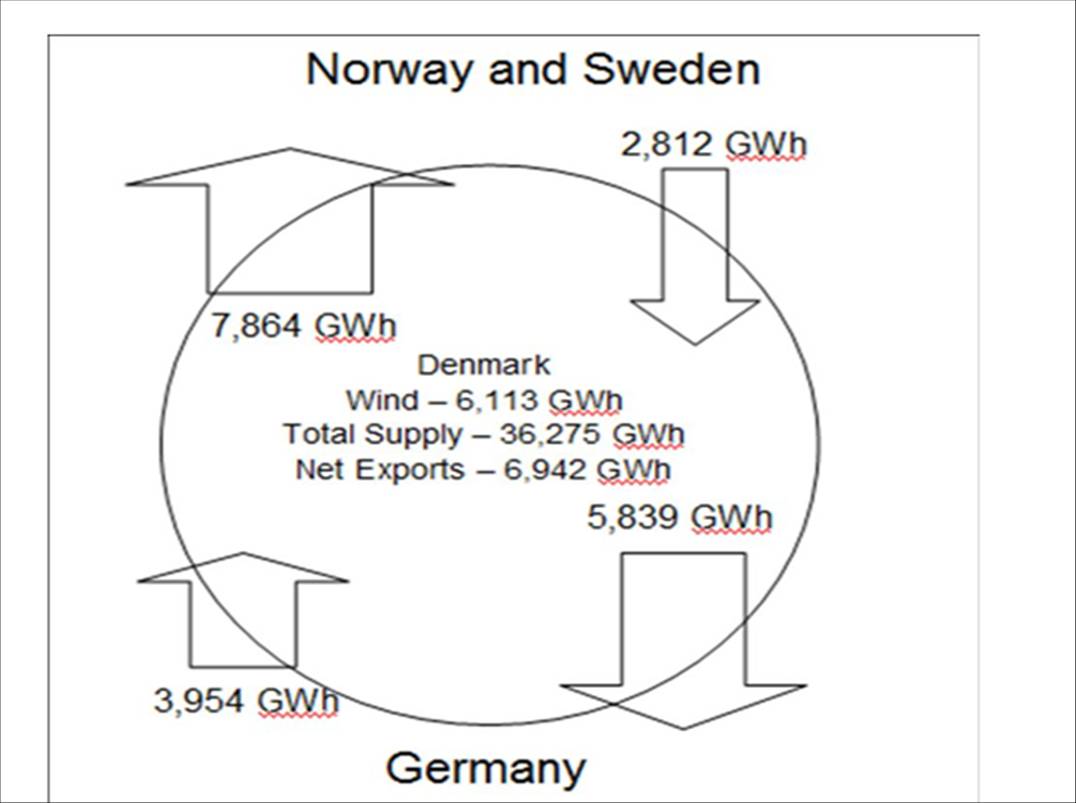 Figure 3 – Danish imports and exports of electricity in 2006, a dry year with Nordic water reservoirs not full.

There is a stronger north flow compared to a south one. Norway and Sweden likely take all the wind power they can from Denmark to conserve water in their reservoirs and, as in all types of year, the price is right. Bach calculates that about 70% of wind from West Denmark is exported. All exports from Norway/Sweden may flow through to Germany, or some may be used to balance wind within Denmark. The imports/exports with Germany are likely split between Denmark and Norway/Sweden. Denmark is importing German electricity (likely fossil-fuel generated) and possibly exporting fossil-fuel generated electricity to Germany. The reasons for both flows are likely largely timing of supply/demand coupled with price considerations. Wind in Denmark could still be balanced with some Norway/Sweden hydro. Net exports tend to be the greatest of all three year types by a large margin.

Another Analysis of Wind Exports/Imports

There appears to be no complete analysis that convincingly shows the reality of the Danish wind exports and hence actual domestic use of wind power. The following is an attempt to start to overcome this. It is not based on considerations of net exports alone, but takes actual imports/exports into account. In this connection, it must be remembered that without knowing the fuel mix of exports and imports any analysis remains in the area of speculation, but this still leaves open the consideration of plausible speculation. Further supporting the following analysis, as previously explained, there is considerable evidence indicating that a large proportion of Danish wind production is exported.

Bach’s approach in general is that, on an hourly basis, wind exports are the lesser of wind production or net exports. As reported by CEPOS, Bach determines the following approximate annual levels for wind exports:

Taking some liberties in applying the effects of Bach’s hourly assumptions that were discussed at the beginning of this post to these annual numbers, the following values will be used for an analysis of wind exports:

Table 1 summarizes the results of applying the above factors to the Danish electricity production for the period 2001 to 2008, which are the years of Bach’s findings. 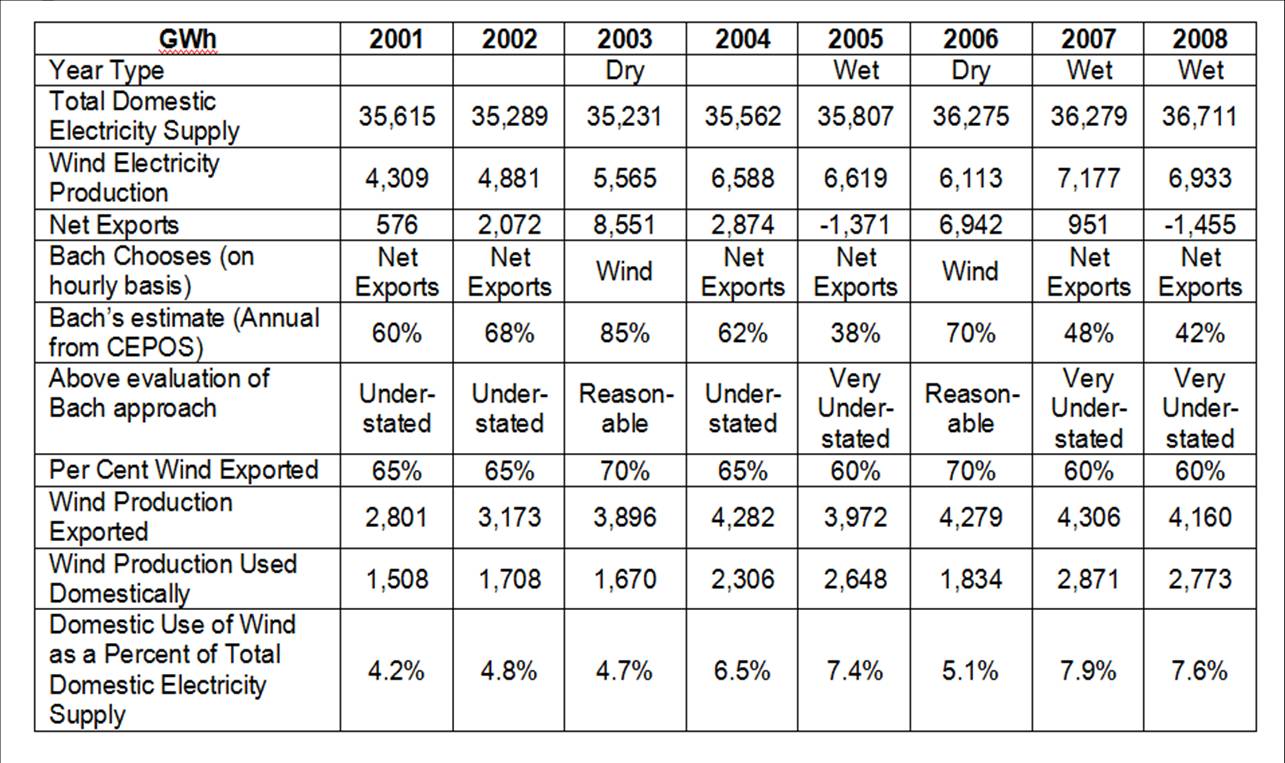 Readers are invited to consider the foregoing carefully and draw their own conclusions. Thoughtful comments are welcome.

The above analysis and the Denmark situation in general provide a strong indication of the upper limit of manageable wind penetration for a country, state or province.

Part IV will address the issue of the impact of Danish wind on CO2 emissions.