Climate Politics: Running Scared in the EU (even before Climategate)

The European Union is very concerned about climate.

But its concern is not principally about the scares emanating from the assumption-driven (Malthus in/Malthus out) studies regarding man-made climate change. The EU’s leaders fear that the Old Continent’s self-declared “leadership” in the “world war against climate change” might not be joined–and thus will be rendered ineffective in the global context. And the politicians know that all-pain/no-gain climate policy will increasingly trouble the voters, who must be placated.

This is a bitter pill given that the U.S. presidential elections brought into office the environmentally oriented Barack Obama and the alarmist dream team (Carol Browner, John Holdren, etc.). Europe felt like its efforts to curb emissions would enter a new phase, where the rest of the world would have progressively joined forces and leveled the playing field on pricing carbon emissions. For Europe, that would have meant shrinking the competitiveness gap that is created by its higher energy prices, as well as gaining a competitive advantage in the newly formed carbon markets. (The EU Emissions Trading Scheme, which has been active since January 2005, is the largest functioning carbon market in the world).

The Asian-Pacific Economic Cooperation (APEC) meeting last week, though, made clear that such countries as the U.S. and China are not willing to spend too much on reducing emissions, at least until the global recession is over. The compromise that was closed thanks to the Danish Prime Minister, Lars Rasmussen, who flew to Singapore for this reason, says that the conclusions of the Copenhagen meeting will be “politically binding,” but not legally binding. That means the December negotiations will lead to writing a lot of hot air, but few facts. (Incidentally, one wonders whether Mr Rasmussen’s trip, vis-à-vis the result he secured, was carbon-efficient…).

From the European point of view, the looming failure of Copenhagen is a double defeat, both on the methods and the substance that the Old Continent has been pursuing for years. As to the methods, the “pact” between the US and the Chinese Presidents displaces the milestones of the EU’s would-be “multilateral” approach. On the one hand, the relevant decision is made before the UN-sponsored meeting, and between a limited number of actors. So, no multilateralism here. On the other hand, the joint decision is actually a consequence of domestic decisions – Beijing believes economic growth is more urgent than emission cuts, and Washington has other political priorities (healthcare reform) and economic priorities (getting out of the recession), which leave little room for a climate bill to be passed. As a consequence, what is discussed in the international meetings is not, as the EU would dream, a global agenda to fight global warming, but, at most, some minor measures to coordinate domestic policies that would be undertaken anyway, although in slightly different forms.

There is also a more substantial issue that the EU member States will have to address. The EU has passed a directive that mandates emissions be cut by 20% below 1990 levels, and renewable sources of energy rise to cover 20% of the total energy consumption, by 2020. Under the directive, the emissions reduction target should be raised up to 30% if a global agreement is reached. Moreover, environmental ministers signed a commitment to cut emissions by 80-95% (that is, down to almost pre-industrial levels) by 2050. That means that Europe has to undertake a major effort to change its energy and industrial systems, whatever happens in Copenhagen. If competing economies do not follow the same road, the competitiveness gap is likely to increase, weakening the EU’s economy in the worst moment of the recession and creating an incentive for the energy-intensive industries to delocalize. Once the risk of widening the gap is factored in, one easily understands why the Italian and German confederations of businesses called on their own governments not to aim too high on climate. “Growth and employment are endangered, if the European industry is to shoulder further costs due to callow rules for emissions trading”, Confindustria and BDI wrote in a joint statement .

What strikes one the most is the apparent lack of understanding in Europe of the most recent trends in emissions. After a long trail of growth or moderate reductions in European emissions, in 2009 emissions will decrease substantially because of the recession. But if one looks at the medium run, one realizes that – despite the economic downturn and the existing and planned policies – Europe will hardly meet its own targets by 2020 http://www.eea.europa.eu/publications/eea_report_2009_9 , as the following figure shows: 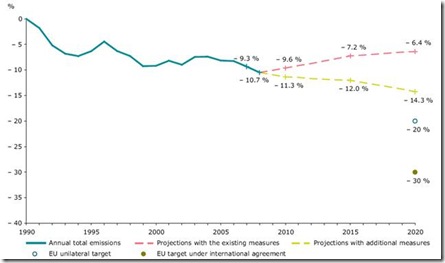 The graph, which is from the European Environment Agency, suggests that, even under “optimistic” assumptions (*), it will be unlikely to cut emissions by 20% by 2020 (leave aside the more ambitious goal of cutting emissions by 30%). The reason is very simple: for capital-intensive industry such as the energy and energy-intensive industries, the time span from now to 2020 is a relatively short one. There is no time to make such a substantial change in so few years, at a reasonable cost. Despite the myth – that the European Commission itself propagates – that green investments are profitable even in economic terms, there is a widespread perception that that is not true. In fact, if green investments were a good deal, you wouldn’t need to force businesses to put their money where your mouth is. After all, the World Energy Outlook 2009, which has just been released by the International Energy Agency (which is strongly supportive of the Copenhagen green agenda), claims that “the cost of the additional investments needed to put the world onto a 450-ppm path is at least partially offset by economic, health and energy-security benefits”. If you translate it into plain English, “at least partially” means that green investments would have a negative rate of return.

(*) Optimism is in the eye of the beholder: European officials believe a scenario of emissions reductions is “optimistic” because it implies less environmental impact. I believe it is actually a pessimistic scenario, because the lower environmental impact is just presumed and related to a distant future, while less emissions imply immediately and almost certainly slower economic growth – that is, less wealth and jobs.

Carlo Stagnaro is the research and studies director of Instituto Bruno Leoni in Italy, a Milan-based free-market think thank.