The Ethanol Mandate: Don’t Tweak, Abolish (a costly fuel without a public purpose)

[Editor note: This post is taken from a new policy brief, The Latest Unanticipated Consequence in the Ethanol Fiasco, released by the Mosbacher Institute for Trade, Economics, and Public Policy at Texas A&M University. Professor Griffin, who directs the Mosbacher Institute, is also author of U.S. Ethanol Policy: Time to Reconsider? in The Energy Journal (Fall 2013).]

Shown on the left scale of Figure 1 was the Energy Information Administration’s (EIA) 2006 gasoline consumption forecast. The EIA predicted that 2007 gasoline consumption would rise from 9.6 million barrels per day (MMB/D) and would grow to 11.5 MMB/D by 2022 — a 20% increase. At the time of the 2007 legislation, ethanol production stood at 0.6 MMB/D – or 6% of the volume of gasoline. 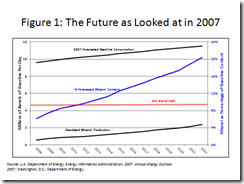 But the mandated ethanol volumes ratcheted up over time, and eventually, staying under the E10 blend wall would not be possible. With an E10 blend wall, the full volume of ethanol mandated could no longer be met.

To remain compliant with the 2007 mandates, the EPA devised a clever incentive system which would force gasoline blenders to produce a mix of both E10 and E85 (85% ethanol), thus achieving the desired ethanol production target. Most consumers would buy E10, and a relatively small fraction would buy E85.

Based on these forecasts if E85 flex-fuel vehicles increased to just 14% of the automobile fleet by 2022, and 86% of vehicles continued buying E10, the overall 20% blend average shown in Figure 1 would be satisfied. The regulators had struck a precarious balancing act; unfortunately, it was based upon faulty forecasts. 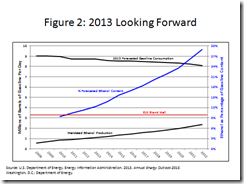 In all likelihood, the 2013 EIA gasoline demand predictions are likely to prove too optimistic about gasoline’s future. They do not factor in the substitution to natural-gas powered vehicles. Because compressed natural gas is likely to be much cheaper than gasoline, it is only a matter of time before the infrastructure is completed to allow this substitution.

For example, if substitution to natural gas powered vehicles impacted only 12% of the vehicle fleet by 2022, this would further trim gasoline consumption from 8.1 MMB/D to 7.1 MMB/D by 2022. Even with this small increase in the share of natural gas powered vehicles, the ethanol content of the gasoline pool could rise to 34%, posing an even greater problem for the future viability of E10 and E85 gasoline.

Will E85 Flex-Fuel Vehicles Save Ethanol?

Even if the ethanol content of the gasoline pool rises to only 28%, it will mean that the number of vehicles using E85 must rise to 24% of the vehicle fleet (versus 14% originally forecast in 2007). If one factors in likely natural gas displacement of gasoline, the fraction of E85 vehicles would be about 31% of the gasoline-power vehicle fleet.

This leads to the question: Is it realistic to assume that E85 flex-fuel vehicles will make up between 24 and 31% of the gasoline powered vehicles in 2022?

To date, sales of flex-fuel vehicles capable of burning E85 have languished as a share of the total gasoline consuming vehicle fleet. In 2012, the share was only 4.7% of new vehicle sales and this was only accomplished with a variety of federal incentives to buy flex-fuel vehicles. Despite these incentives, sales of E85 were less than 100,000 barrels per day—or about 1% of total gasoline supplies in 2012.

If consumers aren’t willing to buy flex-fuel vehicles, regulators have seized on the idea of raising the blend wall from a 10% maxi-mum to a 15% maximum ethanol content or from E10 to E15. Initially, this change would help to alleviate the immediate problem.

Is an E15 Blend Wall Feasible?

Already, there is considerable political opposition to E15. It is not just Joe homeowner, whose lawnmower, snow blower, weed eater, and chainsaw don’t like what E15 does to them. According to the Auto Alliance, an auto industry trade association, higher concentrations of ethanol could damage the engines of roughly 5 million cars. 1

AAA CEO Robert Darblenet has stated that 95% of vehicles currently on the road could suffer engine damage from using E15. 2 Vehicle manufacturers including Chrysler, Toyota, Nis-san, BMW, and Volkswagen have stated that use of E15 in their vehicles will void the customer’s warranty. 3

Fortunately, the EPA has recognized the problem and has proposed a one-time relaxation of the ever increasing ethanol mandate for 2014. It will reduce the 2014 mandated requirement from 18.15 billion gallons of ethanol to about 15 billion gallons. 4 If implemented, it will provide a short-run sedative, but no long term solution. 5

After 2014, the mandated ethanol use in gasoline would revert back to the scheduled increases. If that happens, we see from Fig. 2, that E15 will only be a temporary stop on the way to E20 and beyond.

Even though the 2007 ethanol legislation had good intentions, its intended beneficial aspects—on gasoline prices, CO2 emissions, and oil security—have been minimal. The unintended consequences on world food prices have been large and perverse.

Now, with declining U.S. gasoline consumption, it is apparent that the mandates cannot even be practically met. The EPA should not and cannot be expected to solve this problem. Congressional action is needed and there is reason to be hopeful.

There are several bills pending with bipartisan sponsorship. The wisest course of action is to completely dismantle the mandates and their corresponding regulatory burdens.

5 See Lucian Pugliaresi, “Up Against the Blend Wall: Examining EPA’s Role in the Renewable Fuel Standard.” June 5, 2013 testimony to the Subcommittee on Energy Policy, Health Care, and Entitlements.