While a complete accounting might be difficult, this is not a reason for pretending that it is not necessary. Best estimates should be made.”

Consider the following two quite different verdicts on the winners and losers from U.S. energy subsidy policy, the first from a pro-renewable energy organization and the second from a free-market energy group.

Such highly contradictory opinions characterize the energy subsidy debate. Yet the numbers aren’t really in dispute. What is in dispute is what exactly should be measured and compared.

Typically, representatives of the renewable energy industry and environmental advocacy groups cite total dollar amounts without reference to the percentage of total output that the subsidies support (the amount of energy being generated per dollar of subsidy).

An example would be the data referenced by the Environmental Law Institute in the statement cited above. Of course, since wind and solar are quite small industries relative to natural gas, coal, or oil and produce a much smaller percentage of the energy that is used, one would expect that the total amount of subsidies that the renewables receive would also be relatively quite small.

More free-market-oriented researches have argued that these kinds of comparisons are irrelevant, that relevant comparisons would relate to the amount of energy that is actually generated. To compare total subsidies for renewables to total subsidies for traditional energy sources without adjusting for energy generated would be like comparing the state budget of Rhode Island to the state budget of New York without adjusting for population. No one would suggest that such a comparison would convey any meaningful information about the relative size of the two state governments.

These researchers typically counter by examining the amount of government subsidies going to renewables versus traditional energy weighted by the amount of energy that they provide to the market. When this is done the narrative is quite different.

On a per unit of energy bases the amount of subsides going to wind and solar power are dramatically higher than those that go to traditional forms of energy as shown below. 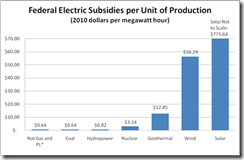 While clearly these comparisons move the conversation in a more relevant direction, my point here is to argue that the analysis on both sides of the debate is incomplete. They are looking at only one side of the ledger. Whether doing so on a total or a per unit of energy output basis, they are still comparing gross subsidies rather than what is economically more relevant, net subsidies.

To understand why it is important to consider penalties along with subsides we must ask why we are concerned about these comparisons in the first place. Why does it matter whether renewable energy sources are or aren’t more heavily subsidized than traditional energy sources?

While for some the answer simply concerns the ability to score rhetorical points against their opponents, the real reason is that we want to gain a better understanding of the extent to which government policy is influencing the course of one industry’s development relative to the other.

The benchmark would be a free market in energy sources where the outcomes are the result of consumer demands, real resource scarcities, and technology. In other words, real forces of supply and demand, as opposed to bureaucratically and politically orchestrated influences. It would be the outcome generated by the former that would be the most efficient.

In the jargon of economics, what the analysis needs to do is subtract the monetary value of those market interventions that decrease supply or demand for particular energy sources, i.e. penalties, from the monetary value of interventions that artificially increase the supply or demand, i.e., subsidies. By “artificially,” I refer to policy driven factors that are not based on actual changes in scarcity, technology, or consumer preferences.

A net subsidies comparison would need to include not only direct government transfers and tax breaks, which is primarily what is emphasized already, but also the monetized value of mandates to use minimum amounts of specific energy sources and other special privileges that might be granted to utility companies to use one type of resource relative to another.

With respect to renewables this would include state programs like the renewable portfolio standards implemented in North Carolina in 2007 requiring that 7.5 percent of the state’s energy be generated from renewable energy sources and the federal minimum requirements for biofuels like ethanol in gasoline.

The purpose of these programs is to cause supply or demand for the relevant energy sources to be greater than they would be in a free market. While these mandates make up a significant part of the government subsidies, particularly in the area of renewable energy sources, they are often ignored because they do not come in the usual form of tax breaks or direct payments. They may, in fact, be the most significant subsidies some of these energy sources receive. Ultimately if the public is forced to buy your product other subsidies like tax incentives are simply icing on the cake.

On the other hand, with respect to more traditional energy sources, the subsidy calculation should also include “construction work in progress” legislation instituted by North Carolina and other states that allows utility companies to pass along the costs of constructing new nuclear and other facilities on to customers before these facilities are completed and whether or not they are completed. At the federal level it should include the value of certain non-pecuniary subsidies to nuclear power, like the Price Anderson Act, which limits liability for nuclear power plant accidents.

The penalty side of these calculations should include not only direct taxes but also the costs of energy source specific regulations and the value of restrictions on land use. I refer to things like ridge laws that keep development of wind power (and other things) off mountaintops and restrictions on drilling and mining (along coastal area, in the ANWR, and on private lands for purposes of hydraulic fracturing, etc.). They should also include specific programs implemented by utility companies in response to laws that require meeting “energy efficiency” standards with the intent of decreasing the demand for energy.

Even though these programs often involve rebates or other cost reductions to both utility companies and consumers, they should be considered a penalty. This is because while encouraging the use of certain kinds of “energy efficient” consumer products, i.e. appliances, or the overall reduction in energy usage, their purpose is to reduce demand for traditional energy sources such as coal and natural gas.

An example of this can be found in North Carolina’s 2007 legislation mentioned above where up to 5 percent of a 12.5 percent renewable energy standard can be met by reductions in energy usage. Similar programs have been adopted in many other states. It is typical that a portion of a renewable energy standard can be met either by transferring demand to renewables such as wind and solar or by reducing demand generally, which is falsely referred to as energy efficiency. The message is either use renewables or don’t use energy at all.

The net subsidies formulation would be the correct standard for comparing subsidies to different energy sources. While a complete accounting might be difficult, this is not a reason for pretending that it is not necessary. Best estimates should be made.

Energy markets are riddled with government intrusions, from mandates and grants of monopoly privilege to special tax breaks and environmental and land use regulations. All energy sources are both subsidized and penalized. The point to remember is that when given comparative estimates regarding energy subsidies alone, we are being told an incomplete story.

From the perspective of economics—and the free society—the important question is how are coercive policies distorting supply and demand relative to a free market that reflects actual scarcities, production costs, and consumer preferences?

On this count, a third, new standard of comparison is called for, one that promises to widen, not reduce, the subsidy advantage for politically driven energies.

Dr. Roy Cordato is VP for research and resident scholar at the John Locke Foundation in Raleigh, North Carolina.