“Reality is best expressed in the absolute level of consumption for each primary-energy source, both the total and the growth—supplemented by some use of percentages. Using these measures, we can say that, throughout the period 1990 to 2035, fossil-fuel consumption was and will be persistently more significant than wind and solar combined.”

Claims are frequently made that wind power and solar power are the “fastest growing” energy sources, meaning that the world is transitioning away from fossil fuels. Let’s see if this withstands examination.

Such claims are usually expressed in terms of percentage growth over time or by percentages of the total. While mathematically correct, and often misleadingly worded (e.g., note my use of “fastest growing”), these are not reasonable representations of what is actually happening.

Reality is best expressed in the absolute level of consumption for each primary-energy source, both the total and the growth—supplemented by some use of percentages. Using these measures, we can say that, throughout the period 1990 to 2035, fossil-fuel consumption was and will be persistently more significant than wind and solar combined, in spite of aggressive implementations of the latter two. This also holds for each of the fossil-fuel categories alone (that is, coal, natural gas and oil/liquids). 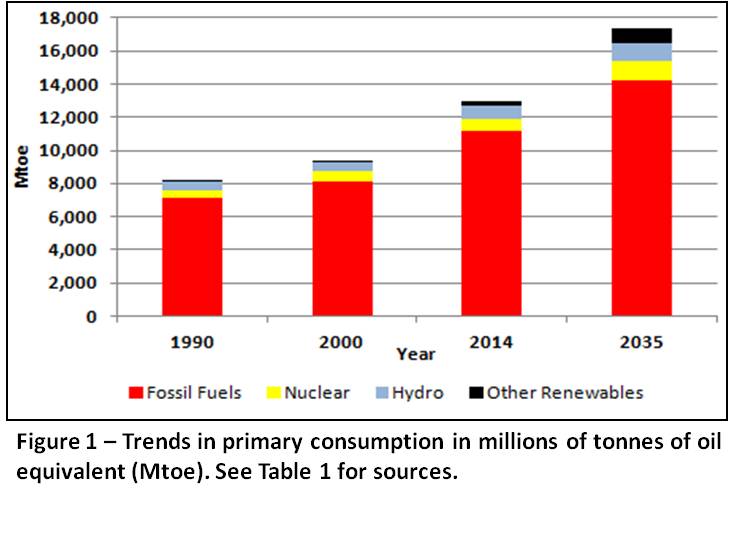 The totals for wind, solar, and biomass for 2035 are calculated from information in Bloomberg (slide 33).[1] Unfortunately there is some “looseness” in all these numbers owing to the nature of their derivation from their sources, as well from analyses in these posts, but it is not enough to affect the robustness of useful insights and conclusions.

There is a lot to consider in these numbers, but a few major points are:

Table 2 provides details of the changes in global energy consumption by fuel over the periods shown.

Note that the values shown are consumption inputs for the processes that use them, for example, energy inputs to electricity systems – not electricity output to end users. Part II will focus on the electricity sector.

Anyone thinking that the solution is to dramatically increase wind and solar, should read European Energy Policy: The ‘Fatal Conceit’ Continues, which reviews the report by the committee of experts that the European Commission established to assess its Energy Roadmap 2050. This should give pause to such notions.

Three major messages for energy policy based on energy reality are:

[1] These were calculated from the information in Bloomberg slide 33, using the following capacity factors: wind – 30%; solar – 20%;and biomass – 90%; and converting to Mtoe. Do not be influenced by claims that technology improvements will make a difference. Wind is basically a mechanical conversion, with little opportunity for technology improvement. Solar does have promise but most likely at the scale of the micro-grid, to help meet local demand and using promising storage capabilities at that level of application. Biomass is largely like a fossil-fuel plant.

[2] See BP plc (2014) slide 18 as an example. Although this example is based on the electricity sector, the absolute numbers tell a different story, as will be shown in Part II.

[3] This is based on the same considerations that show levelized energy costs of non-dispatchable sources cannot be directly compared to dispatchable sources as explained by the U.S. Energy Information Administration, and this is why the EIA shows them in different tables.

[4] Most published energy accounting by fossil-fuel type is simplistically derived from the electricity output by the various plants types ignoring the wasted energy, or “friction”, involved in this balancing process. A possible way to account for this is to add an amount equal to the total wind and solar consumption energy to that for the wind-and-solar-balancing fossil fuel plants.

These are used as sources of data, cross reference and illustration of some points.

U.S. Energy Information Administration (EIA) (2012). Fuel used in electricity generation is projected to shift over the next 25 years. http://www.eia.gov/todayinenergy/detail.cfm?id=7310

One Comment for “Primary Energy Consumption: Fossil Fuels in the Driver’s Seat (Part I – Growth by Fuel)”