How the Federal Reserve Affects the Gold-Oil Relationship

After oil and gasoline prices continued their relentless march up earlier this year, it was nice to have some relief at the pump in May and June. However, since the end of June, prices of WTI crude oil is up over 15%, Brent crude oil is up about 25%, and retail gasoline is up over 7%. Oil and gasoline prices reached three-month highs last week and the Energy Information Administration (EIA) increased their 2012 forecasts of these prices.

There is no doubt that these higher prices will grab the attention of news outlets, policy makers, and the public. With this increased attention, political rhetoric regarding fantasies of governmental regulations and market manipulations will likely reemerge as catalysts to lower these prices.

The less likely scenario is increased awareness on the impacts that central banks, particularly the Federal Reserve, have on these petroleum prices by changes in the money supply. Over the period of this substantial rise in petroleum prices, central banks around the world have taken action from the dismal economic outlook in many global regions.

The U.S. GDP growth rate of only 1.5% in the 2nd quarter of 2012 and unemployment rate of 8.3% in July concern the Fed about economic stability, and several Fed governors recently called for additional quantitative easing measures—purchase of long-term bonds by printing more money. Although the Dallas Federal Reserve Bank President Richard Fisher opposes these additional measures (there are few marginal benefits versus costs), I examine the costs of monetary easing policy based on the relationship between gold and oil prices.

One measure of aggregate money supply, M1—includes currency and demand deposits, increased by 4% since late June. In addition, petroleum prices increased (see above) and the price of gold is up by 2.7% over this period. If there was a direct relationship between the prices of gold and oil, commodity traders, entrepreneurs, and the Fed could benefit from knowing this relationship to forecast the future spot price of oil. A recent article in the Washington Times outlines a direct relationship between these commodity prices and provides a simple calculation to forecast the price of oil with the price of gold.

Here is the statistical relationship found by the author of the article:

Although historically there have been periods when this may be true, Figure 1 illustrates that there are many periods since 1986 when the movements of these prices diverged and were not positively correlated. 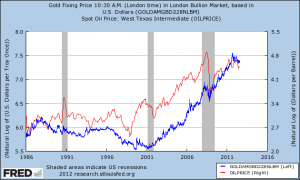 Since these values in Figure 1 are in logs, the change between two periods is the percentage change. If no other market fundamentals affected these prices except for the value of the dollar, considering that both commodities are priced in dollars, then these two should fluctuate closely together. Clearly, these prices do not always move in tandem. Moreover, correlation does not prove causation, as the author of the article seems to suggest. In other words, it is possible that the price of oil causes movements in the price of gold. The data indicate there is a relationship between the two, but there are many times when this link is not as strong. Since these prices are measured in dollars and in the long run, however long that may be, they should revert to an average relationship. The article notes this relationship to be “.0602 ounces of gold times the price of gold produces the price of a barrel of oil”.

Using this simple calculation with the price of gold closing at $1,623 per ounce last Friday, then multiplying this price by .0602 provides an oil price of $97.70 per barrel. However, oil closed at $93.39 per barrel that day. This $4.31 difference between the projected and actual oil prices indicates that there are other oil market fundamentals at work.

Economic research indicates that the fundamentals of supply and demand in the oil market are important to understand for short run and long run fluctuations. In particular, these fundamental changes allow more pricing information for entrepreneurs to decide which investments are profitable. Moreover, the primary source of oil price fluctuations are not from financial speculation but from oil supply, oil demand, or precautionary oil demand—expected oil supply disruptions, such as the concern about a disturbance in Iran’s oil production—can lead to significantly different economic effects.

Oil supply constraints from the bottlenecks in Cushing, OK, have certainly had an impact on the Brent and WTI prices of oil. Furthermore, this divergence between these two oil prices since early 2011 appears to have changed the relationship with these oil prices and the price of gasoline as well. Before 2011 when these oil prices typically moved lockstep with one another, either of these oil prices could be used to fairly predict the future gasoline price. However, the Brent oil price has been the better indicator of the gas price since last spring, which is around the time of the Arab Spring and supply constraints in Cushing began. With this change, Economist James Hamilton provides a simple forecasting model to predict the price of retail gasoline from the Brent price, which using Friday’s closing price of $113.03 forecasts the national average price of gas of $3.66 compared with Friday’s actual average of $3.675. In my research, the ability of spot and futures prices of oil prices to forecast the gas price has not predicted the future gasoline price better than the gas futures price during different periods of gas price volatility. However, my research did not include the Brent oil price and this is a key research that should be explored.

Although historically there are several oil price spikes from oil supply disturbances, these disruptions are typically short-lived because of production changes around the globe to profit from price changes. However, aggregate demand shocks, such as from China and India during the 2000s, last longer. In my research, I find that a global demand for oil shock, represented by a real global economic activity measure that reflects global demand for commodities, has significantly greater U.S. economic effects on the unemployment rate, real GDP growth, and the inflation rate than other oil market disturbances.

These caveats bring me back to my main point of what impact the Fed has on commodity prices because other central banks tend to follow the Fed’s actions and these actions impact the global demand for oil. In particular, this synchronization of monetary policies would affect the value of the dollar—reflected by the price of gold—and change relative prices, which change U.S. economic variables that are not reflected by only oil price fluctuations. Simply, the price of oil does not matter much. The sources of oil price movements are what matters. In addition, the Fed’s contribution to these underlying causes from its impact on gold, the U.S. dollar, and global demand for oil also change the macroeconomic effects of an oil price shock.

As noted in the Washington Times article above, the author’s simple gold-oil price calculation was wildly off over time. Nominal commodity prices, like all nominal prices, are subject to wild swings that are dependent on a number of variables. What we should focus on are real prices. Therefore, the price of gold gives a valuation of the value of the dollar and provides an indication of the price of oil, all else constant, but it is not perfect. Oil market fundamentals are helpful in determining what is driving the price of oil.

However, these underlying causes of oil price fluctuations may be determined by Fed policies from flows of newly printed dollars into different investments. The Fed distorts interest rates when their policies do not reflect market fundamentals in the loanable funds market. Specifically, the Fed’s discretionary policies of purchasing government bonds and creating artificial bond prices that do not reflect supply and demand in the loanable funds market distort the allocation of resources to different maturating assets. This creates malinvestments along the production process. When we think about how government policies impact gold and oil prices, we must consider those from the Federal Reserve. I look forward to your comments.