“Without due process and analytical transparency, purported societal benefits become even more debatable. The U.S. Department of Energy (DOE) is supposed to comply with Executive Orders (EO) 12988 and 13132 to minimize litigation, eliminate ambiguity, and reduce regulatory burdens.”

“In the realities of a competitive marketplace, such policies can and do abuse consumers’ best economic interests. By claiming some sort of market failure, DOE is authorized to force ‘energy efficiency’ investments’ upon consumers.”

“Hurrah” to the American Public Gas Association (APGA), a small trade group that was willing to step-up to U.S. Department of Energy (DOE) and other special-interest organizations that want energy efficiency at any cost to the American consumer. The APGA/DOE Furnace Rule Settlement prevented the unintended consequences of regulatory overreach by allowing consumers choices between regulated and unregulated (and less regulated) products.

I was wrong. They’re back. The settlement between APGA vs. DOE only remanded this “expedited rulemaking” for “regional standards” back to DOE for a “makeover” in the hopes that “due process” would prevail.  Per the terms of the settlement agreement, this current Notice of Proposed Rulemaking (NOPR) proceeding can logically be viewed as a continuation of that DFR.

What DOE is proposing in terms, as Einstein put it: “are as simply as possible but no simpler,” is:

The following hyperlink, courtesy of the American Gas Association (AGA), provide a useful non-technical explanation of the physics of non-condensing versus condensing furnaces: https://www.aga.org/sites/default/files/aga_2995_furnace_standard_infographic_web_final.pdf

My objectives are to:

In accordance with the APGA vs. DOE stipulation agreement, on March 12, 2015, DOE issued a NOPR in the Federal Register that proposed a single national standard at a minimum efficiency level of 92% AFUE for non-weatherized gas furnaces and mobile home gas furnaces.[2]  DOE released a 957-page “technical support document” (TSD) on Feb 24th 2015 to substantiate the NOPR, which included a detailed review of the effects of the NOPR as well as economic modeling in the form of Life-Cycle costing (LCC) spreadsheets to assess consumer-level cost impacts.  Since then, “industry” has been unravelling these LCC spreadsheets in order to critique DOE’s “determinations.” These efforts have required a major investment of resources which were ridiculed as typical corporate greed by DOE’s front group, the “Appliance Standards Awareness Project” (ASAP) in an E&E Daily’s Greenwire article from June 11th, 2015 titled DOE furnace rule relies on irrational behavior – industry,[3]

My past history with DOE’s energy efficiency programs includes being twice appointed (by Secretary Peña and Richardson) as an advisor to DOE through its now defunct “Advisory Committee on Appliance Energy Efficiency Standards” (which was officially terminated on 12/02/00).[4] The relevance of these experiences will be further elaborated upon later in this article.  The upshot, however, is this: Commenting to DOE is futile because DOE inevitably does whatever it and its “energy efficiency” clientele want; despite “industry” comments.  Meet the new poster child for “regulatory capture.”

Hopefully, the main takeaway from this article is an understanding of how far DOE has digressed from legitimately serving the American public through its “manifest destiny” for “clean energy” that evidently excludes natural gas direct use. Basically, it appears that DOE’s latest furnace efficiency NOPR is a vindictive response to APGA’s challenge of DOE’s authority; as is clearly evidenced by their regulatory objective in this NOPR to eliminate non-condensing furnaces.

In an effort to graphically illustrate what appears to be DOE’s vindictive behavior, the following table compares key differences in DOE’s official “determinations “ within its Life Cycle Cost (LCC) spreadsheets between the 2011 DFR and this current NOPR. 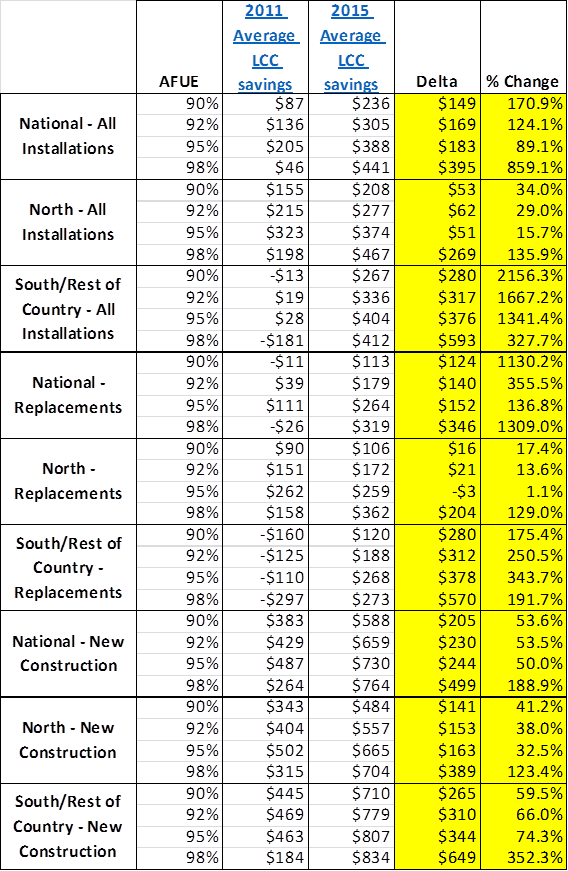 This table was presented to DOE at the continuation of its public meeting on April 13th, 2015 and subsequently entered into regulations.gov on April 30th, 2015. At that time, I asked DOE to account for these changes.  At page 127, line 21-22, of the transcript, DOE’s explanation was:

Unfortunately, avoiding hard questions was the norm for DOE during these meetings.  So far, no attempt has been made by DOE to explain these economics improvements that occurred in a few short years in which gas prices declined and DOE proposed AFUE has only changed by 2%.  Think about it.

Based on my analyses, using actual bids for a 92% AFUE condensing furnace versus a non-condensing one in a typical installation (with no significant installation problems) along with actual utility savings (based on current natural gas tariff sheets), a simple payback of over 30 years is indicated.  While furnace life expectancy varies, a 30-year payback is at least 10 years longer than furnaces typically last. Similarly conducted studies in other regions of the country (using different climates and gas rates) are similarly unappealing; if not worse.

My conclusion is that DOE is continuing to manipulate key variable/inputs in order to justify its “energy efficiency” objectives.  In the highly competitive marketplace where natural gas and electric utilities compete, these objectives tend to discriminate against natural gas direct use by incrementally increasing the installed cost of gas appliances relative to electric counterparts.  DOE’s LCC spreadsheets are its delivery mechanism for officially making its “determinations” that interference in the market is somehow justified.

Since the release of DOE’s TSD, the Gas Technology Institute (GTI) has been engaged by AGA and APGA to analytically debunk DOE’s convoluted “determinations.”  How significant were GTI’s efforts?  According to E&E Daily’s aforementioned 6/11/2015 Greenwire article GTI’s analytical fees were $250,000.  A legitimate question that should have been asked by E&E Daily’s reporter at that point is why would it take $250,000 to decipher DOE’s LCC spreadsheets?

The short answer should have been because DOE’s spreadsheets are that convoluted.  $250,000 is what it takes to employ sufficient PhD’s to independently challenge DOE’s PhD’s who develop, maintain and defend DOE’s LCC spreadsheets.  It should also be noted that this $250,000 does not include expenses incurred by some other gas utility interests that are also engaged in analytically critiquing this NOPR.

This particular rule, released in 1996, sets 10 “quality control” objectives.[5]  Of these objectives, the following is the most important but neglected:

(g) Use transparent and robust analytical methods. The Department seeks to use qualitative and quantitative analytical methods that are fully documented for the public and that produce results that can be explained and reproduced, so that the analytical underpinnings for policy decisions on standards are as sound and well-accepted as possible. Under the guidelines in this appendix, DOE will solicit input from interested parties in identifying analysis, data, and modeling needs with respect to measurement of impacts on manufacturers and consumers.

The Greenwire article relied on “Andrew deLaski, executive director of the Appliance Standards Awareness Project” (ASAP) for a rebuttal who said:

This article should have also noted that:

So are DOE’s “determinations” indeed “solid” as claimed by ASAP?  Perhaps; if robust and obese are considered to be synonyms.  “Transparency,” however, is harder to dismiss as evidenced by the $250,000 cost incurred to independently analyze DOE’s “determinations.”  So DOE ignores it all and attempts to shift its burden of proof to stakeholders’ through litigation. However, even APGA’s litigation that led to remanding DOE’s 2011 DFR has not had a noticeable effect on DOE’s process transparency.

DOE (unlike those who would challenge DOE) has relatively unlimited fiscal resources for its legal defense through taxation.  Litigation is also complicated by overly nebulous Congressional authority given to DOE “as the Secretary determines.”  Such loosely-worded/open-ended authority is further bolstered by equally nebulous economic requirements via Section 307(b) of the Energy Conservation and Production Act (ECPA, Pub. L. 102–486). The following is a fair, working translation of EPCA Sec. 307(b):  Average energy average savings must at least break-even with the measure’s incremental investment costs over its lifetime.

Would any legitimate economist consider it rational for consumers’ to freely make such an investment choice?  I don’t think so.

In the realities of a competitive marketplace, such policies can and do abuse consumers’ best economic interests. By claiming some sort of market failure, DOE is authorized to force “energy efficiency” investments’ upon consumers.

Over the past several decades, Congress has continued to grant broad discretion to DOE in the regulation of appliance minimum efficiency standards. For better or worse, this authority is increasingly dictating what, when and how appliances are constructed and inevitably, this impacts what energy resources are selected for building operations.

Nationalization … is the process of taking a private industry or private assets into public ownership by a national government or state.

Every manufacturer representative I talked to at DOE’s public meeting on April 13th, 2015 agreed that the term nationalization fits the present situation.

Without due process and analytical transparency, purported societal benefits become even more debatable. DOE is supposed to comply with Executive Orders (EO) 12988 and 13132 to minimize litigation, eliminate ambiguity, and reduce regulatory burdens. Likewise, the potential for a more truly collaborative relationship between DOE and “industry” becomes increasingly strained; especially if the implicit DOE objective is to switch consumers from the direct use of natural gas to electricity (which is increasingly an indirect use of natural gas).

DOE’s favoritism for expanding the electric grid seems to revolve around the following themes:

Such electro-evangelistic tendencies can be traced back at least 10 to 15 years; when I was a member of DOE’s predecessor to ASRAC. The editor of the publication “Public Utilities Fortnightly” acknowledged this “game” in their March 15th, 1998 issue[14] as well as an article from December 1996 titled “It’s a War Out There: A Gas Man Questions Electric “Efficiency.”[15]  Further documentation of DOE’s chronic pattern of abuse can be reviewed by using the search box at MasterResource for “Mark Krebs” and/or regulations.gov (while selecting the “public submission” filter).

Assuming Congress (or the next Administration) wants to regain a semblance of control over DOE, a recommended starting place would be:

Or not: Just rail against DOE long enough, like Spencer Abraham when he was in Congress , and you get appointed to head it.[16]  Here’s another alternative:  outlaw all subsidies for everything. Then DOE would simply disappear.  But doing away with subsidies could eliminate a primary means that Congress uses to dole out political favors.  So now what?

[12] Not available online.  Copies of DOE correspondence can be provided upon request.