The Campaign to Win Hearts and Minds

“We all have a stake in the war over fossil fuels, and it’s a war that will ultimately be won or lost depending on whether we can win the moral and environmental high ground.”

As I wrote in Friday’s post, the challenge of persuading the public in favor of fossil fuels is really one of conveying the fact that fossil fuels improve the planet for human life, in such a way that you quickly capture the moral high ground and the environmental high ground—as against taking defensive stands on these issues (or none at all).

At the Center for Industrial Progress, we do a lot to help companies move hearts and minds by applying these ideas to their communications projects, and we’ve also begun a campaign to take our strategy to the public directly.

The ‘I Love Fossil Fuels’ Campaign

I’ve heard as an excuse in many industries that have to deal with the Green movement that we’re at a disadvantage because the other side has some emotional advantage.

But that’s only true if we let them own the value issues, like environment. If we own them, by giving the big picture, with plenty of examples, plenty of justified emotion—we have the advantage.

And in fact, people will be inoculated against anti-fossil fuel messaging, because they’ll know clearly and concretely how destructive it is to oppose fossil fuel.

As evidence for this, I want to show you a few images from our new Facebook campaign, “I Love Fossil Fuels.” I did not make one of these, they’re all just from people who have taken in our work. (Click for larger images.) 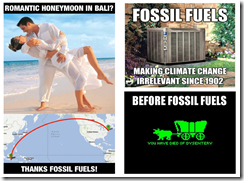 There’s no reason this isn’t possible on a bigger scale—all of us just need to work together to incorporate taking the moral and environmental high ground into our messaging.

We all have a stake in the war over fossil fuels, and it’s a war that will ultimately be won or lost depending on whether we can win the moral and environmental high ground.

Are you going to try to use this approach to help this industry earn the image, and the freedom that it deserves? Or are you going to sit by and leave the fate of fossil fuels to others and to chance?

The I Love Fossil Fuels campaign has recently become involved in opposing the fossil fuel divestment movement spreading across American college campuses. Please read our open letter to universities, titled “Don’t Divest, Educate,” and go to our FAQ page to learn more about the divestment movement about what you can do to stop it.