Another breach in the badly aging Kyoto wall has been opened.

After the failure of the Copenhagen meeting, the Italian Senate passed a motion calling for a re-assessment of European Union climate policies as well as a review of the IPCC process. The motion, presented by Sen. Antonio D’Alì (chairman of the Environment Committee) and Sen. Guido Possa (chairman of the Education Committee) as well as many other Senators, is a powerful sign of wide and growing dissent in many EU member states.

The EU is the largest economy to have ratified the Kyoto Protocol, under which it is committed to cut its greenhouse gas (GHG) emissions to 8% below 1990 levels in 2008-12. The EU has subsequently adopted a package of directives, the so-called “20-20-20,” that mandates a 20% reduction of GHG emissions below 1990 levels by 2020 and that 20% of total energy consumption will be provided by renewable sources, with a non-mandatory target of a 20% increase in energy efficiency.

In order to achieve such ambitious goals, Europe has created a large cap and trade program, called the Emissions Trading Scheme (ETS), under which over 12,000 industrial installations are required to surrender an amount of emission allowances high enough to cover their own annual emissions. Extra allowances can be bought and sold on the market. Theoretically, such a mechanism is supposed to create incentives for businesses to invest in clean technologies, reducing emissions through an economically efficient process.

Despite the political success of cap and trade – easily sold to voters as a means to force “big business” to pay for the pollution that they supposedly cause – cap and trade is often criticized, even by mainstream economists, as inefficient and ineffective.  The costs, it is argued, outweigh the benefits.

Assuming that cap and trade (and, more specifically, the ETS) is actually working, the cost of energy and of energy intensive production should rise. As a result, all else being equal, fewer energy-intensive goods and services will be produced. Fossil-fuel production will drop as as alternative energy sources come on line and as energy consumption falls due to conservation measures.

And as energy supplies fall and prices rise, energy-intensive production will relocate from Europe to countries in which production costs are lower, such as in Asia’s emerging economies. Ironically, since the level of technology is lower in these countries than in Europe, the amount of emissions per unit of production may actually increase. In other words, one consequence of a working cap-and-trade scheme is that emissions may fall where the scheme is enforced, and simultaneously rise in other parts of the world.

Suppose, for example, that an Italian paper producer moves a plant to China. For a unit of production worth, say, US $1,000 of value added, the Chinese plant would emit 2.120 instead of 0.250 tons of CO2 equivalent. EU emissions would decrease by 0.250 tons, but Chinese emissions would increase 2.120 tons, with a net increase in global emissions of 1.870 tons, or 748% above the counter-factual scenario. Since global warming is, well, global, EU policies are likely to result in more, not less, warming (assuming that anthropogenic emissions are a substantial cause of climate change).

This is obviously an extreme case, and there are also examples of genuine reductions achieved thanks to the ETS, but the net balance of reductions and increases is, at least, ambiguous. Even under the most favorable scenario, actual emissions reductions are significantly lower than expected. This phenomenon, known as “carbon leakage,” impacts more than the economics of the ETS; it also has a political impact.

A World Bank survey has found that “dirty” economic sectors tend to be more energy-intensive than “clean” sectors, and about as, or slightly less, labor-intensive. In the short to medium run, higher carbon prices would translate into higher energy prices, with the risk of substantial delocalization. Being held responsible for job destruction, or for seriously harming important sectors of the economy, is not a nice business card for a policy. Not by chance, the European Union claims that its policies will, somehow, create new jobs and more growth, but there is no evidence for that (the evidence is, in fact, to the contrary).

But the point is, regardless to what they say, the EU bureaucrats know very well what they do, and understand its consequences. In order to prevent negative impacts on energy-intensive industries, they are designing a number of “corrections” to the policies currently employed, including (but by no means limited to) exemptions from ETS and the distribution of free emission allowances to all industries exposed to international competition.

While these problems are being willingly inserted into the ETS in Europe, the ETS has worked poorly so far for other, more serious reasons. In the first phase of ETS (2005-7) emissions actually rose as a consequence of an over-allocation of quotas in the most politically powerful countries, which drove the price of emission allowances close to zero. In the (current, 2008-12) second phase, however, emissions are falling dramatically in the ETS sectors as well as, the EU believes, in non-ETS sectors. The drop may be enough so that, contrary to forecasts of just a couple of years ago, the EU could meet, or only slightly miss, its Kyoto targets. 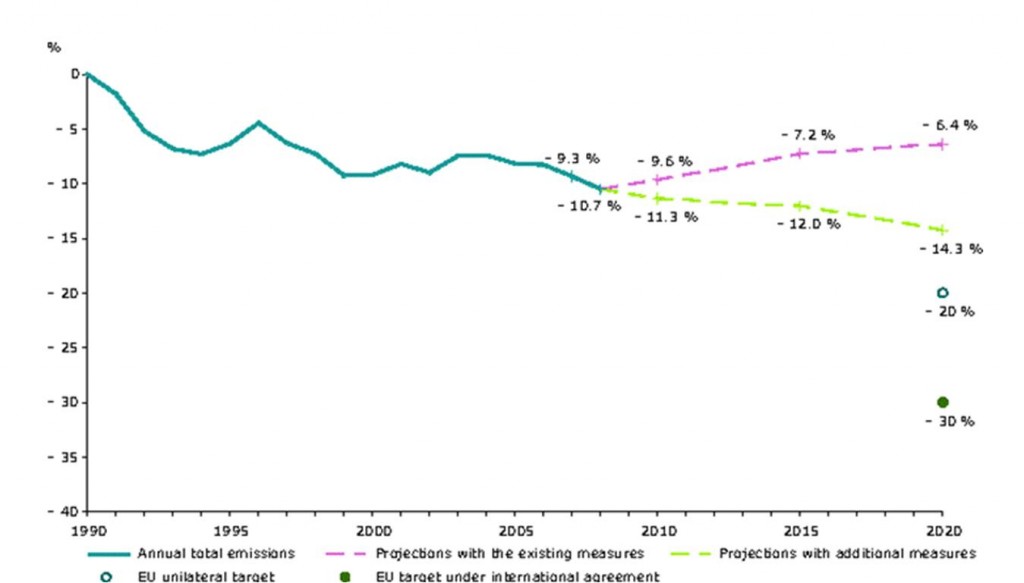 What is becoming clear, though, is that climate policies are not the primary reason for the reductions in GHG emissions. Instead, it was largely the economic crisis that drove the 16% drop in ETS sector emissions during 2008-2009. While data are too poor to draw significant correlation – ETS Phase 2 has been in force since 2007 – it is intuitively clear that economic growth, or lack thereof, drives emissions reductions in the short run, as the next figure shows. 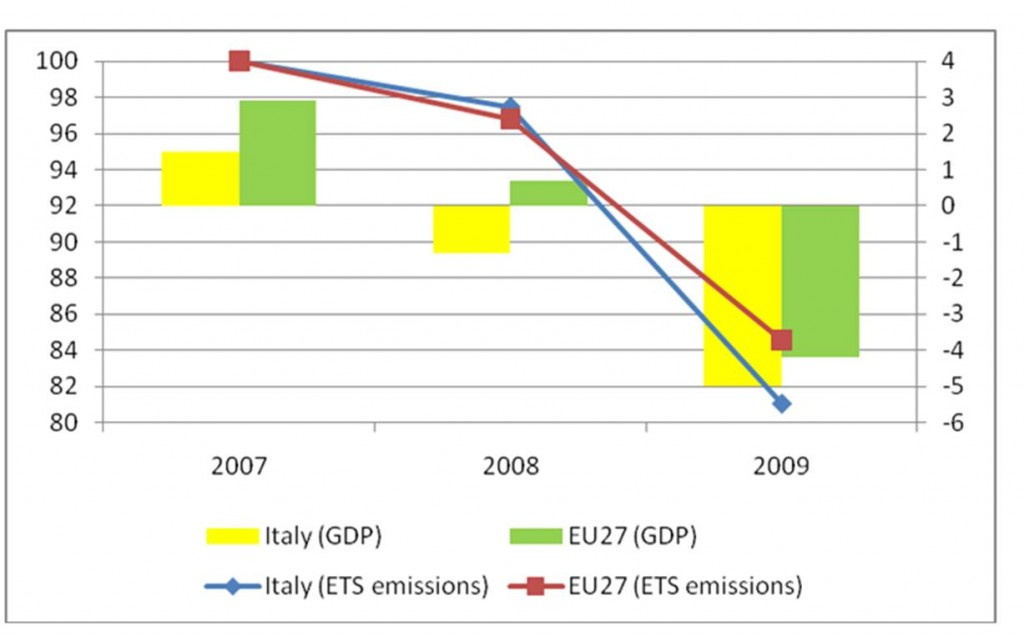 This probably works both ways. That is, emission reductions may drive the economy down. There is a very strong link, in the short run, between emissions, energy consumption, and wealth creation. The more wealth is created, the more energy is demanded, and the more emissions are produced. Any policy aimed at cutting emissions will, in the short run, endanger economic growth. In the long run, a policy might be neutral with respect to growth only if alternative, cleaner technologies are available at the same, or lower, cost than carbon-intensive technologies. In that case, though, climate policies would have little impact, because businesses would shift to cleaner technologies anyway, not for the sake of cutting emissions, but to save money.

All of this helps to understand the rationale behind the Italian Senate’s motion. On the one hand, as the figure above shows, Italy’s GDP fell more in 2008 and 2009 than did that of the EU27, and its emissions fell accordingly as well. Policy makers and the public at large realize that the two things go together.

On the other hand, the country had perhaps a more lively debate on climate issues than many other EU member states. That created favorable political conditions for such a strong position to be taken as did a number of courageous senators such as Mr D’Alì and Mr Possa. The motion is likely to have no practical effect, though, because the government is showing no sign that it is willing to follow the Senate’s lead.

Moreover, even if the government, and particularly the environment minister, Stefania Prestigiacomo (who, so far, has not been able to develop a credible position on climate), were willing, under the EU treaty, there may be no way in which to achieve a re-negotiation of the energy- and climate-related package of directives.

Yet, politics is not just about decisions: it is also about feelings and signals. The Italian Senate’s motion is perhaps the strongest indication of discontent since the vocal opposition from Czech Republic President, Vaclav Klaus, was heard and since the attempts by Poland and other Eastern countries to mitigate the scope of the “20-20-20” policy. In the long run, sound ideas may make a difference. The Italian Senate should be praised for its willingness to show that the debate is not over.