[Editor’s note: This is the final post in the series reviewing studies for the Netherlands, Colorado and Texas on (elevated) fossil-fuel emissions associated with firming otherwise intermittent wind power. Part I introduced the issues. Part II showed negated emission savings for the Netherlands at current wind penetration (about 3 percent). Part III extended the Netherland’s experience to the higher wind penetration in Colorado (6%) which demonstrates higher emissions. Part IV concludes with the Bentek results for Texas,which confirms those for Colorado.]

There are a number of relevant, notable characteristics of the 2008 Texas electricity production profile, 85% of which is managed by ERCOT:

Because of recycling events, arguably attributable to the presence of wind plants, the results are the same as for PSCO, that is, there is an increase in CO2 emissions with the presence of wind. In ERCOT, the coal plants produced an additional CO2 emissions in 2008 of about 0-566,000 tons over running stably without these events, and in 2009, an additional 772,000-1,102,000 tons.

From DOE/EIA published information, for Texas in 2008, for utility fossil fuel plants only, at ?F=0, this is: [as noted in previous parts of this series ? is intended to be the Greek letter delta, representing a “change in”]

For all fossil fuel plants in the system (less CHP) this becomes:

Based on the totals used in Figure VI-4 (2009 data) for ERCOT, there might be some suggestion of using independent suppliers to balance wind. The 2.5% value assumes all the independent suppliers are used, which is unlikely. In the absence of more information, the PSCO calculated ?R of 3.3% will be used for the deriving the calculator input for heat rate penalty, which is the same as for PSCO at starting at 35% but adjusted down to 20-25% for the lower capacity factor as used in Figure 4 of the calculator Part V post.

As for PSCO, a reasonable view is that both coal and gas plants will be involved in cycling at different times. Although coal and gas production are about the same in ERCOT, because wind is strongest at night, coal is more heavily weighted in the wind balancing mix at 67% coal and 33% gas. The total ERCOT gas mix is heavily weighted to CCGT production, but for wind balancing about an equal split with OCGT is assumed. This means more production from existing OCGT or possibly some CCGT plants being run as OCGT. Frequent cycling of CCGT plants damages the HRSGs so single stage operation is needed. In summary, more OCGT production is used than would be required if wind was not present in the system. The emissions increase over normal coal/CCGT operations becomes 2.3 million tons per year. This is an aspect not addressed in the Bentek paper. Table 1 shows the comparison of the Bentek results with the calculator.

Table 1 – Comparison of Bentek Study and Calculator results for ERCOT

The calculator results directly comparable to the Bentek findings are very close to Bentek’s. It should be emphasized that this is not likely the whole story as the gas cycling impacts should also be taken into account.

Summary of Dutch and Bentek Studies

Table 2 provides an overview of the findings of this series on wind integration. In summary, the Netherlands experience is that at wind penetration of about 3% the fossil fuel and CO2 emissions saving is reduced to zero. As wind penetration is increased, the Colorado and Texas experience shows that the savings become negative, that is, fossil fuel and CO2 emissions are increased. The integration of all the considerations for the three approaches is complex and necessarily simplified. Any additional insights are welcome.

Table 2 – Summary of the Three Approaches Analyzed in this Series 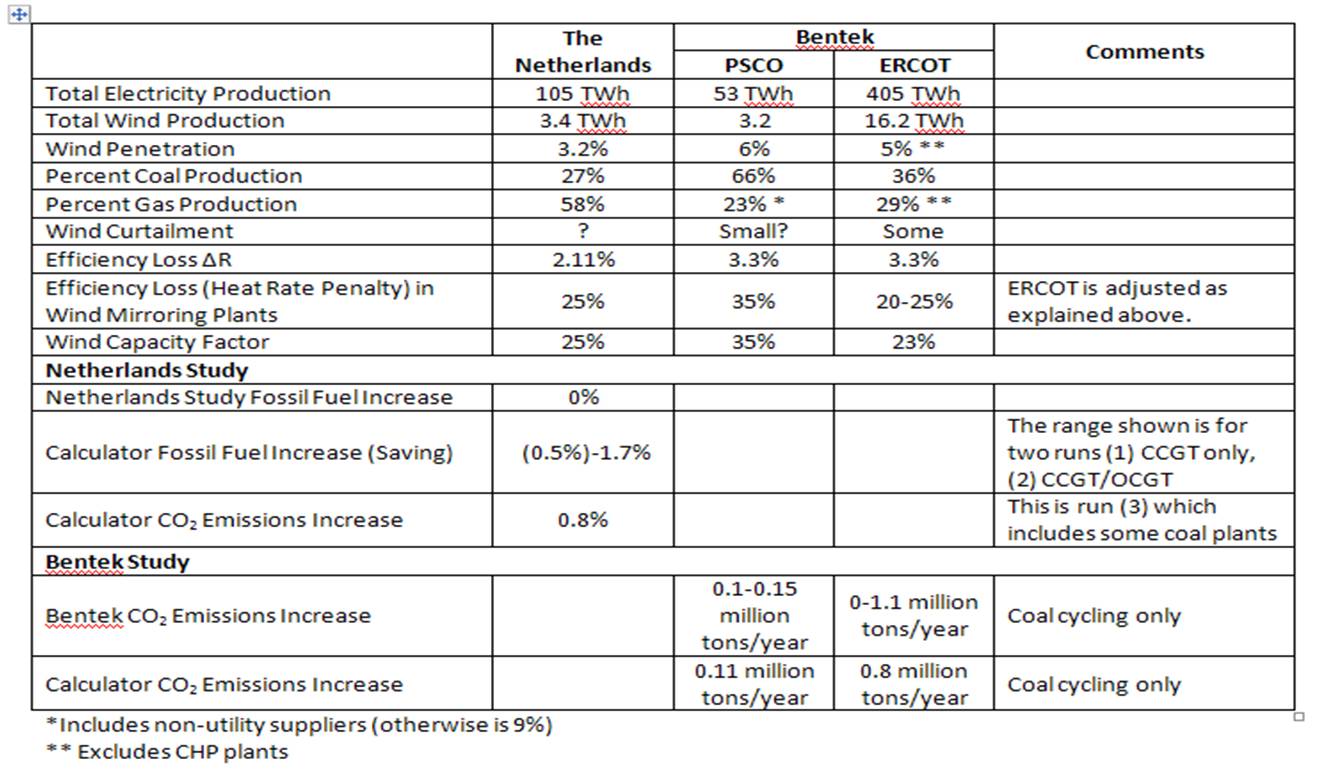 There is a notable consistency among these three approaches. Look for more studies, based on actual experience, to emerge from countries not now dependent on foreign markets for export of wind turbine products and services, confirming the inability of new renewables, especially wind, to contribute to the reduction in fossil fuel use and CO2 emissions reduction in electricity generation. In the absence of comprehensive, objective and transparent studies that finally settle the matter, policies in support of new renewables should be severely curtailed.