“The China study highlights that the government’s push to promote EVs may actually create a greater hurdle for it achieving its goal of restricting CO2 growth.”

Yesterday’s post noted That Tesla’s federal tax subsidies, which apply to the first 200,000 vehicles produced, could be reached and exceeded next year. In such an event, what happens to Tesla’s Model 3 backlog when price-sensitive EV buyers, who have ordered the car, realize it may be delivered without the tax subsidy?

The answer might be seen in the EU, where EV tax subsidies have been cut, leading to a sharp fall in sales. This recently occurred in Hong Kong, as I described last week. But other countries have put EV subsidies, and thus EV sales, on the bubble.

Critics of EV studies such as that of Bloomberg New Energy Finance (NEF) point to the recent history of oil consumption in Norway, one of the leading EV success stories. Very generous tax subsidies coupled with significant operational favoritism – free tolls and parking as well as access to high occupancy travel lanes – have spurred EV sales.

At the end of 2016, the country had slightly over 135,000 EVs registered, out of a total fleet of roughly 2.7 million vehicles, representing about a 5% market share. This has happened at the same time that oil use has been essentially flat or risen slightly since 2011. Oil use climbed in both 2015 and 2016 based on the latest energy data from BP, years when EV sales in Norway soared.

Figure 1.  Norway’s Oil Use Suggests No Impact from EVs. 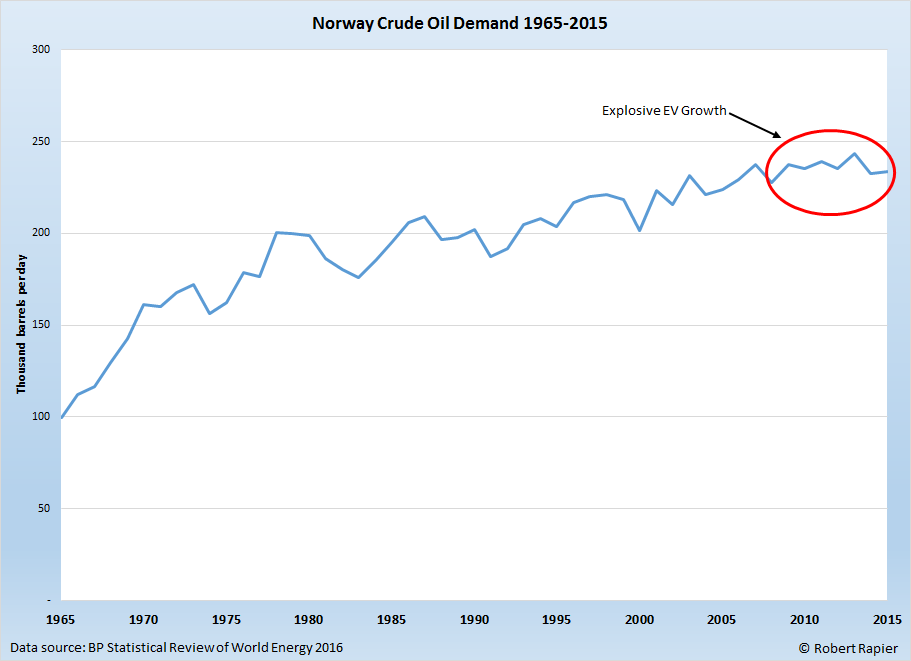 How is it possible for one of the leading countries embracing EVs to have higher gasoline consumption?

From our investigation, it might be happening due to a large number of EVs representing second, third or fourth cars owned by Norwegian families. It is possible that many commuting trips utilize EVs for their fuel-efficiency as well as free highway tolls, quicker access into city centers and free parking benefits.

Many Norwegian families may be using their larger, gasoline or diesel powered cars for their longer trips due to the hassle of charging EVs and their limited range.  An examination of BP’s data on oil consumption in other EV-popular countries – Sweden, Denmark, and the UK – show a similar oil use trend.

Finland’s oil use is nearly flat over the last five years, as was oil demand in the Netherlands, although it experienced a sharp yearly increase last year. While Norway’s data suggests that tax subsidies have distorted the economics of EVs, the fact that a large percentage of them are secondary family vehicles supports the view that these vehicles remain a niche product.

Norwegian auto experts suggest that the transition from early EV adopters to them becoming mainstream is a hurdle that may take considerably more time to achieve than forecasters assume. The oil consumption data of other countries would seem, at least superficially, to support that view.

Unfortunately, a deeper dive into the Norwegian oil consumption data shows a very different story that actually supports the impact of EV penetration on gasoline consumption. Exhibit 10 (next page) shows the components of Norway’s liquids consumption, which is compared against the BP oil use data. The growth in liquids used has largely been centered in LPG and ethane, as well as diesel. Gasoline consumption in Norway actually fell by 20% between 2011 and 2016, while LPG grew nearly 40% and diesel increased by 20%. 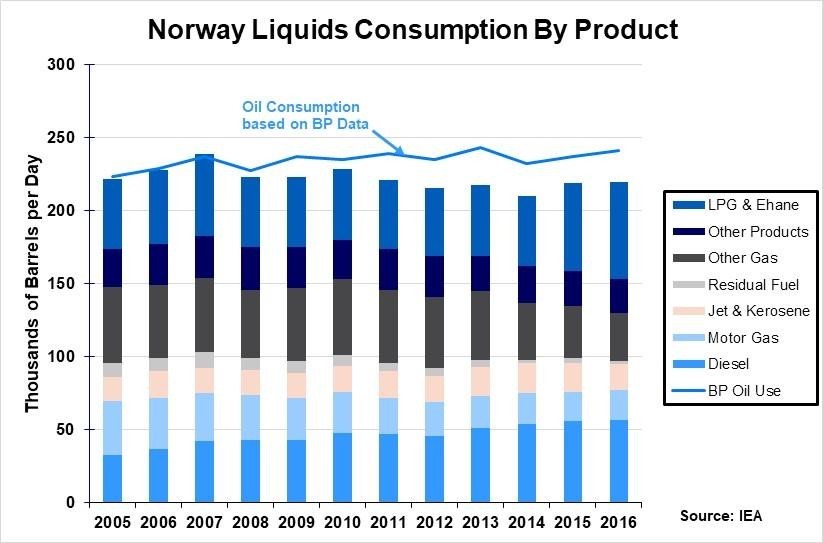 An aspect of EVs now receiving increased attention is the legacy carbon emissions from their manufacture, in particular the production of the battery. In a previous post, I commented on a recent study in Sweden that concluded that the CO2 legacy for EVs was between 150-200 kilos (330-440 pounds) of carbon emissions per kilowatt-hour (kWh) of battery storage capacity.

Using the mid-point of that emissions range and the typical battery size of a Nissan Leaf (30 kWh) and a Tesla Model S (100 kWh), these cars begin life with a CO2 legacy of 5.3 metric tons (MT) and 17.5 MT, respectively.  Applying the carbon intensity of gasoline (8,777 grams of carbon per gallon), the fuel efficiency of an average car (21.6 miles per gallon), along with the typical number of miles driven annually (11,400 miles), all measurements used by the Environmental Protection Agency, the average car generates 4.7 MT of CO2 emissions per year.  Thus, the Leaf’s CO2 legacy would need 1.1 years of driving an ICE to neutralize its emissions legacy, while it takes 3.7 years to offset the legacy of a Model S.

A report with great impact on the global climate change effort was recently published by five scientists with the State Key Laboratory of Automotive Safety and Energy at Tsinghua University in Beijing. It focused on the EV emissions legacy versus ICE cars in China: “Comparative Study on Life Cycle CO2 Emissions for the Production of Electric and Conventional Vehicles in China.”

In the introduction to the report, the authors point to China’s efforts to stop carbon emissions growth before 2030 and then hopefully bring emissions down relative to 2005. The authors wrote about the challenge facing the government’s effort to limit CO2 emissions: “The development of BEV’s [battery electric vehicles] has been prioritized to help achieve the target and BEV production has already become one of the major concerns.”

The authors went on to state: “Since nobody has anticipated the rapid growth of electric drive vehicles in China, the country with [a] relatively weak manufacturing base and coal based energy structure, most of the former studies were based on the manufacturing process in developed countries and paid little attention to China’s case.”

As the world’s largest EV market, understanding the carbon emissions associated with manufacturing EVs in China it is necessary to understand the country’s power industry fuel mix on CO2. It is notable that in the Swedish study, the authors recognized the impact of the fuel powering the nation’s electricity generation where the plants are located.

The Swedish study referenced that most EV emission studies assumed that electricity came from a system powered 50%-75% by fossil fuels. In 2015, Sweden generated 66% of its power from renewable resources and is aggressively pushing to further decarbonize its power industry. As a result, the Swedish CO2 study modified its higher emissions estimates.

The China study completed an extensive step-by-step analysis of the pollution created in manufacturing each component of an EV. The study also performed a series of sensitivity analyses on the conclusions. The study found that an EV employing either of the two popular battery technologies creates either 15,005 or 15,174 kilos (33,011-33,383 pounds) of CO2 compared to an ICE car that creates only 9,985 kilos (21,967 pound) of carbon emissions, or 50% to 52% greater emissions.

The authors also made the point that “Li- ion batteries in the BEV cause huge amounts of additional energy consumption and GHG emissions.” They also observed that “the energy consumption and GHG emissions of several other components of a BEV are also larger than those of an ICE due to the larger weight.” As shown in Exhibit 11, the energy use and GHG emissions for ICE vehicles is well below those for EVs for each component, each material and each energy source involved in the cars’ manufacture.  (ICE is the far left column in each graph.)

Figure 3.  How China ICE and EVs Compare On CO2 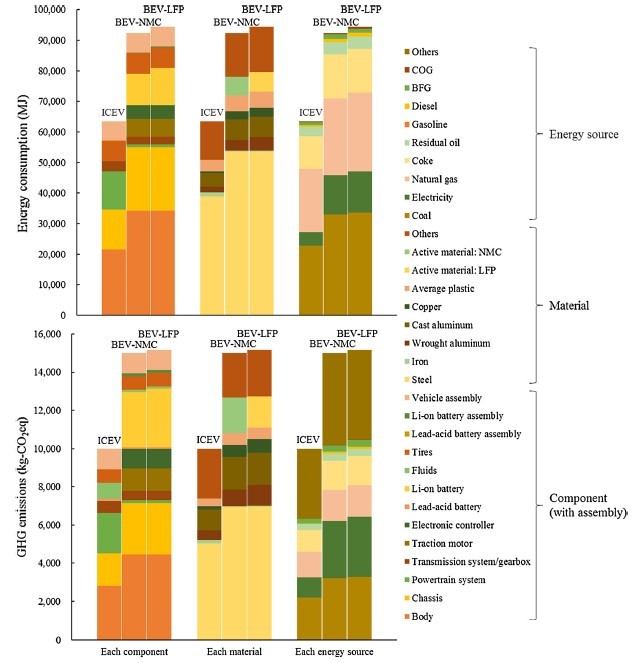 The China study highlights that the government’s push to promote EVs may actually create a greater hurdle for it achieving its goal of restricting CO2 growth. Equally important is understanding that China will not be able to dramatically overhaul its electric power industry anytime soon to make it more environmentally friendly.

As China migrates its power industry to renewables and natural gas, CO2 emissions growth should slow, but that still does not eliminate the CO2 legacy of lithium-ion batteries as shown by both the Swedish and Chinese studies. EVs are not as clean as their promoters would like us to believe.

Despite NEF’s optimistic outlook for EVs, the New York Times clearly summed up the reality: “…it is too soon to write an obituary for the internal combustion engine.” This is to say the least.