“What happened in Denmark was similar to the experience in Georgia, where the state’s legislature voted to end its nation-high EV incentive program of $5,000 per vehicle, and to add a tax to EVs to account for road wear and tear. After the incentive was eliminated effective July 1, 2015, car dealers couldn’t give EVs away.”

“It appears from all the EV data we have examined worldwide that no country has crossed that gap from early movers/EV advocates to mass market appeal. It is all about battery costs, range anxiety, and subsidies. Until there are  significant technological breakthroughs, government subsidies cannot be abandoned.”

Norway is approaching its next election on September 11, 2017, when the 169 members of the legislative body, the Storting, will be chosen for new four-year terms. One of the issues at play in the election campaign is the cost of the country’s generous electric vehicle (EV) subsidy program, which has been a central tenet of the government’s efforts to shift its transportation sector from fossil fuels to electricity.

At the present time, Norway is the world leader in electric cars. About 35% of new cars sold in the country come with a plug. The national goal is to shift its car sales to 100% electric by 2025. Citizens are beginning to question the cost of this effort. After watching what happened in Denmark, the previous leader in promoting clean vehicles, the EV industry is worried about its demise if subsidies are reduced or eliminated.

Until the end of 2015, electric cars were exempt from Denmark’s high taxes on new cars, which could reach as much as 180% of the sales price. Beginning on January 1, 2016, new EVs were assessed a 20% tax on their sales price. Not surprisingly, in December 2015, EV sales soared. The first month of 2016 brought a different EV sales’ landscape as only 68 vehicles were sold compared to the 1,588 sold the prior month when the zero tax rate existed.

Through the first seven months of 2016, 1,332 EVs were sold in Denmark, down 80% from the number sold the prior year. Adding to the competitive automobile landscape was a reduction in taxes on conventional cars, making them less expensive when compared to EVs. On January 1, 2017, the sales tax rate for EVs doubled to 40%, and is scheduled to expire entirely by 2020. As a result, EV sales in the first quarter of 2017 dropped by 60% versus unit sales in the same period of 2016.

What happened in Denmark was similar to the experience in Georgia, where the state’s legislature voted to end its nation-high EV incentive program of $5,000 per vehicle, and to add a tax to EVs to account for road wear and tear. After the incentive was eliminated effective July 1, 2015, car dealers couldn’t give EVs away. Sales of Nissan Leaf EVs plunged from more than 1,000 a month to just 66 in August 2015. So what might happen in Norway if the EV subsidies are changed?

The extensive nature of the EV subsidies in Norway is surprising, but they are acknowledged to have been the driver behind EV growth in the country. The cost of these subsidies is becoming contentious as cited by quotes from politicians in Norway as reported by the Financial Times. The paper prepared an extensive article on the subsidy issue versus the dream of shifting Norway’s car fleet away from fossil fuels.

As Andreas Halse, the environmental spokesman in Oslo for the opposition Labour Party, said, “What we have proven in Norway is that if you give enough subsidies and impose enough restrictions on fossil fuel vehicles, people will buy electric.” He went on to say, “If we want to continue to be an example for the rest of the world, we need to show how this can be commercial. We need to get there because we can’t rely on public finances forever.”

The article interviewed a government employee who drives the 200 kilometers between Oslo and Lillehammer two to three times a week. He drives a Tesla Model S, but he pays no tolls on the highway, saving NKr810 ($96) every week. He also can charge his car at one of the 20 Tesla superchargers along the way for free. In addition, he gets free parking and his car’s purchase was tax free, essentially cutting its purchase price in half.

According to a recent study conducted by the Norwegian Electric Vehicle Association (NEVA), 72% of EV buyers are choosing them for economic reasons and just 26% for environmental reasons. Another NEVA survey of 12,000 EV owners showed that it was not just the big subsidies that influenced their purchase decisions, but also because they didn’t have to pay highway tolls.

The island of Finnoy, near Stavanger, has the highest concentration of EVs in the country because of the NKr150 ($17.75) one-way toll charge in the tunnel connecting it to the mainland. If you are commuting to work through the tunnel, this means a weekly savings of NKr1500 ($177.50).

The impact of the free tolls is significant. According to Mr. Halse, Oslo loses about NKr300 million to NKr350 million ($35.5-41.4 million) a year from the free tolls for EVs. Additionally, about NKr800 million ($94.7 million) of toll revenues goes to subsidizing public transportation per year. He questions whether it makes sense for the local government to spend half as much on EVs that represent 5% of daily commuting trips into Oslo as it does for public transport that accounts for almost 50% of commuter trips.

Relying on new electric-car registration data from the European Alternative Fuels Observatory (EAFO) for 2010 through the first quarter of 2017, we have made an estimate of what these subsidies are costing the Norwegian government. Over the time period studied, which encompasses the period of the government’s EV subsidy largess, a total of 91,688 new battery EVs and 38,920 new plug-in hybrid EVs were registered, representing about 5.2% of the currently estimated total number of passenger cars in the country.

A 2013 study by Reuters estimated that the purchase price (VAT) subsidy for an EV was equal to about $11,000 per vehicle, which they estimated was equivalent to about $1,400 per year per car. The study also cited about $1,400 per year per car in savings from the absence of toll expenses, a $5,000 per year benefit from free parking and about $400 per year in other savings. Based on these estimates, EV owners are benefitting by about $8,200 per year in savings from government subsidies. A Norwegian Green Car group challenged the assumptions in the Reuters study suggesting they grossly overstated the cost of the subsidies. That was not a surprising position, given the group’s focus. The group puts the annual EV subsidy at only $3,336 per vehicle. 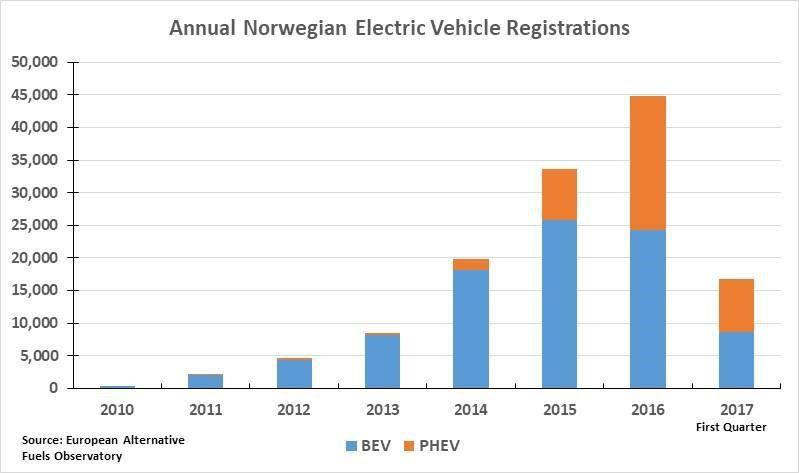 Using the EAFO new electric-car registration data, we have been able to estimate within a range, what the cost to the Norwegian economy has been from the EV subsidies. If we assume that the Reuters annual cost estimate is too high, it is equally as likely that the Green Car group’s estimate is too low. But using each of their annual cost estimates, we arrive at a range within which the likely subsidy cost lies. Over the period of 2010 through the first quarter of 2017, the high end of the cumulative subsidy cost is estimated at $1.07 billion, with a low estimate of $435.7 million.

It is clear that the scale and fairness of the EV subsidy scheme will be an issue in the upcoming Norwegian election campaign. Norway is fortunate that it gets 98% of its electricity from hydroelectric power. That is both a good thing, but also a problem for the government in reducing the country’s carbon dioxide emissions. In 2016, Norway emitted 53.4 million tons of greenhouse gases, up from 51.7 million tons in 1990. The country’s prime minister has stated that emissions will reach the 1990 level by 2020, but that is well above the target established eight years ago when Norway said it would reduce greenhouse gas emissions 30% below the 1990 level. As Christina Bu, secretary-general of Norway’s Electric Vehicle Association put it, “We can’t close a coal plant unlike many countries. So, transport is pretty much the answer.”

That sentiment explains why EVs and their subsidies are being targeted in the upcoming election campaign. From Mr. Halse’s opposition viewpoint, (he does own a Leaf), “It’s a reality check – per trip a lot more is spent on electric cars than on public transport and I don’t think anybody intended that to be the case. We need to find a way for it to pay for itself, not just for us but because it’s important for the development of electric cars all over the world. You can’t expect Germany, France or Italy to hand out subsidies on this basis.”

The counter to Mr. Halse’s view is that of Ms. Bu who suggested, “I have been worried about pulling the plug too early on incentives. We need to have higher sales before we think about removing them [subsidies].” On the other hand, Ms. Bu pointed out that “Crossing the gap from early movers to early mass market is hardest. It’s too early to remove the incentives.”

It appears from all the EV data we have examined worldwide that no country has crossed that gap from early movers/EV advocates to mass market appeal. It is all about battery costs, range anxiety, and subsidies. Until there are  significant technological breakthroughs, government subsidies cannot be abandoned.

Norwegians may find out whether subsidies can be reduced or eliminated without killing EV sales, but the country continues to face an emissions reduction challenge necessitating more EVs. Norway will be pressed by the environmentalists desirous of seeing that the Paris Accord has a bite to its bark.